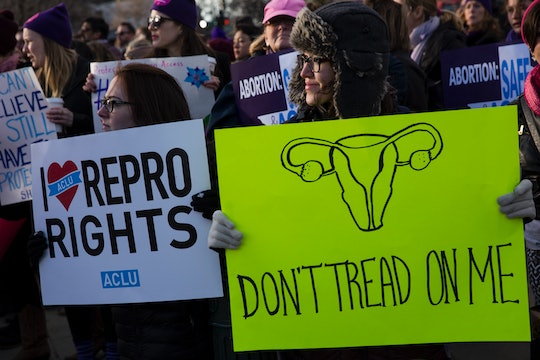 Republican politicians tend to characterize themselves as great defenders of the Constitution. But last week, the Republican-majority Oklahoma state House of Representatives passed a state senate bill that would effectively outlaw abortion there, in a country where Roe v. Wade is the law of the land. The bill would classify the procedure as "unprofessional conduct" and therefore subject physicians who perform it to the possibility of at least a year imprisonment and and revoke their state medical licenses. This Oklahoma abortion bill should make pro-choice activists everywhere mad, because, in addition to being "plainly unconstitutional," according to The New York Times editorial board, it outrageously and illegally subverts doctors' judgment.

The abhorrent SB 1552 must secure final approval in the state's senate before it heads to the desk of Republican Gov. Mary Fallin, who hasn't publicly discussed whether she'll sign it. But other harsh abortion restriction measures in the state have recently won her official approval, including the establishment of a 72-hour wait period and a (later blocked) ban on the most common form of second-trimester abortion. Perhaps most disturbingly, the proposed bill does not include exemptions for a woman's health or instances of rape or incest, and it could cause doctors to leave the state as their autonomy is trampled.

Efforts to legislate women's bodies, are not, unfortunately, anything new in Oklahoma or the United States. Last month, for example, Indiana Gov. Mike Pence signed a bill that intends to stop women from getting abortions based on their motivations, financial status and medical history. The "adamantly pro-life" governor also signed off on a bill that forces medical professionals to provide anesthetics to fetuses beyond the 20-week mark, based on the medically unsound idea that fetuses can feel pain.

“Oklahoma politicians have made it their mission year after year to restrict women’s access to vital health care services, yet this total ban on abortion is a new low," Amanda Allen, Senior State Legislative Counsel at the Center for Reproductive Rights said in a statement. "When abortion is illegal, women and their health, futures, and families suffer."

And it seems that lawmakers intent on passing the bill — which, I may have mentioned, is illegal — aren't interested in even half-heartedly employing the guise that it would work in women's best interests. Bill co-sponsor Rep. David Brumbaugh said during debate over the bill last week that it was, simply, "moral and right."

The fact that these legislators seek to impose their misguided morality on women's bodies is problematic, to say the least, and infuriating. Oklahoma lawmakers know that their actions will result in a prolonged and unnecessary legal battle. Anti-abortion lawmakers have been empowered to restrict abortion access by lying to women about the risks of abortion an imposing senseless wait periods (for morality!), Vox reports. That doesn't mean they can override Supreme Court decisions, writes Emily Crockett:

But one still cannot simply pass blanket bans on abortion. The court has been very clear on that. Unless and until Roe v. Wade is overturned, passing laws like these will always to be a waste of time and money for states. The laws will be blocked immediately and overturned eventually, but not before a lengthy litigation process is complete.

The latest out of Oklahoma is seems to dip even below the barely dignified realm of politics to a plane where a group of mostly men use their platform to knowingly disregard the Constitution and make symbolic gestures in support of their own moral and religious beliefs. Not only is this wrong-headed and unproductive, but it distracts our elected officials from tackling real problems, like deficiencies in education and food insecurity. It's not just the pro-choice activists who should be fuming.