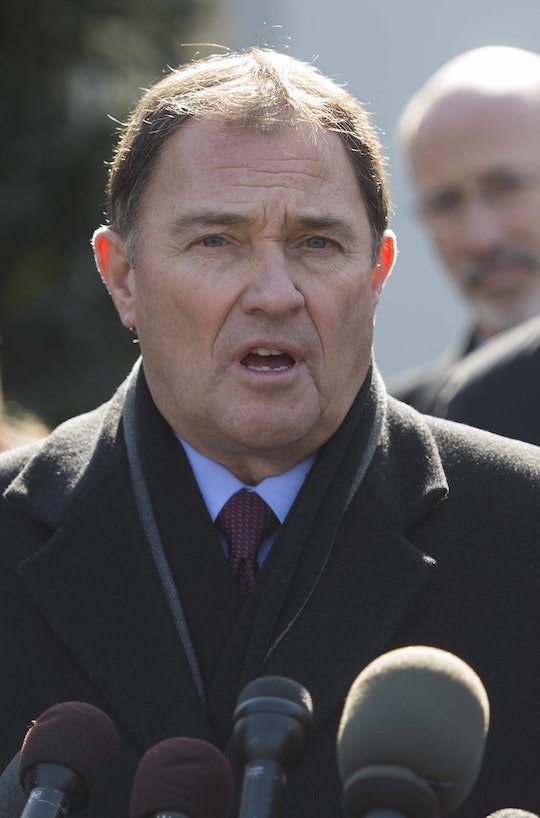 Utah's Fetal Pain Abortion Bill Is Awful For So Many Reasons

Can a fetus feel pain at 20 weeks? According to the governor of Utah, yes they can. A new law was passed on Monday requiring doctors to provide anesthesia to women having abortions at 20 weeks and beyond, the idea behind this being that a fetus can feel pain during the procedure. This fetal pain abortion bill is awful for so many reasons.

"The governor is adamantly pro-life," read a statement from Gov. Gary Herbert's office. "He believes in not only erring on the side of life, but also minimizing any pain that may be caused to an unborn child."

According to The Salt Lake Tribune, this law is the first of its kind. Many detractors, whether Planned Parenthood activists or those in the medical field, are crying foul, perhaps because the science behind this decision is shoddy at best.

In contrast to the claims made by those in support of the bill, the general consensus in the medical community is that a fetus cannot feel pain at 20 weeks of gestation. There are medical professionals who feel this law, called the Protecting Unborn Children Amendment, isn't about saving a fetus from feeling pain, but a way to halt abortions in the state of Utah. Abortions in the state of Utah are already prohibited at 22 weeks, when the state feels the fetus could be viable. Much to the dismay of abortion rights' activists, this new, more stringent law feels like a step in the wrong direction.

Supporters of the bill argue that the anesthesia would theoretically keep the fetus from feeling pain, a fact which has been disputed in the medical community at best. But one fact not up for dispute? The administering of anesthesia or analgesic during pregnancy, which could very well cause complications for the woman having the abortion.

Dr. Anne Davis, the medical director for the Physicians for Reproductive Health organization, recently shared her feelings on the matter with CNN, saying:

Imagine that I sit down with a patient and tell her what she can expect and how I'm going to take care of her and somehow I work in, "Oh, by the way, the state has told me that I have to give this to you?" She asks, "Why?" And I say, "There's no benefit to you, but there will be additional risk." How as a doctor do I live with that? This law is about stopping abortion. This is just another measure to deter women from getting abortions.

Dr. David Turok of the University of Utah's obstetrics and gynecology department agreed, telling CBS News this week, "You never give those medicines if you don't have to."

Not only does the law require doctors to reportedly cause undue harm to the woman electing to have an abortion, it clearly seems to be an attempt at shaming them. It also feels like an attempt to make women rethink a decision that probably felt very difficult from the beginning.

Republican Senator Curtis Bramble sponsored this bill after his initial plan to ban abortions at 20 weeks was deemed unconstitutional. (As a little aside here, can I just say that these two dudes making decisions about abortion don't have a uterus between them? OK, I said it. Moving on.) Which goes to show that the pro-life politicians seemingly will stop at nothing to get their way.

Naturally, there's some agreement in the anti-abortion community that this bill was the right thing to do. But in the end, this law feels like a massive leap in the wrong direction. A step back not in years, but in decades, to a time when we didn't get to make choices about our own bodies. And if we dared to try? Well then, shame on us.

Let's not go back there.