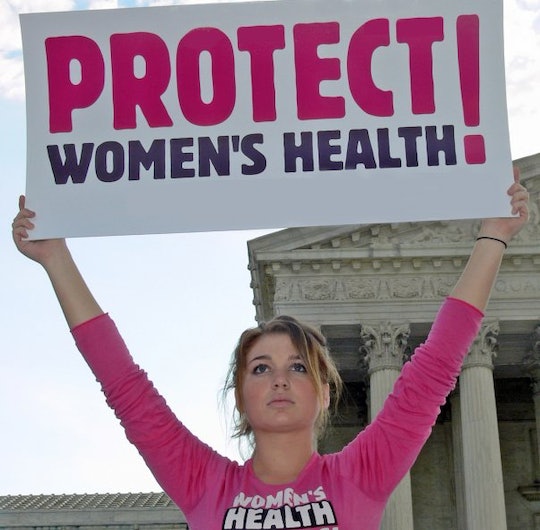 Soon after he stormed a Planned Parenthood clinic in Colorado Springs with a semiautomatic rifle in November, killing three people and wounding nine, 57-year-old Robert Lewis Dear gained a reputation in the media. The Planned Parenthood shooter, whose motives were recently made clear in unsealed court documents, was an anti-abortion evangelist with violent tendencies, The New York Times reported. He was an "occasionally violent" man and, despite a slew of shattered marriages, a "recluse."

But Dear was certainly not alone.

Before the attack, Dear sought out and praised other extremists online, including a Christian terrorist organization called the Army of God. According to the newly unsealed court records, Dear used the internet to cultivate an unwavering allegiance to a man named Paul Hill, who positioned himself as a spokesperson for people thinking about killing abortion providers before actually murdering one himself, as well as the doctor's bodyguard, in 1994.

Similarly, when he was arrested for the Planned Parenthood clinic shooting back in November, police claimed that Dear had allegedly exclaimed "no more baby parts" upon opening fire, ostensibly a reference to a heavily edited undercover video taken inside a Planned Parenthood of a doctor discussing forms of legal tissue donation.

Dear's apparent self-radicalization as he virtually ingratiated himself with people and groups who apparently view themselves as crusaders for the unborn is a terrifying reality. In 2015, the National Abortion Federation (NAF) reported that violence against abortion providers and the women who receive abortions had hit an all time high, as both groups continued to be demonized by the public.

The vast majority of anti-choice activists do not end up shooting down innocent people in an abortion clinic. But their rhetoric and beliefs permeate mainstream politics and even inform legal policies in individual states that restrict a woman's right to make her own health choices by determining what's right for her life and her body.

Conservatives' near-constant attacks on a woman's right to choose consistently disregard medical science and trumpet an unrealistic moralist agenda. For example, in March, Republican presidential candidate Donald Trump told MSNBC’s Chris Matthews during a town hall style interview that women who receive illegal abortions should be subject to “some form of punishment.” (Trump was later forced to recant his statements due to heavy criticism from both parties, but the damage was done.)

And last month, the Food and Drug Administration changed its guidelines to enable use of the abortion pill to finally catch up with science, after Republican lawmakers fought to make access unnecessarily difficult. Around the same time, Indiana Gov. Mike Pence signed a bill that could use women’s motivations, financial status, and medical history to prevent them from getting abortions, a move that deemed decidedly unsafe for women. (It also inspired the hilarious #PeriodsForPence hashtag/campaign, but that's a story for another day.)

And that's just what's been going on lately.

During a court appearance in December, Planned Parenthood killer Robert Dear said that he was guilty. The he declared himself "a warrior for babies."

That attitude is inherently dangerous. Politicians — most of whom are male — and anti-abortion activists believe they are protecting fetuses with their restrictive policies and their moral imperatives. But what they're really doing is hurting women: The Guttmacher Institute, for example, reports that 45 states allow health care providers to refuse to participate in abortion, and 28 states impose needless "wait periods" on women seeking abortions, between when they receive counseling and the procedure itself. Twenty-five states require both parents' consent for a minor to have an abortion.

According to a recent New York Times op-ed, the Guttmacher Institute also found that there were more than 700,000 Google searches for how to self-induce an abortion in the United States 2015. The state with the most searches for D.I.Y. abortions? That would be Mississippi, which has just one abortion clinic. Simply put, as abortions become harder and harder to come by in the United States as a whole and in certain states in particular, abortion rates won't decrease — instead, desperate women will attempt to terminate unwanted pregnancies by unregulated and dangerous means.

Both the Planned Parenthood killer and GOP lawmakers believe they have the utmost regard for human life. They need to ask themselves whose well-being they really value.