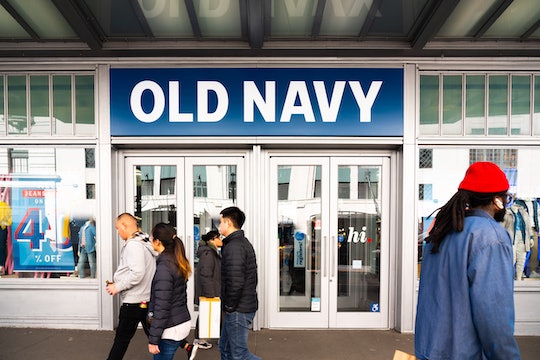 Here's another reason to go buy yourself (and everybody else in the family) some new jeans: Old Navy will pay employees to volunteer at the polls on election day this year. Because this year's election is going to be arguably one of the most important in our lifetime, and Old Navy wants to make sure that people have all the support they can possibly want when it comes time to voting.

As explained in a press release from Tuesday, which also happened to be National Poll Worker Recruitment Day, Old Navy is going to do more than simply give their employees time off on election day to ensure they can vote. They're going to pay them to volunteer at the polls.

"We are constantly inspired by our store teams, with their passion for community work and fostering a sense of belonging both in and outside of our store walls," Nancy Green, head of Old Navy, explained in a statement.

"Every voice in this country matters and deserves to be heard at the polls, and if we at Old Navy can be even a small part of making that process more accessible to the communities we call home, we are on board."

This could certainly help out with the poll worker shortage that has become a serious cause for concern for the 2020 election, as per CNN. The news outlet reported that thousands of older, at-risk poll workers have backed out for this year's federal election in November due to pandemic fears.

Old Navy has offered to compensate store associates and other employees if they volunteer to work at the polls on Tuesday, Nov. 3 in addition to being paid for their regular working hours for that day in partnership with Civic Alliance and Power The Polls. Old Navy employees will also be eligible for compensation from local jurisdictions for their work at the polls on election day.

Several other big corporations have rolled out voter engagement initiatives in recent weeks. Starbucks, for example, has pledged that its employees won’t have to choose between working their shift and voting on or before Election Day. But Old Navy's decision to pay their employees is important for reasons beyond ensuring people can safely get out to make their voices heard on election day. Around 64% of Old Navy staffers are between the ages of 18-29, which tends to be the demographic with the lowest voter turn out, historically speaking. So getting their employees passionate about the vote is important in and of itself.

Everyone needs to vote this year. And Old Navy is helping make sure that happens.

Editor's Note: This article has been updated to clarify Starbucks' voter engagement initiative.