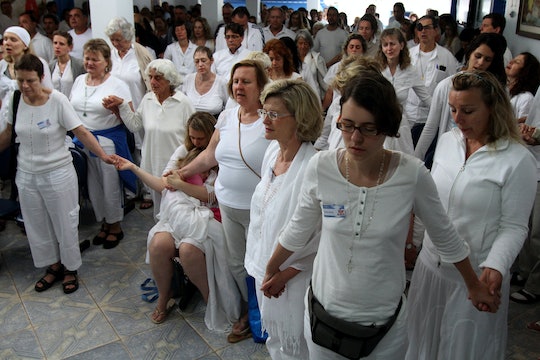 Olive Heiligenthal & The Transcendent Pain Of Losing A Child

After seven days of believers all over the world praying for the resurrection of 2-year-old Olive Heiligenthal, her family made the decision to move forward with a memorial service. Olive’s mom, Kalley Heiligenthal, is a worship leader and songwriter at Bethel Church in Redding, California, and called for people to pray for a miracle on Instagram last Sunday, writing that her daughter had been pronounced dead after Olive suddenly stopped breathing. “Her time here is not done,” wrote Kalley, “and it is our time to believe boldly, and with confidence wield what King Jesus paid for. It’s time for her to come to life.”

We have all utilized both healthy and unhealthy coping strategies when it comes to loss and trauma. We do what we have to in order to survive the pain. I understand the desire of a church community in mourning wanting to do their best to honor the wishes of hurting parents who want nothing more than to have their baby back. Olive’s death, though, took place in the context of a church community focused on the miraculous and supernatural.

A main point in Bethel’s mission statement is “Every believer is a supernatural minister of the gospel of power. All ministry flows from the prayer ‘Thy kingdom come... on earth as it is in heaven.’ We equip and send the church to carry on the signs and wonders that followed Jesus.”

One aspect of their ministry is equipping groups from their church to go into the surrounding community and do something they call “treasure hunts.” This is where they ask God who needs prayer and then pray prophetically for that person — many times with the desire to see the supernatural manifest right in the grocery aisle or at the gas pump, as Buzzfeed previously reported.

I grew up in a small rural town in West Virginia, but unlike many of my fellow Bible Belters, I didn’t grow up regularly attending church and spent most of my life as an atheist. After becoming a Christian in my mid-twenties, following the end of a decade-long abusive relationship, I spent the next decade of my life fully immersed in charismatic Evangelical church communities very similar in mission and ideology to Bethel Church.

While I have not personally attended any church services at Bethel Church, I have watched services online, read many books written by their top leaders, listened to many of their worship albums through Bethel Music, and have followed their journey as a church. Many of my friends have attended the Bethel Supernatural School of Ministry or have been a part of their healing rooms or church services. So while I may not have first hand experience within the Bethel Church community, I have attended a church that modeled itself after Bethel church with its own version of the healing rooms, worship albums, and prophetic teachings.

I have never personally witnessed any miracles like this despite the fact I very much believed I could, would, and should.

My beliefs and opinions about God and miracles have changed drastically since officially leaving Evangelicalism several years ago. I have questioned everything I thought I knew about God and am just now rebuilding my faith from the ground up. But one of the more complicated conclusions I’ve tried, and failed, to come to is what I believe regarding miracles, signs, wonders, and the supernatural as far as God is concerned. One of the main tenets of the Christian faith, as well as many other religions, is believing in what we cannot see or understand. And it is the belief in things unseen that brings so many people of faith hope during hard times.

During my church-going years, I heard many stories of supernatural events and healings, including bodily resurrections but I have never personally witnessed any miracles like this despite the fact I very much believed I could, would, and should. The reaction of Olive’s parents is not surprising to me, although it may be to some who are not familiar with this kind of charismatic church community. But if you, like so many who flock to churches like Bethel, had been told story after story of people in Zimbabwe or Russia being raised from the dead even after several days, would you not be tempted to try and conjure the same miracle for your own precious child?

The desire and need for miracles has affected every human throughout the history of the world. To be honest with God about our desires, including wanting our sweet child to live again, is healthy. To ask God for what we need and want is a core practice of the Christian faith. But there is a difference between asking God for a miracle and using God’s Word to chase after spiritual superpowers.

When you are immersed in this kind of prophetically focused church community, and you surround yourself with only those who “get it,” you don’t leave much room for critical thinking and healthy accountability. In fact, critical thinking is outright discouraged, because critical thought is believed to be the antithesis of bold faith. To criticize the miraculous was to have a cynical spirit. And a cynical spirit is seen as a poison to the church community.

It wasn’t until I left Evangelism that I realized that instead of growing a healthy understanding and desire regarding the miraculous, I had become a superpower chaser with a terrible track record. My desire to see a miracle became much more about needing proof of God’s existence and my ability to wield the power of God than it was about learning how to grieve with those who were in pain or sit with those who were hurting. If I could just pray away their pain, then I wouldn’t have to learn to navigate death, illness, loss, and pain with those around me. I was more concerned about “God with me” instead of Emmanuel — God with us. If the focus of our faith is more on the supernatural than on loving well, then our faith is more easily swayed based on whether we feel we have received the miracles we wanted or not.

Perhaps we have miracles all wrong. Sitting with someone in their pain and sorrow with no caveat on how long they can be in pain and how they will express it — that is to be in the midst of the miraculous. To help carry the burdens of life with someone is Holy. Wishing hardship and pain away and telling people God never wanted them to suffer or die or be in pain heaps guilt and shame on top of loss. Acceptance of loss allows us to begin our journey through grief.

I believe that instead of focusing on whether or not God could heal in this way, we should be asking ourselves why would God heal in this way? What is the benefit to the world for a god that would heal some and not others? Every time I have asked this question to those who believe in supernatural miracles from God, I get a response along the lines of “We shouldn’t question God. God’s ways are not our ways. God’s ways are higher than our ways.” But I have never found that to be a satisfactory answer.

More Like This
43 Awesome Toys For 18-Month-Olds
These 9 Potty Training Techniques Will Work On Even The Most Stubborn Toddler
Here's How To Handle Potty Training During Nap Time
How Often Should A Toddler Pee When Potty Training? It Depends