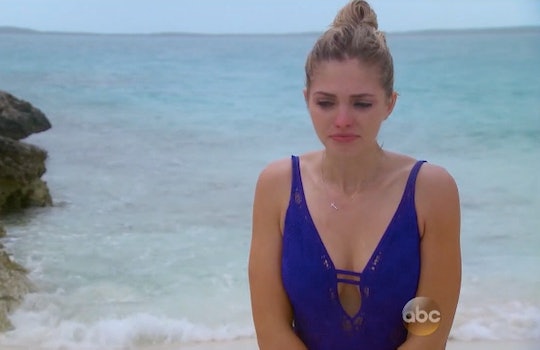 We knew that Olivia was on the chopping block during this week's Bachelor (which found the girls on a variety of picturesque islands in The Bahamas) when it was announced that she'd be one of three wheels on a two-on-one date with Ben and Emily. Naturally, Ben chose the two sworn enemies of the house to go on a date with him, knowing that only one of them could get a rose at the end of it. Still it was a bit of a shock when, a short time later, Olivia got dumped.

The weather seemed to predict the date's stormy outcome, with the wind buffeting Ben, Olivia, and Emily (The Bachelor's remaining twin) on the beach as they tried to enjoy a bottle of wine. Each of the women had the chance to speak with Ben one-on-one to make their cases for why they should stay. Olivia droned on about her impeccable self-awareness and didn't really let Ben say very much. Then, after her monologue about what a serious, smart person she is, she dropped the "I love you" bomb.

Emily's one-on-one conversation, by contrast, demonstrated actual self-awareness, when she admitted that she still had a lot of growing to do — but that she wanted to grow with Ben, and for him to watch her grow. He seemed to take it to heart.

Taking Olivia aside later, Ben told her that, unfortunately, he couldn't reciprocate her feelings of love, and Ben and Emily boated off back toward the main islands, leaving Olivia behind on a windy, cloudy, stormy sand dune.

But this wasn't the most dramatic moment of the episode by a mile (even if it was the most satisfying). Earlier in the episode, Leah got unceremoniously dumped in The Bahamas too when she couldn't stop talking about Lauren B. behind her back to Ben.

In addition to all that, Caila almost seemed to send herself home on her one-on-one date at one point, but the perpetually cheerful contestant saved it at the last moment by playing it off as being willing to "sort things out" with Ben when she felt confused or conflicted in her feelings for him.

And if two breakups weren't bad enough, poor Ben still had to endure a rose ceremony — though, thankfully, producers let him skip the cocktail party beforehand. Sadly, Lauren H. was the final contestant cut, which is a total bummer, because of all the women this season, she, both funny and serious about her intentions, seemed to nail the balance between bubbly and grounded.

In teasers for upcoming episodes, it seems like the "I love you's" will start flying out of more mouths than just Olivia's (sidebar: RIP Olivia's Mouth), with even Ben getting in on the action. Will Ben get over the nagging doubts Leah planted in his mind about Lauren B? Is he actually willing to "watch Emily grow" while he stands by, already a grown-up? Did he actually find Caila's doubts endearing or was he just relieved a woman he once described as "a sex panther" didn't dump him on the spot? Bachelor Nation will just have to keep watching to see how it all unfolds.