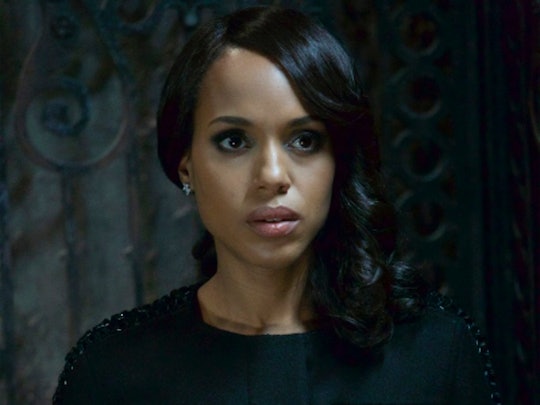 Olivia Had An Abortion On 'Scandal,' & It Got So Many Things Right

Last night’s Scandal mid-season finale featured a scene where Olivia Pope had an abortion. (And if I have to tell you who Olivia Pope is, I’m not sure why you’re reading this; get thee to Netflix and come back post-binge). It happened unceremoniously, unexpectedly, and the storyline moved forward quickly — in fact, Olivia' abortion only got one minute of airtime. No other characters, including her live-in boyfriend, were even aware she'd had the procedure (that we know of). Brief and devoid of dialogue as it was, Scandal’s presentation of Olivia’s abortion was my favorite of any I’ve seen in TV or movies. (Also, there are a lot of spoilers below, but this is not your first day on the Internet, so you should know that by now.)

It’s not weird to have a “favorite” abortion scene, especially when most of them are so completely terrible. If you’re on a TV show and you’re having an abortion, you’re either the “sullied slut who’s also probably a drug addict because why not,” a rape victim, or the “young woman who’s making a sad-but-right decision to protect her future but who will be haunted for the rest of her life by her choice”... and while I suppose all of these representations are accurate portrayals for a small percentage of real women who have abortions, there’s a glaring lack of “grown-up woman who makes a decision to end a pregnancy, schedules an appointment to do so, goes, leaves, and carries on living her life without falling apart.” The latter is exactly what we saw Olivia doing on Scandal, and as weird as it is to think, “Finally! Someone having an abortion experience that feels honest and representative of my abortion experience,” that’s exactly how I felt.

When I was 20, I had an abortion. Before I did, I did a few other things: I talked to my boyfriend; I spent a week locked up in my apartment, going through the should we or shouldn’t we motions of “deciding” what to do with my boyfriend, who wanted me to have the baby, and I pretended like I didn’t already know that I wanted an abortion the second I found out I was pregnant. When I finally made the appointment and had the procedure (my boyfriend was upset and didn’t come with me; my sister did), I spent weeks feeling sad and like my life was falling apart, which it almost did — but it didn’t need to. At all.

Here’s the thing about how I handled my abortion: I was playing a part, even if I didn’t realize I was. I was 20, and had only a negligible amount of life experience — and practically no experience as a genuinely independent woman who had any real grasp on how to steer her life in an empowered, decisive, custom-fitted way. I was in the phase of budding adulthood where you essentially just roleplay what you’ve been taught adults do. I mean, it’s fine, it’s what we all do until we get a little older and realize that what we’ve been taught about “what adults do” or “how adults feel” in various situations — all of which is largely based on what we’ve seen in movies and on TV — is incredibly narrow and ill-fitting for who we are as individuals.

So when I got pregnant, I did all of those things — telling my boyfriend, considering what he wanted, breaking my own heart, letting myself take the blame for breaking his; letting my life fall apart a bit afterward — because those were the lines on the page. That’s what I knew to do. That’s what I thought was normal. I expected to feel and do and say certain things, and the expectation manifested those feelings and prompted me to do those things. Which isn’t to say that I was faking anything — I wasn’t — but the entire way I handled my pregnancy and abortion, both internally and externally, was heavily influenced by pre-existing expectations. And those expectations were pretty firmly established by what I’d been taught to believe about abortion from Hollywood.

I wonder how my own actions and feelings about my abortion might’ve been changed had my brain walked into that experience with a different set of expectations. What if I had been, say, 16 years old, and seen Olivia going alone, confidently, to her appointment — no looping in her boyfriend, no implication that the thing happening inside her body is anyone’s business but her own. And then, to boot, marching home, telling her boyfriend that she wasn’t happy in their relationship, and didn’t think they were headed towards a future that filled her needs, before then going home to her apartment, by herself — not falling apart. What if I had seen Olivia having abortion like it was a part of awesomely choosing what she does and does not want for her life, and how amazingly at peace she seemed to feel as a result?

How might I have felt different about my abortion if Olivia’s abortion had been the scene that colored my expectations when I was 20 years old and staring at a positive pregnancy test?

It’s honestly strange and annoying that TV and movies don’t showcase more instances where women are not just ending up without a baby or a man in a sad context, but are choosing to not have a baby, or to not have a man, in the decidedly positive context of her creating the life she wants for herself. And it really, really matters whether or not we have these depictions because it’s inescapable that young people are influenced by them, and it’s inescapable for their feelings and choices about their own lives will be swayed by these preconceptions. I mean, holy sh*t, I was a strong breeze away from having a baby that I fully knew I did not want, all because I unquestioningly believed, as I had been taught, that whether or not to have an abortion was something that you do with the guy who got you pregnant.

Sure, Olivia could’ve talked to Fitz about it if she’d wanted to, but to make a tiny assumption, it seems like she was really sure about what she wanted to do, in which case talking to him would only open her up in a really scarily vulnerable way, with her love for him and her now-shattered hopes for their future presenting a giant liability that could potentially lead her to choosing something that she already knew she didn’t want.

Instead, we saw Olivia alone in that room, getting an abortion, and that matters so much. Because in the end, that is how every woman gets an abortion: It’s you and your body, and it’s perfectly OK if you and your body are the only ones involved in making that decision. And it’s endlessly beneficial for young women to see that — a woman alone having an abortion, and not falling apart, and ending up happy at home — and have that define her expectations about what it feels like and looks like to have an abortion.

None of this is to say that Olivia's abortion was cast in some casual, glowy, unwrinkled-white-hat light. The 1-minute scene was so flawlessly orchestrated in a way that both refused to strip Olivia of her strength, while also not softening the utterly unpleasant reality of the actual experience of undergoing that procedure. Watching it tugged at some visceral memory of my own abortion; My body remembered what it felt like to be lying there, the feeling of the doctor's hands on me, and the grip of my own around the edges of the table. But it felt... surprisingly fine to be reminded of that, and the fineness of remembering reminded me of the fineness of it happening, and to see Olivia going through that, and to see the whole thing framed in a way that didn't remind me that I was "supposed" to feel ripped apart by that particular moment in my medical history.

So why can't we have more abortion storylines — storyblips might be a more accurate descriptor — on TV? Why does it feel so necessary to make an abortion something tragic and terrifying and shameful? Are we at a point where, OK, we support a woman's "right to choose" but goddamnit, she better feel really bad about that choice or else she's a monster? To feel OK about a woman having an abortion, do we need to see her agonizing over the decision? Do we need to know that choosing to handle a pregnancy in that way is the heartbreaking conclusion of a tortured decision-making process? Do we need to know that a woman is scarred and traumatized and genuinely f*cking upset about her abortion in order for us — the faceless, judging public — to not hate her for it (and we still might anyway)? The only thing more satisfying and more peaceful than getting what you want is recognizing that you’ll never get what you want, accepting it, and giving up the pursuit of the thing you know you can never have.

Unmistakably, we see Olivia upset after the abortion; rooting around in her cavernous White House closet for the moonshine bequeathed to her by her predecessor, the former First Lady (who spent the entire episode filibustering in opposition of a Congressional budget that would've stripped Planned Parenthood of its funding, because it’s apparently time to get serious about planting the narrative seeds of Olivia running Mellie’s inevitable presidential campaign). As Liv chugs the moonshine (as a Southerner, I call LIES on how hard she put that sh*t away) and fights with her pissed-off boyfriend about some fancy dinner she skipped while off getting her abortion, we can clearly see that she’s not in a great place. But then a weird and telling and amazing thing happens: She never mentions the abortion. She never even casts a patented, subtext-laden, sideways, wincing look that at least lets the audience know that she’s currently channeling all of her ~tragic abortion sadness~, even if she’s “stubbornly” refusing to tell Fitz about it (which she never ends up doing). But none of that happened, and that’s amazing.

To be clear about “falling apart,” Olivia didn’t.

She did not break up with Fitz because she was f*cked up in the head about her abortion. And she didn’t have an abortion because she was mad about all the outfits he kept trying to dress her up in, although undoubtedly all of that is interconnected. But Liv didn’t tell Fitz about the abortion during their break-up fight because it wasn’t relevant. The abortion and the breakup were both (messy and unpleasant, yes) about Olivia saying, “Nope. This isn’t what I want. I know what I want. I tried this thing, and it doesn’t feel right, so I’m out.” It was her getting out, so she could move on, and try to find something else that might actually make her as happy as she knows she deserves to be.

Having an abortion doesn’t look beautiful; breaking up doesn’t look beautiful — but there’s a difference between pulling things apart because it wasn’t built correctly, and things falling apart. Olivia did not fall apart last night. And the truth is, neither do most women when they have abortions. For most women, having an abortion is just one unglamorous task in an ongoing mission to put together all the pieces of the life we want. It’s a quiet and unremarkable appointment that we go to, and we take care of our bodies, and then we go do whatever else we have to do, and we go home feeling better about the things we’ve gained from making empowered choices about our lives, far more than we feel upset about the loss of the things we didn’t choose. And perhaps a great many more women would experience abortion this way if more TV and movies taught them to expect that they might.