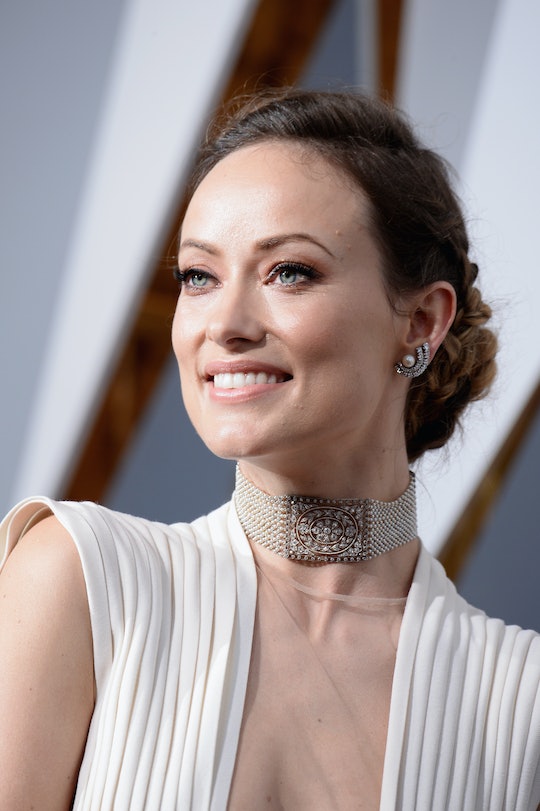 Looks like someone has been promoted to big brother! On Monday, actress Olivia Wilde announced she's pregnant on her Instagram feed, showing off "matching baby bumps," as she put it, when captioning the candid black-and-white photo with her almost 2-year-old son, Otis Alexander; Otis turns two on Wednesday. This will be Wilde's second child with fiancé Jason Sudeikis.

Wilde, who recently turned 32 last month, has not yet revealed a due date or gender. When Wilde was pregnant with her first child, she excitedly revealed both the gender and due date just a few months before Otis was born. Two weeks ago, she did tell People Magazine that she's "desperate for more kids." Wilde also shared that her son Otis "loves little babies," so I imagine he's taking the big brother news pretty well.

A recent tweet from Wilde lamenting about her Uber driver's cologne "#deathbydrakkar" suddenly makes a lot more sense in the context of her pregnancy announcement — it's known that many pregnant women have a heightened sense of smell, particularly during the first trimester. Her actor and comedian fiancé Sudeikis has not yet publicly commented on their exciting announcement.

Sudeikis and Wilde began dating in 2011 and got engaged in January 2013. Since then, the pair has been dogged by the perpetual question: When are Sudeikis and Wilde getting married? Contrary to rumors about a "secret wedding" this past January, they have each said that they're in no rush. Even after almost two years since the birth of their first son, and now with news that No. 2 is on the way, the couple has no immediate wedding plans. Wilde told The Edit in February that having a child with Sudeikis might even supersede the need to be married:

With Wilde's adorable pregnancy announcement on Instagram, her fans can be sure to look forward to even more photos of Wilde and Sudeikis family fun on her Instagram feed. Wilde hasn't been shy about been sharing wonderfully candid photos of her son. Otis made his Instagram debut in a sweet photo of him peeking over his mom's shoulder when he was just three months old:

Some of Wilde's photos of her family have been met with tabloid controversy. In December of last year, she received plenty of internet backlash when she posted a photo of her naked son donning a cowboy hat — a cute photo taken from behind. Some critics online took umbrage with naked baby butts, apparently. The actress was unapologetic for the photo and was fiercely proud of her family.

With her second baby on the way, more adorableness is sure to abound on her Instagram feed.