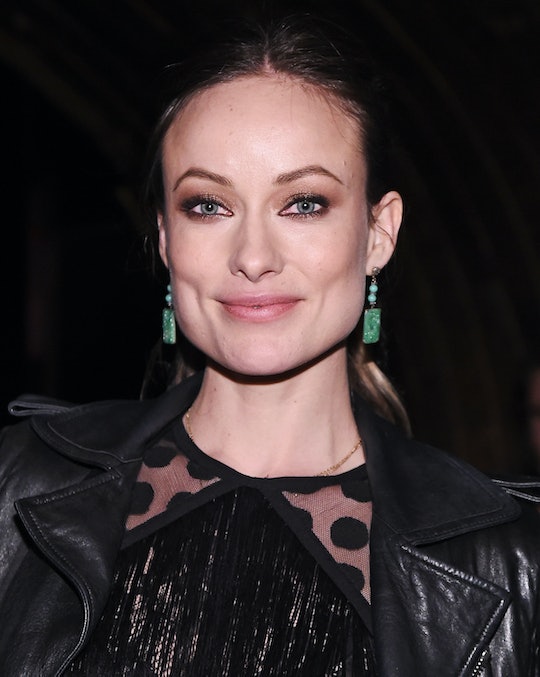 Olivia Wilde is a lucky woman, and she knows it. She has a successful career, a handsome/hilarious husband, and very amazing cheekbones. She is also pregnant with her second child... and that pregnancy was planned. Because she's lucky enough to make her own reproductive decisions. At a recent gala in New York City, Olivia Wilde spoke out in support of abortion access, and her reasons were all of our reasons.

Wilde was the host of the Voices of Courage Benefit on Tuesday, a gala event honoring abortion providers and providers of reproductive health services by New York City's Physicians for Reproductive Health. Wilde is five months pregnant with her second child with husband, actor and SNL alumni Jason Sudekis. She spoke to Cosmopolitan magazine after the event about the importance of access to abortion so that all women would be able to make the same choices about when to have children that she herself was able to make:

In terms of access to abortion, I feel so lucky that I was able to choose when to become a mother, and that in between my two children, I was able to plan that I didn't want to have one right away. I had access to contraceptives to help me make that decision, and [I could decide] when to make the next move for what's best for my body and my family. These are all things that we take for granted and yet, tonight, I realize how many people rely on those physicians in that room to help maintain some modicum of control over their own bodies.

Wilde has become an outspoken advocate for wider access to abortion, particularly since she became a mother herself. And she has certainly seen her share of negative backlash, especially on social media. But she tries her best to take it all in stride:

The negative side of it is this anonymous forum to throw hate at each other. But I think if you're not getting any of that, you're not saying anything worthwhile. So I take it as a badge of honor. You're provoking emotion. And in order for conversations to achieve anything, you have to be provocative because you have to make people feel things. It's not actually OK to just be apathetic about anything.

Wilde is clearly anything but apathetic about abortion advocacy. After Tuesday's event, she posted a picture of Dr. Colleen McNicholas, a doctor working in the only abortion clinic in Missouri, who won an award for "outstanding courage in hostile and challenging environments." Wilde praised Dr. McNicholas and all the doctors present, and captioned the photo with these words: "As a human being, a mother, and a pregnant lady who loves babies, I am deeply inspired by everyone I met tonight."

So yes, Olivia Wilde is a lucky woman. She has fame, beauty, success, love, and the ability to make her own reproductive decisions.

May we all be so lucky.

More Like This
Olivia Wilde Got Candid About Co-Parenting Jason Sudeikis & Life As A Single Mom
New Report Shows 80% Of Pregnancy-Related Deaths Are Preventable
How Much Hair Loss Is Normal? 9 Signs You’re Losing Too Much Hair
6 Sex Positions To Reduce Leg Pain