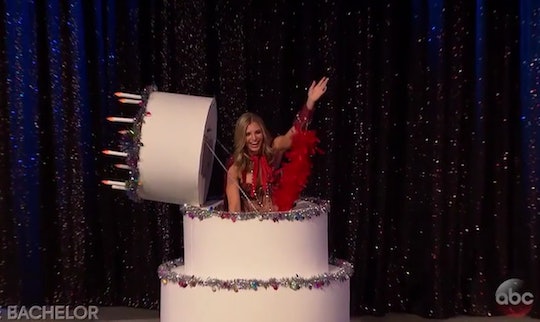 Olivia's Talent Is Strip Tease, But That Doesn't Mean Anyone Should Shame The 'Bachelor' Contestant For It

Proving she's a little bit country, a little bit rock n' roll, Olivia lets her wild side show on Monday's new episode of The Bachelor. According to ABC, the erstwhile news anchor steps out of her comfort zone (and a cake) to perform a showgirl-inspired routine at a talent competition held during a group outing in Las Vegas. But while fans will likely have mixed opinions about the performance, slut-shaming Olivia's strip-tease talent should be the last thing on everyone's mind.

Us Weekly released a sneak-peek of Bachelor episode four on Monday, in which the ladies take part in a competition to be the opening act for Vegas ventriloquist Terry Fator's show. (Fator is a former reality show winner, taking home top honors in America's Got Talent in 2007.) I guess fans will have to wait to see which lady will win that coveted spot, but from the sneak-peek, I'm gonna put my money on Olivia.

While I wouldn't exactly call Olivia's moves Beyonce-worthy (okay, not anywhere in the realm of Bey's dancing prowess), there's a certain awkward charm about her cake dance that's very Vegas. And very entertaining. Her cast mates, however, don't seem to feel the same way. In the same sneak-peek video, contestant Amanda can be seen saying, "I'm not really sure if jumping out of a cake and kicking your legs is a talent, so I'm not really sure what Ben's thinking right now." Ouch.

Meanwhile, the Twitterverse is already abuzz, calling her performance "cringeworthy" (and all sorts of other mean things which I won't repeat.) That's a terrible response.

If you watch Ben's face during the performance, he seems to enjoy it at first, smiling and laughing as Olivia emerges from the (cardboard?) cake in lingerie and a red sequined cape with boa accents. But when Olivia stumbles and can't keep a straight face herself, Ben covers his face in a gesture that might be read as secondhand embarrassment.

But that's what I love about this performance — the fact that Olivia can't keep a straight face, which to me, shows, she doesn't take herself too seriously, and is willing to be a little wild to get a laugh or two.

Fans were quick to throw shade on Olivia early in the season, making her the villain and even accusing her of using the show for fame. (Wow! What a crazy notion!) So, I'm betting people who already don't like Olivia are going to use her strip-tease as another reason to drink the Haterade. I don't really get why a strip-tease in Vegas is so shocking, but whatever. Isn't this supposed to be a steamy dating show?

I mean the ladies are, after all, in Vegas of all places. And you know what happens in Vegas (I mean, do those rules apply when you're on a nationally televised dating show?).... I don't know, and I'm thinking maybe strategic Olivia doesn't either. But regardless, let's hand it to the girl, because she sure knows how to steal the show.

More Like This
What Exactly Are Minions, Anyway ?
Family Of Grandfather Killed In Highland Park Mass Shooting Say He "Saved" Their Lives
Is It Safe To Keep Using Period & Fertility Apps In A Post-Roe America?
Megan Fox Explains Why She Asked Machine Gun Kelly If He Was Breastfed As A Baby