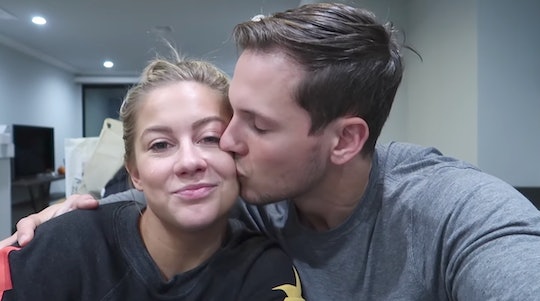 Olympian Shawn Johnson Reveals She Had A Miscarriage In Heartbreaking Video

When 2008 Olympic gold medalist Shawn Johnson East found out she was pregnant, she was ecstatic. She and husband , football player Andrew East ,immediately got down to the familiar business of dreaming, of planning their lives out as parents; she even bought her future baby a pint-sized pair of Converse sneakers to wear when he or she arrived. Sadly, it was not to be. The Olympian lost the baby, and now she is bravely sharing her experience with other parents who might feel alone in their own struggles. Shawn Johnson's heartbreaking video about miscarriage might be tough to watch, but it was also incredibly generous and thoughtful.

The video opens with a message from the couple, who were married in April 2016, letting viewers know that the video might not be easy or fun to watch.

Today's video is a little bit sensitive. It's not the happiest video. But we feel like a lot of people go through this so we wanted to share it.

The video the cuts to a blissful Johnson, weeping and holding up not one but two positive pregnancy tests. Shaking and radiant, whispering, "We're going to have a baby!"

While Johnson admits that her pregnancy "definitely wasn't planning this," she also said, "This is really, really exciting."

For his part, East had a feeling that Johnson might be pregnant, and was quick to share a lovely message for his unborn child:

If you are on the way, I love you. I have no idea who you are, what you are, or what you’ll be like, but I’m pumped to meet you.

He also said in a personal vlog that he truly believed Johnson would make a "great mom."

The couple were clearly incredibly nervous and excited but trying to take it in stride. Perhaps that was the most poignant part of the video... watching this happy couple go through a journey so familiar to many parents. The fear, the joy, that opening of your heart that changes the way you look at everything on the planet.

And then came the terrible news.

Within 48 hours of finding out they were expecting, Johnson and East went for a doctor's visit and discovered she had miscarried the baby. Johnson said in the video when she came home from the visit:

So, it’s been a roller coaster of a few days. We just got back from the doctor and I’m no longer pregnant. Somehow, I lost the pregnancy already. It sucks. It’s definitely no fun, guys … and having a doctor confirm that we miscarried doesn’t feel good. I’ve cried enough today, I don’t need to cry anymore.

According to Medical Daily, 10 to 25 percent of all recognized pregnancies end in miscarriage. Regardless of how common it might be, it is a highly personal and deeply painful experience. It's not just the loss of a child, it's the loss of a life you thought you were going to experience. As Johnson noted in the video when she held up the tiny Converse shoes and said softly, "We will use these again, of course."

She also pointed out that she was "ready to buy baby clothes."

Miscarriage is heartbreaking. It's a crippling loss, and even more than that, it can be lonely as hell. Which is why Johnson's video sharing her brief, sweet, sad journey with pregnancy is so important.

Because nobody ever needs to feel alone with such grief. The pain itself is hard enough as it is.