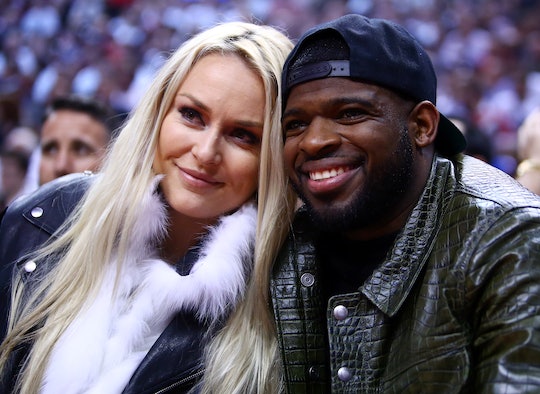 Lindsey Vonn Says "Men Should Get Engagement Rings Too" After Proposal To P.K. Subban

Decked out in matching festive pajamas, Lindsey Vonn announced she proposed to NHL star P.K. Subban on Christmas Day with an adorable photo shared on Instagram. The Olympic skier and her now-fiancé celebrated their two year anniversary on Dec. 25, and Vonn honored the occasion with a romantic gesture because, as she shared on social media, she believes "actions speak louder than words" when it comes to gender equality.

Now it's important to note that the Nashville Predators hockey star had already proposed to Vonn this past August, according to People. At the time, Vonn shared a video of herself with Subban where she admitted he "finally popped the question" and said she couldn't wait to spend the rest of her life with him, but their engagement story did not end there.

On Christmas Day, the couple shared a photo on Instagram of themselves cuddling up in matching PJs with their three dogs to celebrate a new level of their engagement. Vonn proposed to Subban with his own engagement ring because, as she wrote on Instagram, "men should get engagement rings too."

"Merry Christmas and happy holidays everyone!!" Vonn captioned the photo. "On our 2 year anniversary I returned the favor and asked PK to marry me... and he said yes. We talk about equality but actions speak louder than words. Men should get engagement rings too and this is what PK deserves. Can’t wait to marry you babe."

Vonn's social media followers were quick to share their support of Vonn's quid pro quo proposal, complete with engagement ring for her fiancé. As one follower noted, "That's 'true' equality. What a merry & memorable Christmas it will be. Congrats..." Another wrote that "Women can & should propose to men as well."

The retired skier also shared a snapshot of Subban's ring on Twitter with another nod to her "non-traditional" decision to propose to her fiancé. Perhaps unsurprisingly, the ring is pretty spectacular.

Vonn's proposal to Subban with an engagement ring is actually an important reminder that the concept of marriage proposals being the sole domain of men is seriously antiquated. Not only does this idea put undue pressure on men to perform, it also suggests that women cannot be the decision makers when it comes to their future.

Of course, the fact that they were already engaged takes a considerable amount of the pressure off Vonn. But still, I imagine Subban appreciated the gesture. Also that ring.