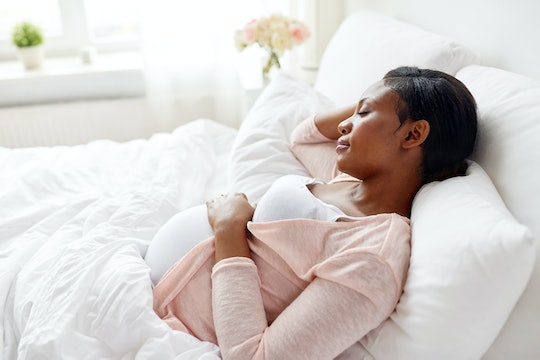 Omega-3s Are Reducing Preterm Risk, According To This New Study

Diet during pregnancy can be a tricky thing to navigate, especially when it comes to fish. There's a lot of conflicting advice out there! But a new study has found that Omega-3s are reducing preterm birth risk and the boost of those fatty acids can be largely credited to cold water fish.

A new paper published in the journal EBioMedicine examined how a mother's diet affects her child's health with a focus on fatty acids. Dr. Sjurdur F. Olsen, a leading researcher on the study, originally published his hypothesis over three decades ago.

Olsen's original work looked at increased birth weight tied to marine fat, as it prolonged gestation. He was inspired by the women of the Faroe Islands, rugged territory located two hundred miles north of Scotland. There, as noted by Wbur, government records showed that women had much lower rates of premature births than the rest of the Kingdom of Denmark. In fact, their rates were among the lowest in the world.

Using his original hypothesis, Olsen's team was able to draw radical results. The study showed that women with EPA+DHA levels of 1.6 percent or less of total plasma fatty acids had a ten times higher risk of early preterm birth when compared with women whose levels were 1.8 percent or higher. Everybody, take note!

The health benefits of Omega-3s have long been debated with research findings sometimes being inconsistent. Recently, the National Institute for Heart Health questioned the claim that Omega-3s reduce risk of heart disease. But, recent studies have pointed to previously unrealized benefits, such as one proposing that Omega-3 supplements may improve kids' behavior. This study, though, shows great promise.

To conduct the study, researchers took data from the Danish National Birth Cohort, a nationwide study that follows 96,000 children in Denmark through questionnaires and registry linkages. As noted by the press release, they examined blood samples from 376 women who gave birth very prematurely (before 34 weeks of gestation) between 1996 and 2003. They also took blood samples from 348 women who had a full-term birth. Each blood sample was taken during their first and second trimesters of pregnancy.

The results of the study highlighted the importance of eating cold-water fish, such as Atlantic mackerel and anchovies.. It can be a little shocking to hear, because most women have repeatedly been told to completely avoid fish throughout pregnancy. As Olsen noted, according to the study's press release:

"At a time when many pregnant women are hearing messages encouraging them to avoid intake of fish altogether due to mercury content, our results support the importance of ensuring adequate intake of long chain omega-3 fatty acids in pregnancy. Consumers should consult the guidance issued last year by the U.S. Food and Drug Administration and Environmental Protection Agency to make informed choices about the best types of fish to consume and avoid in pregnancy."

Last year, the FDA and EPA issued advice for women who are either pregnant, plan to become pregnant, or breastfeeding. In a handy chart, the agencies outlined safe fish choices such as catfish, flounder, and anchovies, while highlighting foods like shark and marlin. It's important to note that the cause of concern are the mercury levels in the fish. So, what women in Denmark are able to eat may differ from women in the United States, whose fish are coming from different sources.

The geographical limits of the study are noted by the researchers themselves, who admit that more tests need to be done. Denmark's pre-term births are already low, so research needs to be repeated in different populations.

The information still looks promising, though. And for the women who have missed having fish as a part of their diet, it's probably a blessing.