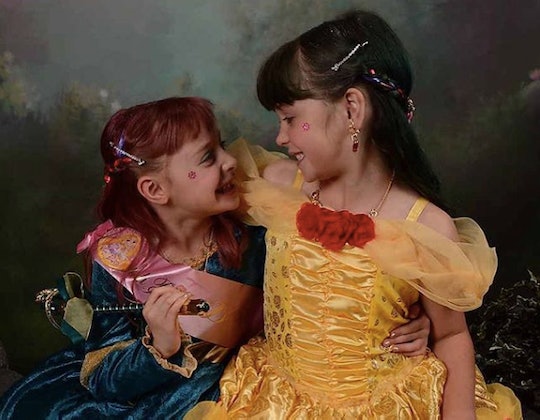 We Met Her For A Couple Of Minutes. She Changed My Life.

My 8-year-old daughter Freyja was born with a severe disability. She has a very rare neurological condition that doctors and researchers are still learning about. The one thing we know for sure: it is a terminal diagnosis. The past year was a hard one for Freyja’s health, which was tough on all of us. I felt a lot of anger and sadness. Worse, I felt self-pity. Why her? Why us? When will it get better? And what if it doesn’t? This made me feel very Other, and I walked around like Eeyore, bitter and isolating myself from my friends and family, acting like someone was raining on my parade every single day. In the midst of this, we went to Walt Disney World for Freyja’s Make-A-Wish trip. I did not expect it to be the most meaningful experience we’d ever had as a family, but for so many reasons it was.

Disney does that for a lot of people. People go there to make memories. We saw many other buttons and t-shirts from wish-granting organizations on families like ours, there to make the most of a child’s potentially short life, to prepare for the one thing that no one should ever have to prepare for. We saw people celebrating weddings and engagements, birthdays, anniversaries. We saw families and friends and couples there on the vacation of a lifetime. It was wonderful to look around at everyone there for their own reasons but all together having this collective experience at the same time. The dark cloud over my head began to dissipate. I found myself connecting with people, smiling more, realizing that I was not alone, that lots of people have challenges in their lives. I started to let other people in again. While we were there, many, many people talked to my daughters and my daughters talked to many, many people. Random strangers from all over the world were friendly, chatty, complimentary. From a passing hey, I love the lights on your wheelchair to a more involved conversation, our interactions with other Disney-goers made for great stories about great people we will never forget.

Like Jen. When we met Jen, we’d just come off the It’s A Small World ride at Magic Kingdom and decided it was time for some food. My daughter Freyja, whose blonde hair was dyed bright pink to match her wheelchair, spotted Jen as we tried to find a spot to sit at a very crowded restaurant. Jen was wearing a pink wig and she was dressed as a mermaid. She was also using a wheelchair. She and Freyja were deep in conversation when I found them, bonding over their pink hair and wheelchairs. I heard Freyja ask her if she was a real mermaid. When Jen’s food was ready, she blew Freyja a kiss and was gone. We kept an eye out for Jen over the next few days, but we never saw her again.

Freyja’s health declined and I admit that I kind of forgot about the package and about Jen, until I started seeing photos of her on social media looking quite ill.

Shortly after our return home, I wrote an article about accessibility at Disney for Romper. A few days after it went live, I got a message from a woman whose name I did not recognize:

While at Disney a couple weeks ago, I was waiting for an order of hot dogs for my family when I felt my hair being touched. I was wearing my pink wig at the time. I turned to see a little girl with pink hair, sitting in a wheelchair. We started talking and I asked her what her name was. She was wearing a Make-A-Wish button. I asked why she was in a wheelchair, and she asked the same of me. This was my favorite memory of Disney World, as I told my family many times. I just saw your article about Disney — and about the little girl that I met who melted my heart. Thank you for allowing me to meet your daughter. She may not remember me. But I will forever remember her.

I wrote back right away saying that we absolutely remembered her, and she replied:

It’s just such a small world. Freyja really made an impact on me.

Over the next few months, Jen reached out from time to time. She bought raffle tickets for Freyja’s school fundraiser. She asked me if it was OK that she put together a package not only for Freyja, but for my other daughter Thora, too. “Can’t leave her out!” she wrote.

But as the year went on, Freyja’s health declined and I admit that I kind of forgot about the package and about Jen, until I started seeing photos of her on social media looking quite ill. She always had a smile on her face and her determined attitude shone through, but her posts were increasingly serious. Waiting for treatment, one said. Guess where I am again? said another. There was a video of her shaving her head. Think I’ll look good bald? the caption said. I looked at her profile more closely. She lived 1,300 miles away from us in the middle of nowhere, living a life I knew absolutely nothing about, battling spinal cord cancer. But she had reached out to me, to ask about my children. I began to follow her updates. From her check-ins, I could tell she had to travel hundreds of miles for her health care. But enthusiastic fundraisers and brightly colored matching t-shirts were soon replaced by talk of radiation, which was followed by invitations to her Celebration of Life party. Shortly after that, one final road trip north to hospice. Then, pain medication. In every photo, she was surrounded with flowers and cards and people hugging her, playing cards with her, bringing her gifts, sharing meals. And always, she was smiling.

I wasn’t sure Freyja would remember her, but I was wrong: 'The mermaid in the wheelchair?' she asked.

Soon Jen’s mother took over her profile. Jen’s hands had stopped working, she explained in a post. Then, a note appeared saying visitors were now limited to immediate family because Jen was sleeping most of the time, no longer aware of who was or wasn’t with her. When I saw a post saying that Jen was at peace and coming very close to her transition, I commented, offering my best wishes and explaining who I was and how we’d met her daughter. Jen’s mother responded right away.

Aimee, I will be sending the girls a box from Jennifer. She had people who attended her Celebration of Life parties color pictures for them as well. Her wish that I follow through with this was among the last conversations we had.

Tears welled up in my eyes as I read this. This woman’s life was nearing its end, and she was thinking of my daughters? Two children she spoke to for five minutes seven months earlier and then never saw again?

I told her the gesture had left me speechless. I thanked her for telling me.

That evening I talked to my daughter about Jen. I wasn’t sure Freyja would remember her, but I was wrong: “The mermaid in the wheelchair?” she asked.

She knew exactly who I was talking about.

The next day, Jen passed away. The note of condolence I sent to her mother was just one among hundreds. There was no service, the obituary clarified, because Jen wanted people to remember her as she was at her Celebration of Life, “with a smile on her face.” We’ll probably never meet her mother, her son, or any of the other people who loved her. And we only met Jen herself for a few minutes, but her tenacity, her determination, her insistence on enjoying her life, was infectious.

My daughter will always remember the pink-haired mermaid in the wheelchair, but I will always remember the person who brought me out of the doldrums and taught me that each of us is the master of our own reality. Jen believed that joy can be found anywhere you looked — even in the most random of encounters, and now I believe it, too. She taught me that it really is just such a small world.