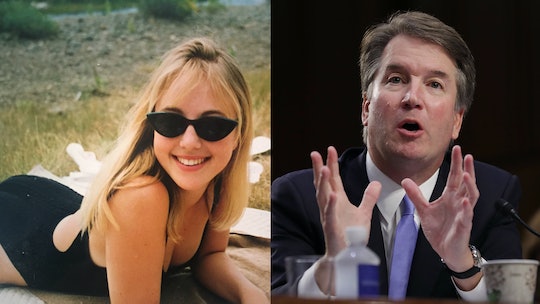 “It’s disturbing that these uncorroborated allegations from more than 35 years ago, during high school, would surface on the eve of a committee vote after Democrats sat on them since July.” —Statement from the Senate Judiciary Committee regarding sexual assault allegations against Judge Brett Kavanaugh.

“I categorically and unequivocally deny this allegation. I did not do this back in high school or at any time.” —Kavanaugh’s statement following the initial New Yorker story detailing the alleged assault.

"If that was true, I think it would be hard for senators to not consider who the judge is today. That’s the issue. Is this judge a really good man?" —Senator Orrin Hatch (R-UT), on allegations that the Supreme Court nominee attempted rape as a 17-year-old.

“Back in high school.”

"Who the judge is today."

As soon as we learned the name of the woman who has accused Supreme Court nominee Brett M. Kavanaugh of sexual assault when they were both high school students, the outcry began: the campaign of attempting to place these accusations so far in the past that they don’t matter. As if the fact that the alleged assault took place “back in high school” somehow makes it un-serious. Understandable. Forgivable. Irrelevant.

I’m a decade younger than Professor Christine Blasey Ford, who came forward this weekend as the person behind the letter to Diane Feinstein, but my memories of high school are still a good way back. These are old memories, and yet, due to the nature of adolescence — the feeling that everything in our lives was coming to a head, that everything happening to us was so weighted and meaningful — they are some of the most vivid memories we have. Yes, tangential details have eroded over the years, but the core, heart-thumping moments that took us to the edge of something new and exciting, or terrifying and dangerous, haven't changed.

I read Professor Ford’s recollection of what she says Kavanaugh did to her one summer in the early 1980s, and the surviving details ring true to the way my own memories work. As she recounted to The Washington Post, she remembers the (alleged) sexual assault — being corralled into a bedroom and pinned down by Kavanaugh as he attempted to remove her clothing and the bathing suit she wore beneath, his hand over her mouth and the deliberately loud music suffocating her cries — but forgets some of the surrounding details of that day: how she got to the party, whose house it was, exactly what month it occurred.

Isn’t that how it is for all of us? I can’t remember my own landline at 16, but I can easily conjure up the moments from high school that imprinted themselves on my psyche, good and bad. I clearly recall being around 16 years old, at a party one summer night when the older kids were back from college. I remember kissing a boy I’d long had a crush on from afar, a boy who had graduated a couple of years before. I remember we were on someone’s deck, the warm California night air, the scent of bay leaves and dry grass enveloping us; I remember the sounds of the party floating out from inside the house; I remember his name and where he was going to college. I vividly recall the softness of his flannel shirt, the way he tasted like mint Bailey’s, and the fact that I knew he was lying when he said he’d always noticed me before. I remember being flattered anyway, and liking the kiss even as my stomach flipped. I also remember feeling mostly relieved when the night ended and I never saw him again — it was just enough, anything more would have been overwhelming. I do not, however, have any idea, all these years later, whose party it was, how I got there, how much I’d been drinking, or how I got home.

This isn’t a bad memory at all; it must be stuck in my mind because it felt so significant in the moment, one of my first kisses, at a time when I was growing to understand what it might mean to be a woman and not a little girl. It’s burned into my brain because it mattered, and it still matters all these years later — it’s a little piece of who I am.

All of my memories from those years are like that… some are lovely and some are mortifying (freshman year: I forget whose party but I remember the linoleum I stood on; I remember the boy to whom I confessed my love and the horribly kind look on his face that makes me cringe to this day). I know I’m “lucky” that none of my high school memories are of anyone brutalizing me, pressuring me, hurting me, or stealing my sense of safety away permanently. I have other memories, from further ago and closer since, equally crystalized, equally concrete, which allow me to take my uncomfortable place in #MeToo company and which will never fade as the years go by. But this isn't that essay — the essay where I turn out my most painful places and sift through the unfair, unearned shame and confusion, hold it up to the light for all to see. I don't need to tell you that we can remember the traumatic things, no matter how long ago they happened.

Who we were then and what we did and what happened to us is a part of who we are now.

The point is this: it matters what happened to us in high school. It matters what we did when we were 15, 16, 17… it mattered at the time and it matters years later. Who we were then and what we did and what happened to us is a part of who we are now. What happened to Professor Ford when she was a teenage girl matters, and what happens to my 15-year-old daughter, now a sophomore in high school, matters. It matters so much it makes me sick with fear when I imagine her accepting a ride home from the wrong person, or drinking from the wrong red Solo cup at a party one day — maybe today, maybe this weekend, maybe, please God, never.

Professor Ford at first chose to remain anonymous, a choice that is so easy to understand. But, as The Washington Post reported, her anonymity began to feel less and less secured, and she ultimately decided to come forward. Now there’s a face to the allegations, a face for the court of public opinion to try, and to find wanting. Not only because it's "her word against his" (how many times can we hear that phrase before vomiting on cue?), but because the alleged attempted rape took place years ago.

"I thought he might inadvertently kill me," Professor Ford wrote in the letter she initially sent to Senator Diane Feinstein.

"He was trying to attack me and remove my clothing.”

Can we hold him accountable in 30 years for a ruling he makes next year?

Don’t tell me that it happened too long ago to matter. Don’t tell me that what happens to my daughter today won’t matter to her in 10, 20, 30 years. Because it's exactly the opposite that is true: the years my daughter is living now will shape her for better, or for worse. What we experience as teenage girls is formative and important. It cannot be dismissed. Every thing that happens to her in these precious, meaningful, fraught years will become a part of her story; a part of the way she navigates life, relationships, the world; a fundamental part of who she is.

This allegation is a reminder that everything is at stake for my daughter; for every teenage girl in America.

And don’t tell me that what a boy did when he was 17 is somehow so incredibly far removed from who he is at 52. There's a reason so many of the women who initially signed a letter in support of Kavanaugh's character have suddenly gone silent now that his accuser has come forward.

"I was raped 30 years ago — by a friend of a friend. I never told anyone. If he was the Supreme Court nominee, I would hope to be as brave as this woman. Just because it happened a while ago does not mean it didn’t happen." —Facebook post on Monday by a friend of mine I won't name here.

Being able to face, let alone stand up to, your treatment as a young girl can take time, can take longer than any statute of limitations. In many cases, standing up to your abuser can take the better part of a lifetime, if not a lifetime. And handing out a lifetime appointment to defend the rights of every American to someone whose own history allegedly began with such crystal clear disregard for this girl’s body, her autonomy — that isn’t nothing. Handing over the responsibility to parse the constitutional intent of a 200-year-old document to a man we are being told cannot be held accountable for his behavior 30-plus years ago is the height of ludicrousness. Can we hold him accountable in 30 years for a ruling he makes next year?

This allegation is a reminder that everything is at stake for my daughter; for every teenage girl in America. It’s a reminder that a culture that doesn’t take assault seriously is a culture that condones the mistreatment of women, even as it threatens to curtail the access to the reproductive health care and the choices we need to be healthy, whole citizens. Those are the competing ideas that will come from the testimony of Kavanaugh and Ford in front of Congress on Monday. It is all related.

This is what Brock Turner’s rape victim told us. This is what Larry Nassar’s accusers told him — and us — in the courtroom when they faced the man who shaped so much of their lives with his betrayal and abuse. "Perhaps you have figured it out by now, but little girls don't stay little forever,” Kyle Steven told the man who violated her for six years. “They grow into strong women that return to destroy your world."

I believe Professor Ford. I believe her because I remember exactly what it was like to be 15. I know how memories work. And because I am a woman in this world, I understand why it would take her years and years to even be able to tell anyone about what she says happened to her, still longer to talk about it with her therapist, and what it must mean to her to be out in the open, so bravely standing against the shitstorm that is headed her way. I believe her, and I believe what happened all those years ago matters because what happens to our girls today — the message we are sending every teenager in America when we dismiss something like this — matters.

Judges are taught that no act is punishable unless the mind is guilty; their business is sifting the evidence for intent. When we as adults look back on our own histories, we can know in our hearts that what happened that summer in 1981 isn’t the bumbling exploration of two children in a chrysalis, it’s a defining action of those lives that followed. And the intent has never mattered more.