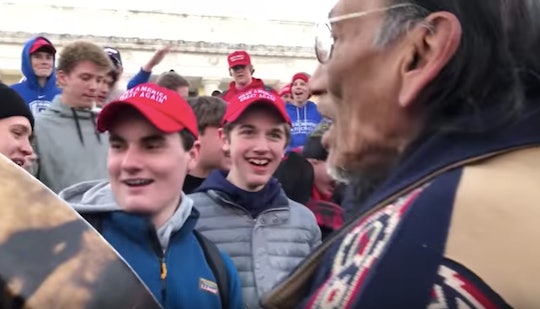 My Biggest Fear As An Indigenous Mother Is Your Complacency

Saturday night, as I watched the videos of a mob of white male teenagers appear to verbally and physically intimidate a Native elder who had been participating in the Indigenous People’s March, I was filled with so much disgust and anger I could barely process it all. Sadly, situations like this are not uncommon. Living in the D.C. Metro area, I have the unfortunate opportunity of dealing with busloads of MAGA hat-wearing tour groups on a regular basis. Only a few weeks ago, outside the reception for our two new (and first ever) Native American Congresswoman, a large family (adults and children) with their MAGA hats stood mocking all the Indigenous people in their native regalia entering the event. They laughed loud enough for us to hear, pointing and clapping their hands over their mouths, but since we were there for our people’s victory, we paid them no attention. As parents, we know that every exchange we have with our children shapes the way they interact with the people and world around them, and the reality of situations like this boils down to one thing: White parents who are not actively teaching their children to fight racism are producing racists.

Before I continue, I would like to address the fact that multiple videos and stories about what occurred Saturday at the Lincoln Memorial have surfaced, and in my view, not a single one changes the original narrative. To me, all of the conversation since then simply supports the reality that white parents will, in attempting to protect their children, shield them from any responsibility or consequences of their actions, based on the premise that their child's “potential” is worth more than the lives of those around them.

Kids like this “should” know better, of course. In the case of the Covington Catholic High School group, well, they go to a school that teaches family values and Biblical principles, right?

Let’s address the obvious. It is very apparent to me that the young white men and main aggressors in this particular situation have been surrounded by authority figures who have nurtured a culture of entitlement and hatred. The confidence with which this young man blocks and intimidates an elder (and United States veteran) is so steadfast, it is clear that his aggression stems from a deep-seated belief in his “right” to behave that way, a belief that can only have been reinforced by those around him all his life. (After all, we know that they proudly wore hats symbolizing our racist president’s agenda, and they were in town specifically to protest against a woman’s right to make decisions about her own body.) And his mother took the very first opportunity she could to point fingers at a separate group of individuals in order to overshadow the victimized Native man and create a new narrative of unfairness towards her child, in turn erasing the fact that he mocked and physically prevented the elderly man from moving.

“Now what does this have to do with me?” you might ask, because you were just as appalled as the next person by this video, right? The answer is: EVERYTHING.

Take a look at this “well meaning” Amazon review on a children's book that teaches kids about the many shades of skin color.

This mother actually states that her own child, at the age of 6, decided for herself that she preferred people who look like her. Instead of having addressed the issue at an early age, this mother is left trying to correct a bias that her child had formed on her own. This is in no way me shaming her — she is clearly trying to remedy the issue the best way that she can, but by having shielded her child from the living, breathing monster that is racism, she was perpetuating and feeding it.

Your complacency in not teaching your children about racism and how to actively fight it is my biggest fear as an Indigenous mother.

Thinking you’re an ally when you are actively omitting the truths about racism to your children is one of the most dangerous and counterproductive things you can do. I don't care if you voted for Obama; I don't care that you bought your son a “Feminist” onesie, or that you share the “wokest” articles on Facebook and knitted a pink pussy hat for the Women’s March, if you are not actively teaching your children about racism and actively teaching them how to fight it, you are not doing enough. Awareness without action is acceptance. PERIOD.

“I must confess that over the past few years I have been gravely disappointed with the white moderate. I have almost reached the regrettable conclusion that the Negro's great stumbling block in his stride toward freedom is not the White Citizen's Counciler or the Ku Klux Klanner, but the white moderate, who is more devoted to 'order' than to justice; who prefers a negative peace which is the absence of tension to a positive peace which is the presence of justice…"

Did you share the video with your children this weekend? Did you talk about it? Did you tell them to stand up and speak out against hate? These are some small things you can do to become a real ally, and make an actual difference.

The gray space between a proud racist and someone on “the right side of history” is where the real work needs to be done.

I live in the D.C. Metro area and ever since the sh*tshow that is this presidency started, giving the green light to racist behavior, our local community has been turned upside down. The synagogues of Jewish friends have been covered in swastikas, nooses have been found hanging on federal property, and white nationalists have proudly marched down the streets of our nation's capital (with police protection). You may believe that you are not a racist, but your complacency in not teaching your children about racism and how to actively fight it is my biggest fear as an Indigenous mother. Shielding your children from the truth makes them a part of the problem. Let me say that one more time: Shielding your children from the truth about racism is a conscious decision to make them a part of the problem.

The gray space between a proud racist and someone on “the right side of history” is where the real work needs to be done. I have had so many instances of well meaning friends commenting on my ethnicity and culture, either trying to find a commonality between us using their whatever percentage of Indian princess blood, or congratulating my daughter and me for looking so “exotic,” or dressing their children as an “Indian” for Thanksgiving, Halloween, or some school event. Your 23andme results are not a conversation I want to have with you. Most of these microaggressions have come from friends that not only have the same political views as me, but would 100 percent consider themselves allys.

“We are uniting the Indigenous peoples across the world to stand together to bring awareness to the injustices affecting Indigenous men, women, children, and Two Spirits," states the official mission statement of The Indigenous Peoples March. "Indigenous people from North, Central and South America, Oceania, Asia, Africa and the Caribbean are a target of genocide. Currently, many Indigenous people are victims of voter suppression, divided families by walls and borders, an environmental holocaust, sex and human trafficking, and police/military brutality with little or no resources and awareness of this injustice.”

The March was created as a vital tool for bringing peaceful awareness into the streets of our Capital. The march happened right in my own backyard, my community. My daughter will be starting kindergarten this upcoming school year and my biggest fear is that your child will be that young man — and if not him exactly, then one of the many kids in the crowd, standing by, doing nothing. I see his mocking stare and aggressive posture and I fear for her. I can see her at school, or on a first date, or just walking down the street and I wonder when that first encounter will happen. Not if, but when.

If being a racist is a taught behavior, then not being a racist is a taught behavior as well. There is no default mode on prejudice. We teach our children to not run into the street, or touch a hot stove, or run with scissors, but we also need to teach them that every person deserves our respect and that we must always stand up for anyone being bullied or mistreated. Raising children to not be racist will take constant effort and reinforcement. I encourage you to ponder these words and do your part. The number one tool we have as parents is using conversation to express truth. Talk to your children about current events, ask them how it makes them feel, correct the false history that they are being taught and do not shield them from the truths of slavery, Columbus Day, the Civil Rights movement, Japanese internment camps, the reality of Thanksgiving, etc., etc., etc. Teach them to have empathy.

Our children really can change the world: it's just going to take a hell of a lot more effort to fight the ugliness out there.