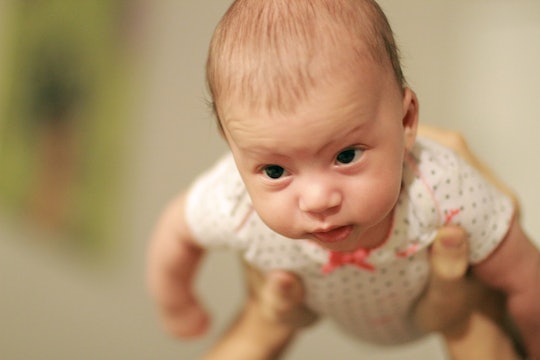 Matt Coyne, the comedic dad whose post on first-time fatherhood went viral in December, has done it again. Coyne recently returned from a vacation to Cyprus with his wife and his six-month-old son, Charlie. Along the way, he learned several lessons about traveling with a baby and summed them all up in a Facebook post. Whether you've traveled with a tot or just enjoy the occasional dose of profanity-laced comedy, you'll be able to appreciate Coyne's hilarious baby vacation story.

Coyne's first dad-related post included truthisms such as "Labour is like magic.. but only in that its best when you don't know how it's done," and "Trying to walk round a supermarket takes ages because old women reeeally like babies and lock onto a pram [stroller] with the dead-eyed tenacity of a predator drone." (Relatable? Yes. Hilarious? Definitely.)

This time, Coyne's taken on travel. With a new baby in tow, there's a first time for all sorts of new predicaments — including plane rides, dealing with sunscreen, and (as Chrissy Teigen could have warned Coyne) facing judgment from friends and strangers. Coyne, who writes the blog Man vs. Baby, got to know the issues that arise intimately, then shared his lessons with friends and followers online, who have now shared his post more than 15,000 times. (He's also had about 10,000 comments left on the post — no big deal.) Here's just a few of the takeaways from the Coyne family getaway.

One or two people were a bit judgey about the idea of taking a 6-month old away. "So, you're taking him on holiday?" Yeah. "Abroad?" Yeah. "Somewhere hot??" Yeah. "On an aeroplane??" ...By which point I was tempted to answer: "No, me and Lyns will be going on the plane, but we thought we'd get Charlie there by driving him to Dover and firing him out of a f*cking cannon". What I actually said was: "It'll be fine". And you know what? It was.

One of our worries about the flight was that we'd get seated next to someone unhappy about being near a baby.. We got sat next to a woman who had a face like a cats arse being burned at the stake.. ... Some people have a problem with babies, whether they're sat next to them in a restaurant or on a flight.. These people are what my dear old nan used to call 'arseholes'. (Also, I suspect that if the woman in question had greeted us with a smile, rather than a roll of her eyes, we'd have been more inclined to tell her that she'd come back from the toilet with her skirt stuck in her tights, and was showing everyone her arse).

Don't take an expensive pram [stroller] on a flight.. The moment you check-in and that pushchair disappears behind that rubber curtain it is collected by two WWF wrestlers who smash it against a wall for half an hour.. before it is transferred to the runway, where they reverse the plane over it a couple of times before placing it in the hold. At your destination.. for some bizarre reason you have to collect whatever is left of your pram (a wheel) from a baggage carousel that's f*cking miles away.. (I'm sure our stroller ended up closer to the airport we'd just left).

When airlines say they have 'baby changing facilities' what they actually mean is: 'a shelf'. Changing a baby in a plane toilet is like the hardest round on 'The Cube'. Basically ..imagine trying to carve a turkey in a phone-box.. now half the size of the f*cking phone box, and arrange for an incontinent d*ckhead to bang on the door every five seconds.

If your baby will sit quietly during the flight that's great, if they will sleep.. even better. If like Charlie, your little one likes to 'stand' up all the time.. You can look forward to, what feels like a midget river-dancing on your bollocks for the next four hours.

Those problems, however — along with all the other surprises that come with traveling with a baby — didn't matter in the end, wrote Coyne. "What I would say to anyone considering taking their baby on holiday is this: ..Go," he wrote. "I will always remember Charlie's face as he curled his toes in the sand for the first time. ..His delight at being pushed around a hotel pool on the back of an inflatable crocodile. ..And, his fascination as we sat on a bench, hand-feeding a sparrow some crisps, overlooking the deep blue of the mediterranean sea."

Sounds like it was worth it to me — not only did Coyne get a fantastic vacation with his son, but he got a bit of viral fame out of it, too. If you're hesitant about taking that trip with your baby, take heart. If you look at it through the eyes of Matt Coyne, even those pesky moments will seem humorous to you.