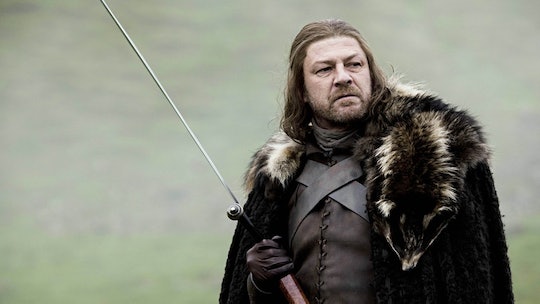 The only thing that’s certain the the world of Game of Thrones is death and dragons. And gratuitous nudity. But according to one theory gaining some traction, one big character’s death might not have been so final. It’s not a brand new theory, but lately, this Game of Thrones fan theory believes Ned Stark is still alive and as a fan of the few good guys left on the show, I am shook. It wouldn't be the first time a character who was thought to be dead came back from the grave, so to speak.

There was the Hound, after all, who was left by Arya to die on a mountainside but returned seasons later with a new lease on life. There was also Beric Dondarrion who popped up long after most TV watcher fans forgot about him. And of course there’s the curious case of Jon Snow. Although to be fair, in all of those cases, no one saw them get decapitated in front of dozens of other characters in King’s Landing.

But the theory that Ned is still alive on Game of Thrones has evolved from one of the first times a fan posted about it on an online forum. The original fan theory posted on A Forum of Ice and Fire said that Varys could have swapped out Ned for someone else with the help of the Faceless Men, specifically Jaqen H'ghar, in order to make it appear that Ned had been executed and to ensure his safety.

The theory states that Syrio could have also been a Faceless Man, being that he was from Braavos, where they're from. And Varys could have found him severely wounded in the Red Keep and convinced him to wear Ned's face at the execution since he was going to die anyway. Or Jaqen, who was first shown being moved from the Red Keep during Season 1, could have been there at the time of Ned's execution and worn Ned's face to take his place at the execution and fool literally everybody there.

The reason Varys would have had to do arrange this and smuggle Ned out would be the foresight to see that Ned’s family would eventually come into power, as we’ve seen Jon and Sansa do as the rulers of the North. But, as with any big Game of Thrones fan theory, there are some holes.

If Varys was going to replace Ned on the chopping block for an impersonator, that person would have had to look just like him and there’s no way that Sansa or Arya wouldn't realize the switcheroo. I’m not inclined to totally dismiss this theory, though, if only because it would mean that the beloved Stark patriarch could return in the show’s final season in some capacity.

The Mercury News wrote that another idea that piggybacks off the Ned is still alive theory is that he warged into someone or something else while he was being executed at the end of Season 1. If you recall, he’s shown muttering something under his breath right before Ser Ilyn Payne brings down the sword of Joffrey’s justice.

It’s long been debated what Ned was saying during his final moments alive, but he could have been sending himself into the body of another person or an animal, much like his own son Bran has been doing for years. It’s not totally out of the question, especially since they’re related. The warging gene, so to speak, could have also been in Ned’s blood. And while his body was executed, he might still live on in someone or something else.

Sean Bean, who played Ned in Season 1, has said that he wasn't asked to return to Game of Thrones for Season 8 or to reprise his role in any capacity. But that could be because Ned is still alive in another form. It might be reaching to hope for that at this point in the series, but this is also Game of Thrones we’re talking about. You’ve got 14-year-old girls swapping faces to slit throats and fire-breathing dragons during into ice dragons. Nothing is really impossible.

It’s also possible that Ned will return to the final season of Game of Thrones as a wight. With winter having arrived in King’s Landing at the end of Season 7 and the Night King making his way through Westeros with his army, dead characters could begin to rise as wights. Ned might be more like a mangled skeleton version of the wights now, but he could still return in that way to mess with Jon’s mind as the great war rages on.

Since dead characters have come back to life on Game of Thrones before, it's not inconceivable to think that Ned could still be alive, come Season 8. But with just six episodes left to tell the rest of the story, there might be too much going on to bring him back from the dead. No matter how much fans still miss him.