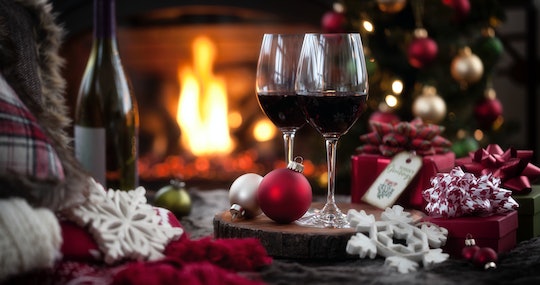 Once again, the far-right Christian group One Million Moms has lashed out at the Hallmark Channel. This time, they're complaining about the network including LBGTQ+ storylines in Christmas movies and "pushing the gay agenda."

Earlier this month, the Hallmark Channel announced its much-anticipated Christmas movie lineup for the 2020 holiday season. This year, the annual "Countdown to Christmas" and "Miracles of Christmas" lineups include a total of 40 new movies, according to People, some of those upcoming movies will feature LGBTQ+ love stories and characters, as CNN reported.

"Diversity and inclusion is a top priority for us, and we look forward to making some exciting programming announcements in the coming months, including announcements about projects featuring LGBTQ storylines, characters, and actors," a Hallmark Channel spokesperson told Entertainment Weekly in a statement. "We are committed to creating a Hallmark experience where everyone feels welcome."

While it remains unclear which movies will feature LGBTQ+ characters, One Million Moms was quick to complain. The group, which is a division of the American Family Association and is known for boycotting TV shows and movies that promote anything outside the realm of what it considers Christian values, started a petition on July 16 calling on people to boycott the Hallmark Channel.

"So many people feel betrayed by Hallmark over these past seven months," the petition reads. "Hallmark Channel was one of the remaining channels that families could watch without being bombarded by politically correct commercials and the LGBTQ agenda... Family entertainment is not the outlet in which to be politically correct by forcing tolerance and acceptance of homosexuality."

In a statement to Romper regarding the petition, a spokesperson for Hallmark's parent company, Crown Media, said: “A priority for Hallmark Channel is to develop a broad mix of content, characters and stories in order to create a Hallmark experience where everyone feels welcome.”

This isn't the first time One Million Moms has targeted the Hallmark Channel over LGBTQ+ inclusion. In December 2019, as The New York Times, the group complained to the network about commercials for Zola that featured same-sex weddings and two brides kissing. The Hallmark Channel initially pulled the ads following One Million Moms' complaints and the network was then met with heavy criticism from the public. After massive backlash, Hallmark ultimately apologized for pulling the ads, according to The Hollywood Reporter.

The reality is that when One Million Moms — a group that is not, in fact, comprised of 1 million moms, as its name suggests — say that "family entertainment is not the outlet in which to be politically correct by forcing tolerance and acceptance of homosexuality," they are only talking about one kind of family. That mindset does not acknowledge that kids need to see all different sort of family structures represented in the media. In a 2017 article, Psychology Today stressed the importance of LGBTQ+ representation in family programming: "When people are able to see something represented, they are better able to understand and grasp who those people are, and this creates an important shift in the social consciousness to include people from a range of different backgrounds."

Following the backlash in December, Hallmark announced it would be working with the LGBTQ+ advocacy nonprofit GLAAD to ensure LGBTQ+ characters are represented honestly in its programming. At the time, GLAAD President and CEO Sarah Kate Ellis said in a statement that the Hallmark Channel’s "decision to correct its mistake sends an important message to LGBTQ people and represents a major loss for fringe organizations, like One Million Moms, whose sole purpose is to hurt families like mine."

"LGBTQ people are, and will continue to be, a part of advertisements and family programming and that will never change," Ellis said. "GLAAD exists to hold brands like The Hallmark Channel accountable when they make discriminatory decisions and to proactively ensure families of all kinds are represented in fair and accurate ways.”

Editor's Note: This article has been updated to include a statement from Crown Media.