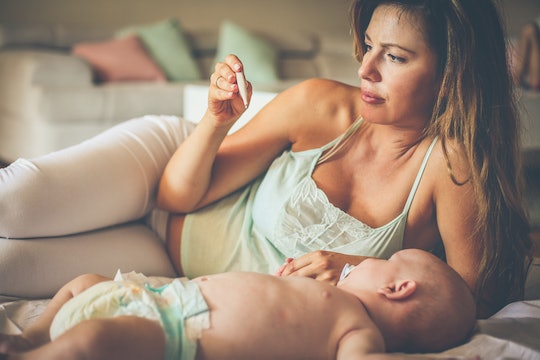 Flu season is around the corner, which means every parent is on guard, waiting for the first sign of a sniffle or a cough. But those aren't the only symptoms adults need to be aware of: One mom is warning parents to also watch out for this one change in their baby's breathing because it could save their lives.

Last week, Charlie O'Brien, a presenter and podcaster based just outside of London, uploaded to her Facebook page a clip she filmed last year that shows her daughter Luna, who was 4 weeks old at the time, breathing abnormally, The Bump reported. In the short video, you can see Luna sucking in at her ribs rapidly, which turned out to be a sign of bronchiolitis, a common lung infection among infants and young children. The illness, which is dominant during the winter months, causes congestion and inflammation in the lung's small airways, known as the bronchioles, according to the Mayo Clinic.

"I was watching her sleep next to me and realised it didn’t look right. I unbuttoned her babygrow and this is what I saw," O'Brien, who maintains the lifestyle and beauty blog, Real Girl Ramblings, wrote in her Facebook post. "Sucking in at ribs is a sign to get your baby or child to hospital."

O'Brien told Romper that she first noticed that Luna wasn't feeling well during a newborn photoshoot. She brought Luna to the emergency room to check for bronchiolitis as her son has had the illness before. But she was discharged after a few hours without treatment because her health improved, O'Brien said.

But two days later, Luna had "a very quiet" day, which O'Brien told Romper she thought meant they were "due some rest as she was usually a very vocal baby." She continued:

I then noticed that her breathing wasn't quite right and unbuttoned her baby grow. Her ribs were sucking in further than normal which is called recession, her breathing was quite fast and her nostrils were flaring. I now know these are all serious warning signs for respiratory distress.

She called 111 - the U.K.'s National Health Service number for urgent medical concerns — and, as she waited to hear back from a doctor, filmed the video clip that has now gone viral, O'Brien said. She planned to show doctors the clip, if needed, so they could see her symptoms. A physician called back right away, and said that Luna needed be taken to the hospital.

Our case was very lucky compared with some. Luna spent just one night in hospital on oxygen.

The common symptoms of bronchiolitis include runny and stuffy nose, cough, and sometimes a slight fever, according to Kids Health. A child with bronchiolitis may also spend a week or longer wheezing or having trouble breathing.

Rapid and labored breathing, however, is one of the signs and symptoms that indicate immediate medical attention is needed, Kids Health noted. Other serious symptoms include vomiting, audible wheezing sounds, lethargy, refusing to drink, and blue skin — particularly around the lips and fingernails.

Low oxygen levels and respiratory failure are complications of the illness, according to Kids Health. As in Luna's case, children who experience complications from bronchiolitis may need hospitalization.

O'Brien's video has been viewed over 1.4 million times since it was posted on Thursday. She's received more than 3,000 comments and over 25,000 shares. O'Brien told Romper about the response:

Since sharing this post, I've had thousands of comments from parents who almost lost their precious babies. I'm so pleased I shared the clip - if it means just one baby or family is helped.

I remember when my toddler had roseola as an infant, I was so scared because I didn't understand his symptoms at first, and what they could indicate. That's why having parents like O'Brien share their experiences with child illnesses can be so helpful, especially with flu season creeping up. O'Brien's word of caution now allows parents to recognize a symptom that may have flown under the radar otherwise, and that could save their child's life.

More Like This
Does The FDA's Plan To Limit Lead In Baby Food Go Far Enough?
Hey Fellas, 'Ted Lasso' Season 3 Is Coming Soon
14 Recipes For Sick Kids When Everyone's Tired Of Canned Soup & Crackers
OB-GYNs Explain The Connection Between Stress & Miscarriage
What Parents Are Talking About — Delivered Straight To Your Inbox