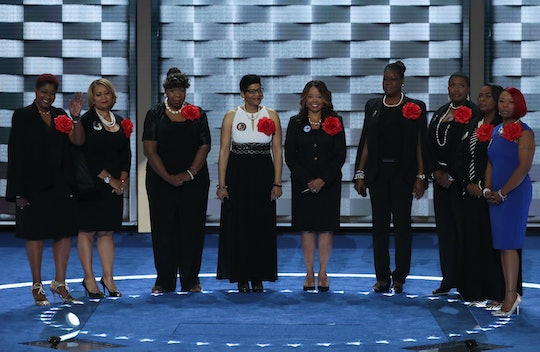 As I watched night two of the Democratic National Convention, I held my 9-month-old baby in my arms while the Mothers of the Movement took the stage. Around the same time, my 16 year old came running up the stairs. She wanted to tell me she was back from a Pokémon hunt with friends and asked what I was watching as she plopped down on my bed beside me.

“Mothers of the Movement on the DNC,” I said, trying not to wake the baby. She told me that she’d heard of them all day — that they’d been everywhere — but that she didn’t know who they were. So I explained how the Mothers of the Movement were there to represent their children, the ones who were victims of gun violence in our country. It’s no surprise to me that my teenager knew exactly who I was talking about. She knew the names: Trayvon Martin. Sandra Bland. Eric Garner. Michael Brown. Hadiya Pendleton. Jordan Davis. Dontre Hamilton. Oscar Grant. We talk about them in our household, in our biracial household, often. We say their names, we analyze the circumstance, we discuss our grief, we mourn openly when another person in the black community dies because of gun violence, and we silently wish for a world in which these realities are not true.

She paused a beat after my explanation, staring up at the ceiling from her pose on my bed. “What would happen if I got shot like that?” she finally asked. I did not hesitate.

“Baby, I would burn this state down to get the people who did that to you.”

My daughter smiled, satisfied by my answer. We talked a bit more before she lost interest and bounced off to her next point of interest.

Both the RNC and DNC have targeted mothers throughout their respective conventions by tapping the wellspring of emotion we feel for our children. Both included speakers who had experienced an event no mother wants to ever know: the loss of a child. At the Republican National Convention, Jamiel Shaw, Sabine Durden, Mary Ann Mendoza, and most notably, Patricia Smith shared their stories. At the DNC, the Mothers of the Movement spoke. I've watched them all and in both cases, the mothers’ grief served as a testament to the love they still have for their late children. However, only the DNC harnessed that grief for something actionable for me, using it to spark activism.

I would stand under lights, on a national stage, on street corners, on Capitol Hill. I would go wherever I could, say whatever I could, to be heard. To say her name. To never stop saying her name.

I set the baby down and thought about my two girls, and also about the rest of my six children: my 19 year old, 17 year old, 16 year old, 13 year old, 3 year old, and my 9-month-old baby. And like has happened so many thousands of times before, a lump formed in my gut and tears welled in my eyes. I thought about one of my children lying on the pavement with the breath choked out of them like Eric Garner, or shot dead like Hadiya Pendleton and countless others.

I couldn’t even entertain the idea of what the six Mothers of the Movement have gone through. I cannot imagine being in their shoes and trying to seek justice for the deaths of my own children. I am in complete, total awe of how those bereaved mothers stood on stage, poised, and channeled their grief into a force of activism that legislators in this country must reckon with. I question if I could ever stand under that weight of much anguish. But, then I think back to my teenager’s question, and to my instant, unflinching answer. I would burn the state down for her. Why? Because I am her mother and I would do whatever I could to avenge her unjust death. I would stand under lights, on a national stage, on street corners, on Capitol Hill. I would go wherever I could, say whatever I could, to be heard. To say her name. To never stop saying her name.

I noticed that the majority of RNC speakers would not even speak the words “Black Lives Matter,” much less the names of the victims of gun violence the movement represents.

As Jordan Davis’s mother Lucia McBath said during her speech at the DNC Tuesday night, “You don’t stop being a mom when your child dies.” That also means that you don’t stop fighting for you child and for others who are trying to protect their children from the same fate. As she said, those mothers — the ones who have lost a child to guns and police violence — want to stop the club from growing.

However, if you watched the RNC last week, you’d be hard pressed to even be aware of the Mothers of the Movement or of their children. As I watched speaker after speaker take the stage, I noticed that the majority of RNC speakers would not even speak the words “Black Lives Matter,” much less the names of the victims of gun violence that the movement represents. It’s this type of erasure that prevents mothers from getting the justice for their children that’s deserved — and in addition to those who spoke at the RNC are hundreds of other mothers, mothers who, like the Mothers of the Movement, are fighting for the very same thing: change. But by bypassing the problem, the RNC essentially overlooked the existence of these women and their losses, of the work we have to do to better our country, and of the important legacies their slain children left behind.

They reminded us that the names of the sons and daughters, fathers and mothers, brothers and sisters, of loved ones we've lost to gun violence in our country must be repeated over and over until change happens.

As a black mother to six biracial children, this realization inflames me. In watching the RNC last week, I felt like the speeches from mothers who lost their children — especially Patricia Smith, whose son Sean Smith was killed in the attack in Benghazi — focused on the speakers' anger toward Hillary Clinton. Smith called for Clinton to be punished. She was obviously seeking justice for her child, but in the form of a call for personal retribution — Smith said, "I blame Hillary Clinton personally for the death of my son. How could she do this to me? How could she do this to any American family?" — rather than policy change. The Mothers of the Movement, however, used their platform at the DNC not to be guided by hatred toward Donald Trump or the Republican party. Instead, they used their platform to ask for change that will bring justice for their children, to turn their deaths and the losses they've suffered into something beneficial for the next generation. As Lucia McBath said,

We’re going to keep telling our children’s stories and urging you to say their names. We’re going to keep building a future where police officers and communities of color work together in mutual respect to keep children, like Jordan, safe. Because the majority of police officers are good people doing a good job. And we’re also going to keep using our voices and our votes to support leaders, like Hillary Clinton, who will help us protect one another so this club of heartbroken mothers stops growing.

And they asked for it by repeating their children's names for all of us, not just black parents. They reminded us that the names of the sons and daughters, fathers and mothers, brothers and sisters, of loved ones we've lost to gun violence in our country must be repeated over and over until change happens.

There is a long history in this country of bereaved mothers prompting change. Emmitt Till’s mother became a symbol for the Civil Rights movement after he was lynched for allegedly whistling at a white woman. Ryan White’s mother helped draw attention to the HIV/AIDS crisis at a time when the world was in denial of its existence. This, after her son died after contracting the disease from a blood transfusion. Matthew Shepard’s mother became an activist for gay rights after her son was brutally beaten to death because of his sexual orientation.

If those mothers and many more can force change on the names of their lost children by speaking up and advocating for change, then so can the Mothers of the Movement. They are standing strong, riding that tsunami of grief and pain, channeling it into activism in an effort to end gun violence in our country. They’re doing it all while living with a grief many of us cannot even begin to understand.

But we can help. We can say the names. Eric Garner. Jordan Davis. Michael Brown. Hadiya Pendleton. Sandra Bland. Dontre Hamilton. Alton Sterling. Philando Castile. And the many, many others we have lost.

Because that’s all it takes to start a movement. A name. And I want to make help the mothers who have lost children to gun violence in their efforts to seek justices and create something positive out of the senseless deaths. By saying their names and speaking the truths of those lost to gun violence, we can do for the Mothers of the Movement what the RNC neglected to do: We can cultivate hope. We can fight for enduring change. We can create a movement.