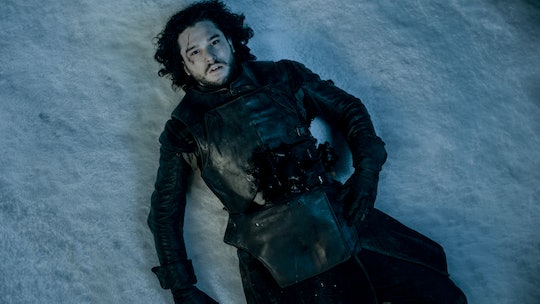 An Open Letter To Jon Snow, Who Needs To Be Told He's Not Actually Dead

As my father used to say when I didn't perform yard work at a speed or level of quality that he deemed appropriate: quit farting around. Seriously, bro, this "Jon Snow Is Dead" nonsense has gone too far. The people who say that? They know nothing. I'm concerned you believe them, which makes sense because you, famously, also know nothing. Damnit, Jon, you are the Commander of the Night's Watch: get it the f**k together.

Though, to be fair, I guess I should give credit where credit is due and clarify my stance. Technically, you are dead. Very dead. You don't have your troops pull a Julius Caesar on you and live. But dude, it's okay. Because this is Game of Thrones. In Westeros, dying is the real world equivalent of getting into your first fender bender: it's going to happen to everyone, but ultimately it probably won't be a big deal. (Unless, cruelly and unjustly, you're Ned Stark, in which case it's a huge deal and you're dead forever and none of us can move on with our lives or love again.) So, the long and the short of it is this: you're dead, but not for long, so try to stop brooding and glowering about it, you gorgeous surly bastard. There are about a million and five reasons you aren't (and can't be) permanently dead. I would like to use this letter as an opportunity to discuss some of the main ones.

Allow me to introduce you to the first reason you aren't going to stay dead: Melisandre.

Melisandre is a priestess for the fire god R'hllor, the Lord of Light, and she has powers. Freaky ones. (Do you remember her demonic shadow baby birth? *massive shudder* I remember her demonic shadow baby birth.) While hers is a popular religion across the sea in Essos (where Daenerys is), there aren't too many acolytes in the Seven Kingdoms, but we have met one other: Thoros of Myr.

This is important. Because Thoros has done something pretty clutch that you, Jon Snow, probably haven't heard about and many show viewers have probably forgotten (because, to be fair, there are approximately 525,600 characters on any given episode, many with very similar names...). Do y'all remember Beric Dondarrion? Your dad, Ned, sent him to arrest The Mountain for raiding the Riverlands back when he was still Hand of the King and had a head. Anywho, Beric died... and then Thoros of Myr brought him back to life.

Then he had this awesome sword fight with the Hound.

So not only is bodily resurrection possible when you have a Red Priest or Priestess in your corner (which you do, since Melisandre conspicuously came charging back to Castle Black right before your men pretended you were a shish kabob), but you can still kick ass and take names after dying. So not a big deal.

Reason number two you're not staying dead: this whole "definitely dying but definitely still being alive" thing has happened to another character, but in the books. We're not talking about forgettable Beric Dondarrion. A big character. We shall call them "Stoneheart." And this big character, to the disdain of book fans, was left out of the show despite their seeming importance to the continuation of the story. Now, showrunners tell us Stoneheart was left out of the show for narrative purposes. But Jon... it was because of you. Because Benioff and Weiss knew they were going to kill you in a cliffhanger only to bring you back, and they know that if people had seen an identical resurrection of another major character, viewers wouldn't be worried about you. I wouldn't have to write this letter. (So it's not a total loss: I like our chats, Jon.)

Reason three that your death is a pause and not a stop: This.

Over and over, it's been said, explicitly, that the battle between the realms of men and the Others is the only battle that really matters and that this war of five kings means nothing. Here's Melisandre saying it...

See? You have been set up over the course of 5 seasons and books to be a major player in fighting the evil armies of darkness and death. It makes zero narrative sense for you to bow out now. Plus we need a point of view character, a major one, up at the Wall to see us through this. Melisandre technically could do it, but she doesn't really have the fan-love or emotional gravitas to pull that off. Sam could, but he's in Oldtown these days. That leaves you, and you alone, to take us on this journey, Jon.

Reason four that you're going to bounce back like a snow zombie, but not evil? You're very likely Azor Ahai, Jon Snow. In case you haven't heard, Azor Ahai is a mythical figure prophesied in the religion of the Lord of Light who's going to save the world from evil, which, as we've discussed, is kind of your whole... thing. Don't get too excited about this one, because it's not a sure bet: Azor Ahai could also return in the form of Daenerys or even Stannis, among others. My money is on Dany, but I'm willing to concede I could be wrong on this one.

Even though we all know that you are the love child of Ned Stark's sister Lyanna and Rhaegar Targaryen, it hasn't been confirmed yet. (Oh, did you not know that? Whoops. Spoilers.) You can't die before that is revealed. Not only would it be frustrating beyond words, it would also just be sloppy storytelling. Even if every fan is wrong and you're actually the son of Ned and an unknown woman, that we wouldn't know who that woman is even after her identity has been a source of drama and mystery would make no structural sense to your story. So not so fast, kid.

In Kurt Vonnegut's Slaughterhouse Five, a dead person is described as being "in a bad condition in that particular moment, but that the same person is just fine in plenty of other moments." This is how I think of you, Jon. Currently, you're having a pretty miserable time, all bleeding and freezing. But this isn't the end for you. So buck up, buttercup: You've got work to do.