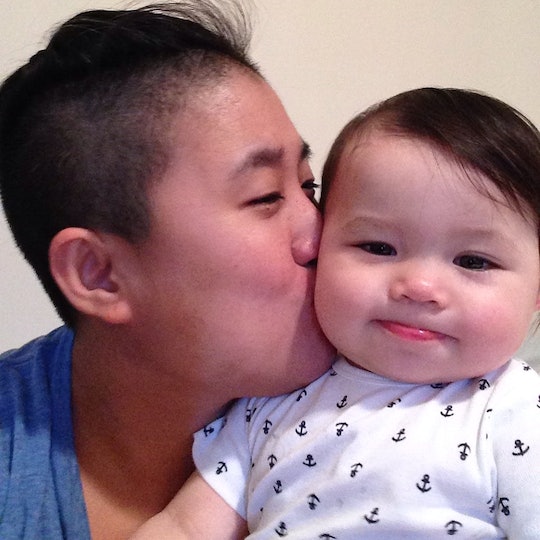 An Open Letter To Our Anonymous Sperm Donor

To the person who has no idea they helped us conceive our child,

I didn't give birth to our child; my wife did. And though we've never met our anonymous sperm donor, we see you in our daughter everyday. You're responsible for half of our daughter's DNA, so when I don't see my wife in our baby's cheeks or nose or ears, I see you. And while I'm forever grateful, I'm also terrified of the day our girl will want to go searching for the person responsible for those features.

My wife and I chose an anonymous sperm donor for this very reason. We wanted the line between donor and parent to be as finely drawn as possible. In a situation fraught with so many complications, we wanted the little that we could control to be as uncomplicated as possible. So we decided to look at the long list of cryobanks— more popularly referred to as sperm banks — that our reproductive endocrinologist gave us.

We knew we wanted a Korean donor to represent my heritage, but we never anticipated how difficult finding one would prove to be. Some cryobanks didn't even have any Korean donors, and even the one we finally chose had a paltry number of donors to choose from. Still, undeterred, we sat down and immediately couldn't believe how much it looked like a dating site. Everything from the site's color scheme to its copy was reminiscent of newspaper personal ads ("Gentle Blue-Eyed Giant seeks desperate lesbian couple to bestow his seed upon before jet-setting around the world" is not too far of a stretch from how actual entries read) and it made us even more nervous about the magnitude of our decision. There were so many factors to consider: Did we want someone who had similar interests and hobbies as us, or did we want someone who majored in astrophysics and is now working to feed underprivileged children in Africa?

Perhaps, if I'm being honest, this is really why I wanted to use an anonymous donor. I didn't want someone who could be used against us at any point, a witting participant, threatening everything that means the most to me in the world.

While we initially had fun with things like the Lookalike feature (something our sperm bank did that told us which celebrity a donor supposedly resembled) — which was almost as delusional as some dating profiles I've seen — eventually we had to start reading between the corny lines and figure out what we really wanted. Here was an incredible opportunity to choose an entire half of our child's DNA, and we could be as selective as we wanted. We stopped paying attention to things like which famous people the donors said they wanted to have dinner with, and started closely looking at family medical histories.

We really examined things we thought a donor could possibly biologically offer our child: height, weight, and whether or not they seemed more left- or right-brained. We decided we needed to have a donor whose profile listed that their sperm had resulted in pregnancies because we weren't emotionally or financially up for using sperm that hadn't yet crossed the finish line. We even took into consideration the age everyone was when they donated, as we'd read about the possible negatives associated with older sperm.

And to be honest, you weren't our first choice.

I was nervous about the fact that you have allergies. I kept envisioning a child with an incessantly runny nose and eczema, and the other donor we'd marked as a favorite had no health concerns whatsoever. But after our our first donor's sperm failed for us, something told us to go with you. And something in my gut very strongly told us to stick with you through four more cycles before we were finally successful.

The moment our daughter was born, I didn't recognize her, and that scared the hell out of me. She was beautiful, and I don't know what I expected her to look like, but I had this immediate yet fleeting fear when I first saw her that she was far more you than she was my wife. How stupid I was.

Whatever your intention, you helped a couple you've never met become a family. There is no greater gift than that.

As we've watched her grow in the last 10 months, everyday it becomes more clear that no matter where she's gotten her genes from, she's undeniably her own person. No one is ever going to be able to tell this girl who or what she is. She's already headstrong and persistent. She's incredibly curious about everything, not content to simply sit and play with a toy or read a book, she has to examine all sides of an object. It's obvious that she's trying to figure it all out. She's also incredibly engaging, often smiling and now even waving at strangers when we're out and about. When we're at a restaurant, I watch her looking at other tables, and it's not just that she smiles when other people do; it's as though she's actually understanding whatever it is that's making them happy and that, in turn, makes her happy.

The other week my mom asked me why I thought you had donated your sperm. She'd wondered if perhaps you needed the money or if it was an altruistic decision. Obviously I have no idea as to the answer, but I like to think the reason doesn't matter because regardless of why, we have an amazing daughter thanks to you. Whatever your intention, you helped a couple you've never met become a family. There is no greater gift than that.

While we'll always be profoundly grateful to you, your contribution doesn't make you her dad.

What I do wonder, though, is if you think about the sperm you donated. Do you ever look at Asian children and wonder if they're related to you? I look at Korean men and try see our baby's features. Maybe it's because I'm adopted, but not having a point of reference for where my physical features came from makes me similarly curious about the half of our daughter's DNA I have no point of reference for either. I think about whether or not I would recognize you, but I don't think about it for too long because the possibility scares me.

My wife and I have discussed at length how we'll tell our daughter how she came to be. We want to be honest about everything, including our reason for choosing an anonymous donor. Since I know nothing about my birth parents, I'm confident that when the day comes, I'll be able to relate greatly to the uncertainty and curiosity our girl will undoubtedly feel. My wife's father died when she was very little so she understands all too well what it's like to grow up without a dad. Together I am hopeful that we'll be able to navigate the very complicated waters ahead, steering our daughter toward the understanding that while we'll always be profoundly grateful to you, your contribution doesn't make you her dad — and that's OK.

I'm sure at some point during the angst of her adolescence she'll try and hurt us and somehow use your existence as a weapon, cutting deeper than she'll ever know. I live in fear of the day she lashes out for whatever reason and says that I'm not her real parent because we don't share DNA. Perhaps this is what I dread the most. Perhaps, if I'm being honest, this is really why I wanted to use an anonymous donor. I didn't want someone who could be used against us at any point, a witting participant, threatening everything that means the most to me in the world.

These days when I look at our daughter I am overcome with emotion for all she's become and all she has yet to be. Every once in a while, though, I still catch myself looking for you, but now instead of seeing you staring back at me, I'm finally starting to just see her. The cryobank recently offered members an opportunity to download donors' childhood photos. I can't tell you how long I stared at yours. There, in what looked to be a school picture, were our daughter's cheeks and nose. Her ears, though? Turns out, they're all hers.