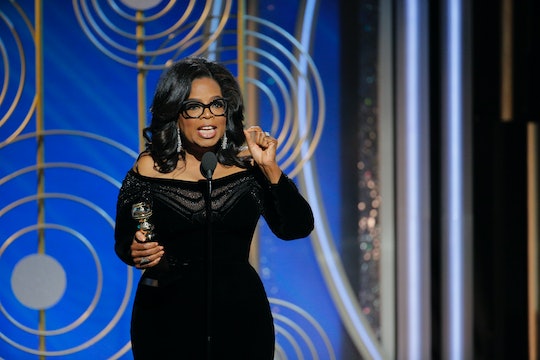 Over a million people have watched the official YouTube clip of Oprah Winfrey accepting the Cecil B. DeMille award for a lifetime achievement in the hours since it first aired. It has, to put it lightly, struck a note. This past weekend, while my two-and-a-half year-old daughter, Eve, and I hid indoors from the cold, we delved down a different YouTube wormhole — clips of Olympic figure skating and gymnastics routines. I needed a few minutes of peace, and wanted something a bit more edifying for her burgeoning sense of adventure than the sugary pop of Little Baby Bum, her preferred diversion. Of course, my plan to distract her failed completely. “What’s that? What’s that?” she asked. One of these days I will count how many times I hear this question over the course of 12 hours, a maddening litany of curiosity that, when addressed, only seems to spawn several hundred more questions. This is why my choice of video is so important: even at such a young age, my daughter is all the way awake.

Watching Oprah speak truth to power often brings my mother to mind, as she impressed upon me very early her lasting importance and influence as a cultural figure.

Watching Gabby Douglas perform somersaults on the balance beam, I explained to Eve how important it was to have balance and control, so she wouldn’t tumble to the ground. She watched, wide-eyed, and then stood up on the couch, throwing her arms in the air and yelling in triumph, “I balance!” She smirked each time I admonished her to be careful; I worried she would teeter over and end up on the floor. She didn’t.

Last night, after I had put Eve to bed, some of Hollywood’s brightest stars gathered at the 75th Annual Golden Globe Awards. In my typical fashion, I followed along on my Twitter feed until I fell asleep, and then woke up to scroll through the winners and notable remarks. And sitting in my kitchen, eating leftover pizza, I watched Oprah Winfrey accept the Cecil B. DeMille award for outstanding contributions in entertainment — the first Black woman in history to be given the honor — and deliver an incredible speech that will be shared and remembered for generations. She opened with a memory of watching Sidney Poitier accept an Oscar for Lilies of the Field in 1964.

As with so many other little Black girls, to me Oprah was a constant comfort, a nurturer, an auntie, a friend, the ultimate manifestation of Black female success and power.

Mr. Poitier’s name was one I heard very often growing up, as my mother had loved him since she was a young child, imagining her then-unknown father to have his face and demeanor. In fact, watching Oprah speak truth to power often brings my mother to mind, as she impressed upon me very early her lasting importance and influence as a cultural figure: this Black woman, born into poverty, who overcame incredible odds to become the iconic figure she is today. As with so many other little Black girls, to me Oprah was a constant comfort, a nurturer, an auntie, a friend, the ultimate manifestation of Black female success and power, a perennial reminder that yes, we could do that too, if we put our mind to it. All of those feelings came rushing back last night, and I cannot imagine a better time to have received the message she delivered.

I’m only two years into parenthood, but the reasoning behind so many of my mother’s quirks and habits have already become dazzlingly clear. Isn’t my desire to expose Eve to Black excellence in figure skating and gymnastics similar to my mother’s desire for me to research her idols, and to know Oprah’s importance? I had puzzled over my mother’s seemingly random swell of tears after I’ve shown off a new skill, performed a daring feat for the very first time, but now I understand what those tears meant.

[Oprah] reminds us, with stunning grace and eloquence, with such testimony to the life she’s lived and the lives she’s touched, who we are and who we have the capacity to become.

It seems only right that this speech, delivered in the midst of a precariously progressive cultural moment, should act as a revival of sorts. There was a reason that most of the winners last night breathed Oprah’s name when they approached the podium with such reverence, with such awe. Not because she is a Christlike or presidential figure, or one who can single-handedly change the course of our nation. But because she reminds us, with stunning grace and eloquence, with such testimony to the life she’s lived and the lives she’s touched, who we are and who we have the capacity to become.

It was a reminder that I sorely needed. And it’s one I feel honored to pass on to my daughter anew.

I have to wonder how to present this world to her in a way that she can not only understand, but learn to cope with.

Every day, Eve grows a little more bold. More curious. More intelligent. Imitation has become second nature; it is how she understands the wild world around her, how she synthesizes it and makes its lessons her own. I watch her develop in leaps and bounds and constantly, constantly, have to curb my desire to implore her to slow down, sit back, enjoy this ephemeral, liminal space between baby and kid. A part of that stems from my own nostalgia for her bygone leg rolls and toothless grins, for being her sole provider of nourishment, for her most daring acts of the day consisting of flipping onto her back or grabbing her own bottle.

And the other part stems from a much more grim reality: with each passing day and increasingly gloomy news cycle, I have to wonder how to present this world to her in a way that she can not only understand, but learn to cope with. I’m anxious about where we’re headed, and my ability to sanitize our society’s many shortcomings without outright lying to her as her endless questions become more complex. How hollow will my platitudes ring when she is privy to the kind of pain and injustice I can barely swallow on a daily basis?

Parsing the daily traumas of racism, sexism, classism, homophobia, and a host of other societal ills for my daughter is a challenge I’m not sure I’m equipped as a parent to handle. It feels dangerously irresponsible to look away from the reality of the world Eve will grow up in — but equally dangerous is allowing myself to become so despairing that I forget to offer her the hope and light that can be found as well.

'For too long, women have not been heard or believed if they dare speak the truth to the power of [brutally powerful] men. But their time is up' — those words are there for my daughter to hear one day.

As Mr. Rogers put it, times like these are when we look for the helpers. Those who use their resources, intellect, influence, and power to right the course, no matter how miniscule or temporary those efforts are. I can’t think of a helper whose legacy has shaped my idea of what Black female strength, talent, and drive can look like more than Oprah Winfrey.

“A new day is on the horizon,” she declared last night. When the future feels the most bleak, and I want to weep for what my daughter may someday face, this is the reminder I will cling to, for my family’s sake. The moment in which Oprah stood up on a stage and told America, “What I know for sure is that speaking your truth is the most powerful tool we all have," struck my soul. "For too long, women have not been heard or believed if they dare speak the truth to the power of [brutally powerful] men. But their time is up” — those words are there for my daughter to hear one day. Eve will watch this striking figure speaking to a spellbound room, a splintered nation, to her, personally, and know that there is always — always — hope.