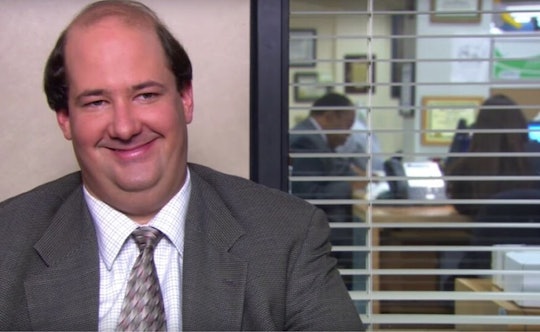 While it's looking increasingly unlikely that there is going to be a reboot or reunion of The Office (as recently as April 2020, the show's creator Greg Daniels called it "unrealistic"), that doesn't mean there's nothing else to look forward to concerning the mega-hit series. The latest: Brian Baumgartner (you know him as the lovable and goofy Kevin Malone on the show) has a brand new podcast called An Oral History of The Office that gives fans a peek at the behind-the-scenes moments from the show. I, for one, am counting down the days until it becomes available, because it sounds amazing.

Fortunately, we don't have to wait long. An Oral History of The Office is going to be available so soon: fans can start tuning in exclusively on Spotify on Tuesday, July 14. Created by Baumgartner (who is also the executive producer and host) and Ben Silverman, producer of The Office, this is a 12-episode limited series podcast. On July 14, three brand new episodes will be dropped, and then a new episode will be added each Tuesday moving forward. That means you'll definitely need to clear up a spot on your calendar.

The podcast consists of Baumgartner diving into all of the details about The Office while exploring one major question: how did such a small show, made up of a cast of unknown actors and actresses, go on to become one of the biggest television shows in the world? How did it grow from just an American spin-off of the original British series created by Ricky Gervais and Stephen Merchant to become its own entity, infinitely more well-known than the show it was based off of?

In this quite literal oral history of The Office, listeners will learn everything from how the show found its network home on NBC to the casting process to the stories behind the most memorable storylines and major moments. So, yes, this was basically made for super-fans of the show who can't get enough of simply watching reruns whenever possible. And, I have to say, learning everything there is to know about the series sounds almost as good as potentially watching a reunion or something like that.

Plus, this is sort of like a reunion, because each episode features interviews with other cast members from the show. Listeners can expect to hear from Steve Carell, John Krasinski, Rainn Wilson, Jenna Fischer, Angela Kinsey, Ed Helms, Ellie Kemper, and so many more of our favorites from the Dunder Mifflin Paper Company. They'll be sharing stories you've never heard before and basically just make you feel like reliving the show all over again. For even more behind-the-scenes info, there are conversations with the show's creator and executive producer Greg Daniels, co-creaters and executive producers of The Office UK Gervais and Merchant, executive producer Ben Silverman, and other members of the crew (and you know they know some good secret info we've never heard before). Oh, and just to keep things more current, there are some special guest stars you wouldn't expect at all, like Billie Eilish.

Just listening to the trailer is enough to fill your Office-loving heart swell with excitement. Sure, Baumgartner might sound a little different from his character, but he's still unmistakably the Kevin Malone we loved watching. And hearing the familiar banter from the rest of the cast is going to make you feel all warm and fuzzy inside.

Needless to say, this is the perfect podcast to listen to while you're social distancing at home, bored out of your mind. Be sure to tune in each Tuesday to be one of the first listeners to hear all of the juicy facts and secrets that are bound to be spilled.