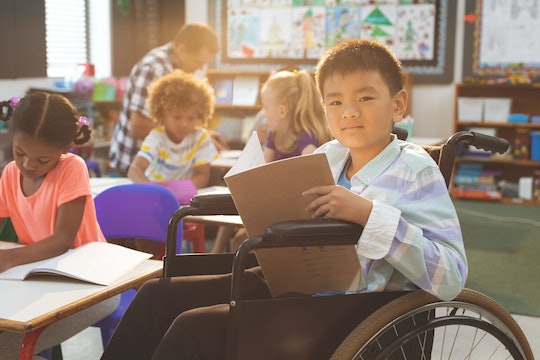 Students returning to school in Oregon this fall will be much happier. Thanks to a new law, students will be able to take days for themselves when they're feeling upset or burnt out, giving them the time to heal. It is so amazing that Oregon will now allow students to have excused mental health days, giving students the opportunity to focus on feeling better.

A new law signed into practice last month by Oregon Gov. Kate Brown will allow students to have excused absences for missing school because of their mental or behavioral health, according to CNN. More specifically, students can take up to five mental health days for every three months of school, according to TODAY. And the best thing is, they won't be penalized for it — students will be granted permission to make up any tests they might have missed, which means less stress over taking a day off, and more time to enjoy themselves.

This is huge, especially since Oregon's suicide rate "has been higher than the national average for the past three decades," according to The Oregonian. Giving students the ability to take a day or two off of school to destress away from the very stressful environment of studying and applying for colleges can possibly save lives.

Until now, Oregon schools only recognized specific excuses to qualify for an excused absence, according to NPR. Students were only able to miss school due to physical illness, a family member's illness, doctors (and dentists) appointments, or family emergencies. But with mental health added to this, it teaches both kids, their parents, and teachers that mental health should be taken just as seriously as any of these reasons.

It shouldn't come as a surprise to anyone that students were the driving force behind getting this bill into a law. Four students from Oregon, including student Hailey Hardcastle, began lobbying for the mental health bill based on their own experiences in school, according to TODAY.

"I took on this cause for a personal reason first off because so many of my close friends in high school struggled with depression, and there were times where I saw them at school when they really shouldn't have been there, would have been much better for them to take a day off," Hardcastle told TODAY.

Mental health should be a huge priority in schools. Studies have shown that 1 in 7 kids have a mental condition but half of them won't get treated for it. These mental health days are not just for those who have been diagnosed with mental health conditions. Students who are getting bullied, experiencing teenage burnout, and are feeling more sad than usual will be able to benefit from taking a day to themselves, according to New York Times.

But this shouldn't stop in just Utah and Oregon — it's something that all states should take into consideration. It's common for anyone to want to stay in bed because they're not feeling their best, or feel like they're on the verge of a breakdown and need a day to breathe. Everyone deserves a day for themselves and the opportunity to make their mental health a priority — high school students are no exception to this.