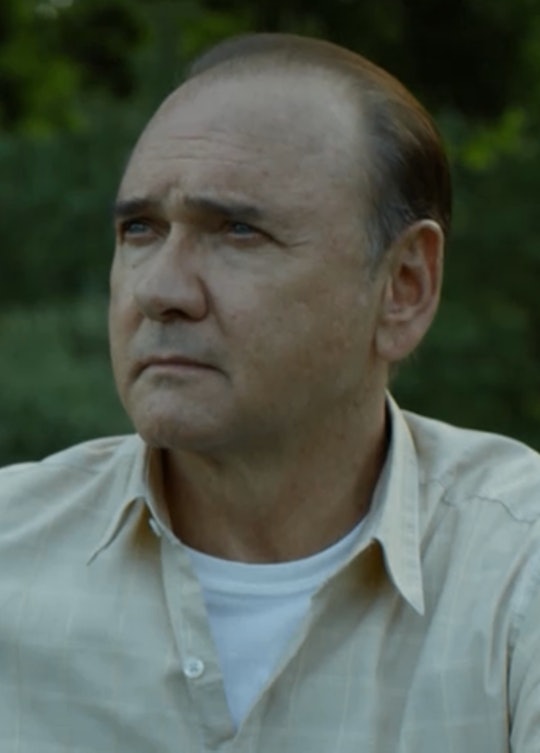 Y'all remember the Peachoid, don't you? That awful monstrosity outside Gaffney, South Carolina (hometown of Frank Underwood) that was causing loads of problems? For instance, a 17-year-old girl died while texting a picture of it to her boyfriend back in an earlier season of the show. It's something the good old Oren Chase — yet another of Frank's nemeses — wanted to capitalize on to get rid of the indomitable Underwood. Well now, after a three season hiatus, Oren Chase is back on House of Cards and it's got nothing to do with the Peachoid. (Warning: This post contains spoilers from Season 4 of House of Cards.)

Oren Chase is a Republican and the County Administrator in Gaffney. After his first attempt at dragging Frank into a scandal in Season 1 of House of Cards, we haven't heard peep one from him. The Underwoods had bigger fish to fry and bigger plans to hatch. But in Season 4, they find themselves back in Gaffney, and Oren finds himself back in their crosshairs. Not much has changed with Oren — he's still drinking sweet tea on his big front porch — and he's also still willing to do anything to screw Frank Underwood over, this time with the help of Claire.

Well, technically it's not Claire that has enlisted Oren to hurt Frank. Instead, it's Leann, Claire's aide, who asks Oren for an overnight job in which he erects a massive billboard that reads "Underwood 2016." It actually sounds helpful to Frank's campaign, right? Wrong, because the billboard features a photo of Frank's father, Calvin Underwood, shaking hands with a member of the KKK.

Even though he's been out of the game for a bit, Oren quickly accepted the job to hurt Frank's plans for reelection. He's still hating on Frank for getting the better of him, and this is revenge handed to him on a silver platter. He assumed Heather Dunbar was behind it, though even he didn't think she "had it in her" to do something so deliberately inflammatory, while Frank and Doug are suspicious of Press Secretary Seth. Meanwhile, well meanwhile we know the truth.

You almost have to feel sorry for Frank. Not quite, but almost. Because now, the racially charged floodgates are opened. He loses the support of Doris and Celia Jones and learns he's made a formidable opponent in Claire.

And you can't help but think about poor Oren. He is so far out of his depth with these two and naturally, he folds the minute he's in the room with Frank. He apologizes on national television for his part on the billboard. He is trying to run around with the big dogs, but he's nothing more than a chew toy for them. Stick to your sweet tea, Oren.