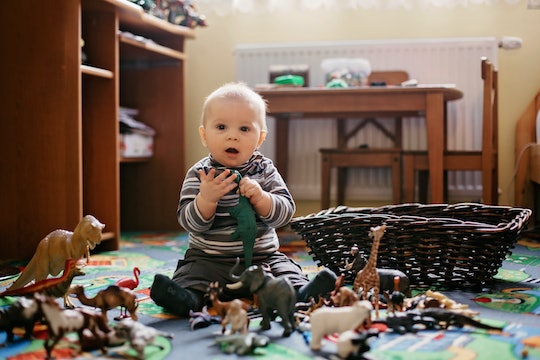 How Your Constant Need For Organization & Order Affects Kids, According To An Expert

I have a driving, intense need to organize the things in my space. Part of it is a productivity thing. I have severe ADHD, so if I'm not rigid, it doesn't take long for chaos to ensue. I will admit, I've been a bit extreme at times, going through periods when I throw away or donate a ton of stuff from around the house, often much to the chagrin of my children. When they start to rebel against my need to declutter and organize, I wonder does the constant need to organize affect your children? I've always seen it as entirely positive, but recently, I've been less convinced.

Research has shown that the development and refinement of organizational skills is a key predictor in future success, especially for people with ADHD. That does not mean that it is necessarily healthy to obsess over organization, eschewing all of the natural chaos that happens in your daily life. Michelle Newman, professor of psychology and director of the Laboratory for Anxiety and Depression Research at Penn State University, told Time that "Organizing becomes pathological when it’s interfering with your ability to focus or function, or it’s overly distressing.” This can spell big problems for the family and the children because stress tends to be felt across a familial group, according to a study from the University of Iowa.

I've recently begun to wonder if my need to see my bookshelves all lined up in the pattern that I've chosen (separated by genre, then author, then in series order) might be changing the way my children interact with those books. That is exactly what I don't want. I want them to feel like they can pluck one off the shelf at any time, settle into our big, furry papasan, and drift into another world. I don't want them to worry about upsetting my order, and yet, I can't help but think that this does concern them.

I reached out to Dr. Roseann Capanna-Hodge (Dr. Roseann), pediatric mental health expert and psychologist, and she tells Romper that the issue is more complex than you might think. She says that a parent's constant need to organize can be a detriment to the child, especially if the parent's expectations are unrealistic. "As a psychologist, I do see how this can result in some serious parent-child relationship issues."

She cautions that parents understand what forms of organization and levels of tidiness are appropriate for children based on their developmental stage. Obviously a preschooler is going to have a hard time placing books back on the shelf in alphabetical order or keeping the caps of their glue sticks firmly closed after each use. These things are simply out of the realm of their ability.

"I had a patient that became furious with her 4-year-old who couldn’t change the sheets on his bed," says Dr. Roseann. "The problem was that, developmentally, this isn’t something a 4-year-old can typically do and her demands went well beyond what was reasonably expected. This mom was a self-proclaimed 'neat freak' and had some unrealistic expectations about what her child could and couldn’t do." However, she was able to check in with Dr. Roseann and evaluate the weight of her own expectations versus the ability of her child, and come to a resolution that helped everyone.

The note of caution in expectations makes a ton of sense, but does the constant need to organize affect your children if you're not placing outsized expectations on your children? "When parents balance love and affection with clear expectations, even if those expectations center around the need for type A level organization, children are able to adjust in a more meaningful manner and respond effectively," Dr. Roseann says. At that point, it is a tool that they will be able to access in their own lives, even if they don't go to the same extremes that their parents might have taught them.

As with everything in parenting, if we as caregivers take the time to evaluate our own behavior, and our expectations for our children through a lens of understanding their strengths and limitations, as well as the love we have for our children, the outcome improves. My kids may never shelve their books in the same way that I do, but they'll learn new ways of organization that might apply to other areas of their lives, as long as I don't push it on them.

More Like This
10 Easy Vegetables To Grow At Home
May The 4th Party Ideas For Star Wars Day
From Captions To Gifts, These Are All The Kindergarten Graduation Ideas You Need
34 Instagram Captions Perfect For Preschool Graduation Photos