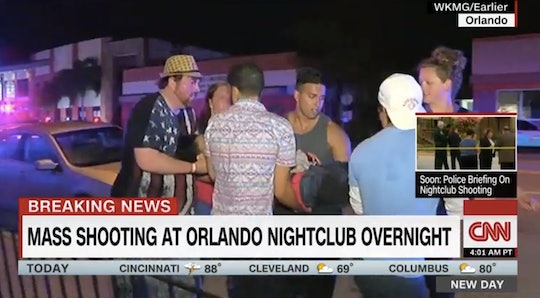 Orlando Nightclub Shooting Leaves Many Dead & A Community In Mourning

Many people are dead and several dozen more are injured after an Orlando nightclub shooting took place early Sunday morning. The shooting, which police have classified as a terror attack, began around 2 a.m. when shots were fired inside Pulse nightclub, a well-known gay club in Orlando. An officer responded to the scene after initials shots were fired and, according CNN engaged in a shootout with the gunman outside the club. The gunman then ran inside the club and the situation escalated.

"That turned into a hostage situation,” Orlando Police Chief John Mina said during a press conference Sunday morning. Mina added that local officials have classified this as a terrorist attack and the FBI is now involved. "It's appears he was organized and well-prepared.”

More authorities were called to the scene, including a SWAT team, and a shootout began between officers and the gunman. According to The New York Times, Mina detonated a “controlled explosion” after three hours to help clear the club and rescue the hostages. At around 5 a.m., the gunman was found dead inside Pulse nightclub. Authorities revealed the name of the gunman as Omar Marteen, and they've noted that he was not an Orlando resident.

Reports have noted than more than 320 people were inside the club at the time of the shooting and, of those, 50 are dead. Additionally, an estimated 50 more were injured and Orlando Regional Medical Center. The center, which is about three blocks from the club, was placed on lockdown after receiving several gunshot victims, according to The New York Times.

When the shooting began, many club-goers thought the sounds were part of a song. It wasn't until the chaos began that patrons realized the severity of the situation.

"I wasn't sure if it was the music, because ... it went with the beat almost until you heard just too many shots," club-goers Christopher Hansen told MSNBC of the incident. "It was just like — bang, bang, bang, bang, bang bang — and that's when you just know chaos is just, it was in turmoil."

Pulse workers immediately jumped into action, with one worker attempting to confront the shooter. In an effort to keep patrons safe, a rep posted to Pulse's Facebook shortly after shots began, advising anyone to "get out of pulse and keep running." A similar effort was made from the Orlando Police, who tweeted a warning to nearby residents to stay away from the area, accompanied by a tragic photo of the chaos that was ensuing outside the club.

This was the second shooting to occur in Orlando over the weekend. On Friday evening, former The Voice contestant Christina Grimmie was shot after a concert at Orlando's Plaza Live. She died due to complications from the gunshot. To say the city of Orlando is in a state of shock would be an understatement.

In addition to being deemed an act of terror, many are wondering if the Pulse shooting was a hate crime against the gay community. Though reports have yet to address what caused the gunman to attack Pulse, especially at it was celebrating Pride Week, many have taken to Twitter to show support for the people of Orlando and spread messages of love and tolerance.

During a press conference, Orlando Mayor Buddy Dyer said that local authorities are working with the FBI to find out what lead to the attacks Sunday morning, adding that the city has experience "a crime that will have a lasting effect on our community."

Our thoughts are with the people of Orlando and the family and friends of those affected by the shooting.