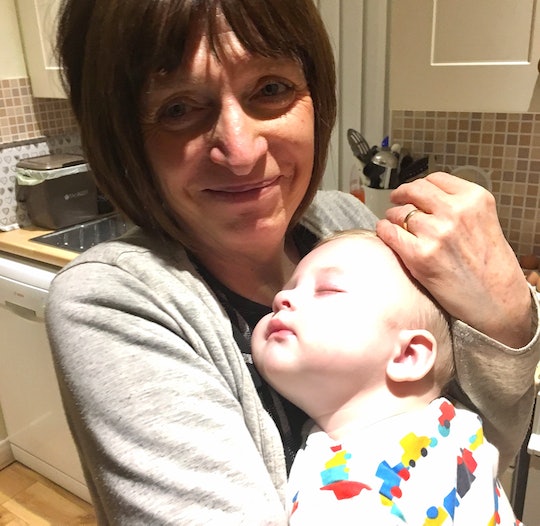 As first-time parents, we’re super lucky that our baby has slept through the night from around 3 months old. Otherwise, we likely wouldn’t have entertained the idea of having sleepovers at his grandparents' from 4 months old.

You’re probably sitting in one of two camps on this topic, the underlying theme being baby sleepovers are nuts. Some people are opposed for emotional reasons — they wouldn’t want to send their baby to a relative’s house for the night, no matter how close they are to them (“How could you waste a single heartbeat being away from your precious, tiny baby?!”). Others wonder how, logistically speaking, it would be possible for your baby to have a sleepover at just 4 months old (“I can’t even leave the room without my baby crying for my milk, let alone be apart for a whole evening!”).

Whichever camp you’re in, I don’t judge. And I’d like you to extend the same, non-judgmental courtesy to me. Because we moms are our own worst critics and we don’t need anyone else wrecking our self-confidence. That cool with you? OK, good.

Parents writer Melody Warnick argues that the sweet spot for starting sleepovers is between 4 and 9 months of age — after sleep has begun to consolidate, and before separation anxiety begins.

For my part, the separation anxiety was swift and immediate (my son seemed fine!). In the beginning, I couldn't even take my baby to my in-laws' for fear of not being able to leave him there. I used to watch from the window as my husband bundled our tiny boy off into the car, as I tried to keep my heart from shattering into a thousand pieces. When my husband arrived home, we'd both be wondering how he was getting on and questioning whether we were doing the right thing.

Every time we went to collect him, the answer was the same: They'd all had a lovely time.

The morning after was a different story. When we went to pick our son up, I couldn't wait to get in the car and drive across town to see my boy. At the start, I'd barrage my poor mother-in-law with a ton of questions ranging from, "How many times did he poo?" to "Did he wake in the night?"

But every time we went to collect him, the answer was the same: They'd all had a lovely time. Sure, my mother-in-law on occasion had a sleepless night, but she assured us it was nothing, as she had the rest of the week to catch up on her rest.

So, I guess our situation is a unique one. The main reason we first decided to ship our little treasure off to his grandparents' house three out of four Fridays of the month is because his grandparents were already hosting the rest of their grandchildren for a sleepover. By the time we brought our bundle of joy into the world, my mother- and father-in-law already had a long-standing arrangement with their daughter (my sister-in-law) to babysit her kids every Friday after the first Friday of every month.

It was no problem at all for such seasoned grandparents to add another little one to their sleepover rota.

Therefore, it was no problem at all for such seasoned grandparents to add another little one to their sleepover rota, especially considering their eldest grandchildren are teenagers now (more pairs of hands to help with the little ones!). Not only was it fantastic for my son's grandparents to spend quality time with him almost every week and vice versa, but it was also brilliant for my baby and his cousins to see each other regularly.

As a stay-at-home mom, with my son being an only child currently not yet at nursery, it's great for him to spend time not only with his family but with other children, too. Of course, we try to get out and about as much as we can and visit our mommy and baby friends, but some weeks trying to line up nap times seems impossible, especially in the darker days of the winter months. Having this set time to socialize almost every week has done my son wonders.

So what did it mean for us? It meant we could have a whole night to ourselves. Sure, he was sleeping through the night by the time he went on his first sleepover, but there were still times when he was going through a growth spurt or teething when he reverted to waking through the night.

Not only did it mean a guaranteed uninterrupted night's sleep, but it also meant time for us as a couple. Usually, even now, we just stay in and maybe order a pizza and watch our favorite Netflix show, but these are all luxuries one cannot fully indulge in while being new parents. If you know, you know.

It also meant we could have time for ourselves — which, in addition to having time as a couple to strengthen our relationship during the challenging days of adjusting to life as a family of three, is also super important. IMO, it's hard to be the best version of yourself when your cup is depleted. That includes being a parent. Taking a little time to revitalize lets me dive back in the parenting pool all bright-eyed and bushy-tailed.

At the moment, we're going through a slightly trickier time, where my now-18-month-old gets sad if I drop him off at his grandparents', but he's less so if my husband does the dropping off. For now, we believe we are doing the right thing for our toddler. The fact that his sleepovers are having a positive effect on everyone else involved is an amazing bonus.