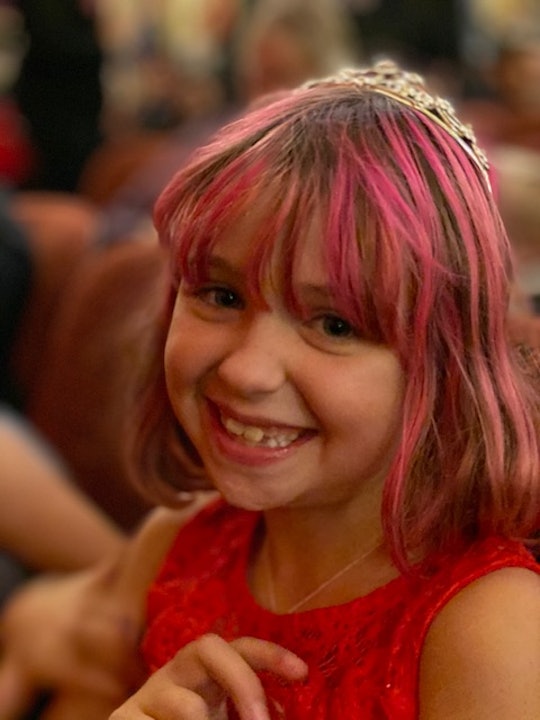 Why We Pulled Our Daughter Out of Her Gifted & Talented Program

Since getting pregnant with my first child, I have heard people whisper about the process of getting kids into good nursery schools, kindergartens and elementary schools in New York City. It's one of those stressful things that people bring up at the gym, at nursery school drop-off, and anywhere else parents of 3- and 4-year-olds can be found. "Where are you applying?" Oh, you know. The usual suspects. "How are you prepping?" *Shrugs.* "What about your (hushed tones)... zone school?" "Is there a gifted and talented program?" "Oh, you're moving to the suburbs?" "Oh, you're in that district?" "How do you feel about charter schools?"

That sort of thing. It's a process about which many, many books have been written and many, many alcoholic beverages have been consumed. Some people go through the entire process painstakingly. Others are happy with their zoned school. Some kids get into special programs by lottery or legacy. Some families move.

With our first child, we were in it. My hair became noticeably grayer. I used up all my vacation time to go from interview to tour to playdate, all really one opportunity after the next for people to judge me, my spouse, our parenting, our lifestyle, our kid, our everything. Were we educated enough? Involved with the parent association enough but not too much? Was our version of "diversity" — white family, stay-at-home dad, sibling with disabilities, a union that combines two wildly different cultures, religions, classes, educational levels, and on — diverse enough to get our kid noticed? Was she smart enough? Cute enough? And of course, what would I wear to these things?

Our girl was bright. So bright. But I knew that other families had bright kids too.

Someone advised us just to be ourselves, but the most conservative version of ourselves. The hours before these interviews found us slicking down cowlicks, tucking in shirts, ironing blouses, and dusting off the lone pair of heels that my daughters covet but which I feared would cause me to break my neck or ankle before I even opened my mouth. I felt like a rube. Was this what rich people dress like, talk like, act like? Smart people? Prep School X Parent-like people? I had no clue. A parent pal of ours told us these schools need us and our kid more than we need them. I wanted to believe that. Our girl was bright. So bright. But I knew that other families had bright kids too, and that some needed the opportunity more than we did. We decided that the least we could do was be over-prepared.

We spent hours poring over school websites, interviewing friends, colleagues and acquaintances who were alumni or whose children attended the schools on our list, deliberating the pros and cons of single-sex vs. co-ed schools, gifted and talented versus general education, taking notes on the Manhattan Family Guide to Private Schools entries and quizzing each other on what we think we'll be asked. I had been told time and time again that the process is so mysterious and cutthroat that no one really has any idea what any particular school is looking for, only that they are all so inundated with applicants that what they are looking for more than anything is a reason to move your application to the NO pile. These schools are competitive enough even for those who can pay the full tuition, so for us they were out of reach without a lot of help. We’d been encouraged to cast a very wide net so that the likelihood of being accepted somewhere with enough aid to make it affordable would be within the realm of possible.

That is hardly reassuring. I did not want a wide net. I knew exactly where I wanted her to go.

But a wide net it was. And that is why we found ourselves at one of the most traditional schools in the country at 9 a.m. one morning, sitting in a stuffy room in an ivy-covered brick building talking about my Harvard education and we spent our evening on the Upper West Side at an open house for one of the most progressive lab schools in the nation discussing the whole child and experiential learning. It's also why our 4-and-a-half-year-old, the product of two people who agreed wholeheartedly that testing at her age is a ridiculously inaccurate and inappropriate measuring stick of anything and nothing, would have nevertheless taken the Stanford-Binet, the AABL and the OLSAT all before her fifth birthday. We had to reconcile ourselves to the fact that what we’d feed her the day before such a test, how much sleep she’d get the night before, how I’d braid her hair, what shoes she'd wear or whatever shiny thing might distract her could make or break a test score or a "playdate" with ridiculously inflated implications.

We sat outside the room while she took the first of these tests, a high score of which would advance her to the next round of testing for where I wanted her to go: one of the most elite and elusive gifted and talented programs for elementary school kids not just in the city, but in the country. That school’s upper school is my alma mater so of course I wanted her to get in, but there is no legacy advantage. She had to get in on her own merit. We’d done no prepping; I’d had no idea even how to, and we were warned that if the tester detected prep of any kind, the child would be disqualified. In she went, cold. A noise machine made it impossible to hear anything through the walls except for a repetitive squeak. I froze. "Is that her?" I asked my husband, horrified. Squeak. Squeak squeak squeaksqueak. Maybe she's impersonating a mouse, I thought to myself. Maybe it's part of the test. They must be talking about animals! Squeaksqueaksqueaksqueak. Maybe it doesn't matter. The tester will see her brilliance through the squeaking, I told myself.

The score came in the mail a week later. Her score was high, but not high enough. She was eliminated; I felt judged. Rejected. Not good enough. I mourned, fretted, whined. What will my brilliant overachieving friends think? Three-hundred-and-fifty dollars and a vacation day down the drain, and that school is now off the list. I consoled myself by remembering they're looking for any reason to move her to the no pile. Any reason. Squeak.

I didn't have a clue what that reason could be until we were in Boston a few weeks later, visiting the children's museum on a rainy afternoon. MIT researchers were looking for kids her age to participate in a study and waved us over. She sat down happily, always willing to help someone in need. The questions began, but I could see she wasn't feeling it. She wanted to be climbing and exploring, not looking at a computer screen. She looked away and then I heard meow. Meoooooowww. Her part in the study was over. My heart sank as I recalled what we'd heard through the wall that day a few weeks before.

When she and I were out walking one day, she asked me if I'd liked being a kid.

The first gifted and talented school was a no, but she did end up getting accepted to or waitlisted at every single other school we applied to. We chose a private school for accelerated learners who’d expressed strong interest in her and who’d offered us enough aid to make it manageable. We were very happy with our decision and so was she. But at 5, she now had a 45-minute commute on the subway each way. She had two hours of homework every night. She was exhausted. My girl, always asleep by 7 at the latest, loved her assignments, everything she was reading, and all the people she was meeting, but if she wanted to take art or dance or have a playdate, it meant she was up well past her bedtime to fit it in. It was a lot, but it was also how I was raised, so I didn't think much of it.

Toward the end of that year we chose to move out of the city. We knew that leaving meant we'd have to leave our older daughter's school. Now our children are in the same public school, which is down the road from our house. They have a no-homework policy until fourth grade; they want children to have time to be children. It's true that some of the books my daughter read in kindergarten at her school for the gifted showed up on the reading list in second grade here. It’s true that a year later she came bursting through the door to tell us she had to make a diorama about people indigenous to this area. She was excited mostly because she had done a diorama at her old school in kindergarten and already knew what it was. The pace is slower here in this unquestionably excellent public school, and I sometimes fret that she can and should do more, that she could be pushed harder.

But here she gets to be a big fish in this smaller pond. She gets more individual attention. She gets to help others. And she has time for art class, guitar lessons, ice skating, and playdates. She flops on the couch and reads an entire book in an afternoon because she wants to, or sits at the table studying art books and drawing for hours. And when she and I were out walking one day, she asked me if I'd liked being a kid. "Not really," I said. It was true; I hadn't. "That's sad," she said after a moment. "I love being a kid."

My heart sang; we'd done the right thing. She smiled, squeezed my hand, and meowed. Meowww!