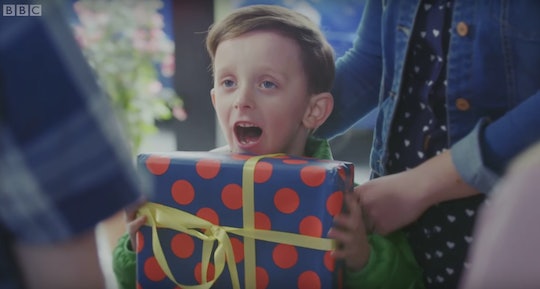 This New Kids' Show Features A Cast Of Actors With Autism, & It's About Time

A groundbreaking kids show is making its way to the U.S. Originally airing in Ireland, Pablo tells the story of a 5-year-old boy with autism, and what the world is like through his eyes. The show is getting international attention not only because the main character is autistic, but because the cast of Pablo is made up of actors on the autism spectrum themselves. It's not only an opportunity for kids and parents to learn about how their autistic friends think and process, but also a chance for young autistic actors to get an important opportunity and kids who are on the spectrum to have a show to watch with people who are like them.

Disability Scoop reports that the show originally aired on Universal Kids, and utilizes a mix of live action and 2D animation. The plot centers around Pablo's exploration of the world inside his mind, "Art World," in which he works with animal characters who help him navigate everything from friendship to anxiety. Originally airing in Ireland, the show made its way to BBC last year, and will now be featured on Universal Kids, available in America, Canada, and soon Latin America, Australia, the Middle East, China, and Africa.

The show's titular character is played by an actor named Jake Williamson, a 10-year-old who is on the spectrum as well. "Pablo is non-verbal, but in the 'Art World,' he can express all of his feelings with all of his friends, the animals. Non-verbal is something where you don't really speak that much, so when he goes into the 'Art World,' I think he feels a bit more happy that he's communicating with other people, and his friends are usually helping him through his problems," Williamson said in a video on BBC.

Indeed, art can help kids on the spectrum not only with sensory processing, but also as a means to communicate their feelings, especially if they are, as Jake noted, non-verbal.

When the show first premiered last year, it was reported that "real-life experiences" of children who are on the spectrum inspired each of the episodes, and that the show's creator, Andrew Brenner, did "extensive research" and consulted people with lived experience to share. The positive response prompted BBC to announce it would also be introducing 12 short films and six games to accompany the show.

Universal Kids said that its interest in syndicating the show has to do with the importance of facilitating better understanding. “Pablo’s uniquely authentic credentials and highly original premise provide fresh insight into what everyday life is like for children on the autism spectrum, with the aim of facilitating better understanding of their experience."

The news comes just a day after learning that Sesame Place is now autism-certified, which means that it is able to accommodate kids who are on the spectrum. Effectively, it means that there will be special equipment, sensory guides, and quiet rooms. It was also Sesame Street that first introduced an autistic character, Julia, last year.

Despite the progress, there's still a lot to be done. Currently, the representation of autism in Hollywood is more or less nonexistent, save for the occasional documentary or one-off blockbuster like Rain Man. And that's a shame, because it's estimated that 1 in 68 children is on the spectrum. On top of that, it's noted that autism makes kids targets for bullying, and although raising awareness about the prevalence of the spectrum is important, changing the social dynamic is a matter of generating empathy, which is best done when kids are young, and through a medium that they can relate to. All of this to say: a TV show that enters the mind of an autistic person is brilliant, not only for them to feel understood, but for the world to hopefully become more understanding.