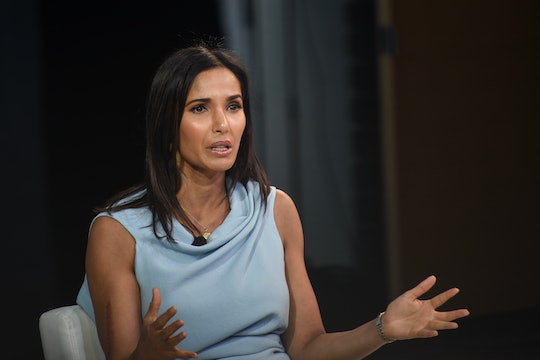 Padma Lakshmi Gets Political With Her Fourth Of July Dessert

While some people seek to keep any mention of politics far from their holiday parties, one celebrity mom opted to serve her political message by the slice at an Independence Day barbecue. Top Chef host Padma Lakshmi's Fourth of July pie included a message about closing migrant detention camps.

"A truly American pie for the bbq today," Lakshmi wrote in a tweet featuring photos of her Fourth of July pie. While Lakshmi decorated her dessert with a mix of berries and pie crust to resemble an American flag, her pie is likely unlike any patriotic dessert you've ever seen. That's because, between the flag's stripes the Bravo host spelled out "close the camps" in dough, adding a dash of politics to her holiday pie.

Reports regarding dangerous overcrowding as well as poor and inhumane conditions at Border Patrol facilities sparked widespread public outrage in the run up to the Fourth of July holiday. Photos released earlier this week by the Department of Homeland Security's Office of Inspector General showed migrant children, families, and single adults being held in overcrowded cells at Border Patrol detention centers in the Rio Grande Valley. According to government investigators, many migrants have been forced to remain for prolonged periods in standing-room only conditions as a result of the overcrowded facilities.

"We are concerned that overcrowding and prolonged detention represent an immediate risk to the health and safety of DHS agents and officers, and to those detained," a report released Tuesday by DHS' Office of Inspector General read. The report went on to detail at least three instances where investigators found migrants housed in cells at numbers far greater than the cell's maximum capacity. In one instance, 71 adult men were found detained in a cell designed to hold, at maximum, 41 adult females, the report stated.

What's more, investigators found a number of instances where U.S. Customs and Border Protection had failed to meet set standards for the transport, escort, detention, and search of migrants in their custody, including access to showers and hot meals.

The report from DHS' Office of Inspector General came weeks after lawyers blew the whistle on what they described as the "inhumane conditions" at a Border Patrol facility detaining migrants near El Paso, Texas. Lawyers who'd inspected the facility as part of a legal settlement told the Associated Press they found migrant children detained with inadequate food, hygiene, and medical care.

"In my 22 years of doing visits with children in detention, I have never heard of this level of inhumanity," the Associated Press reported attorney and co-director of the University of California, Davis' Immigration Law Clinic, Holly Cooper, said.

Back on Twitter, Lakshmi capitalized on the attention her Fourth of July pie had garnered and urged folks to contact their congressional representatives after the holiday to demand the closure of migrant detention camps.

Traditionally, the Fourth of July has long been seen as a time to gather around the grill and celebrate America with things fireworks and apple pie. But it's also a time to reflect on just what it means to be American, on the rights enshrined in the country's constitution, and the values and principles that make up its foundation. So perhaps Lakshmi is on to something and the Fourth of July is the perfect holiday at which to get a little political.