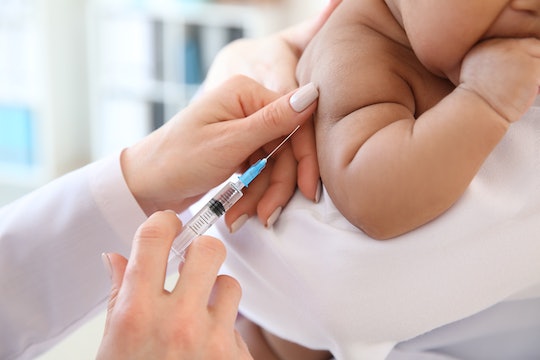 Here is a true thing you probably already know but I'm going to remind you anyhow: It can be difficult to get anything done when you're a working parent. And this applies to stay-at-home parents too, but the reality is you're more likely to encounter scheduling conflicts if your day is eaten up by meetings and deadlines. So when I saw the news that paid family leave is linked to increased vaccination rates in infants, I wasn't terribly surprised. Because trying to fit those appointments in when you're a working parent who can't afford to take time off is understandably difficult.

As many people probably already know, there is no federal paid family leave program for new parents in the United States, which means that many people who welcome a new baby in this country simply cannot afford to take time off once that baby arrives. And although there are many negative side effects to a lack of parental leave that most people can name almost instantly (emotional and physical health issues, difficulty breastfeeding, etc.), there is one side effect that might not be as obvious. It seems going back to work right away might make it more difficult to get your baby vaccinated on time.

A recent study from Binghamton University in New York looked at the National Immunization Survey to cull information about infant vaccinations between 19 months and 35 months in California, before and after 2004, when the state was the first to implement a paid family leave program. This paid family leave program offers employees working in the private sector to access a percentage of their wages for up to six weeks after their baby is born, offering them a chance to bond and develop a new routine as a family, according to The Los Angeles Times.

Researchers compared vaccination rates to other states without a paid parental leave program and found that parents were less likely to be late with their baby's immunization if they had access to paid family leave, according to Science Daily. Looking specifically at early childhood vaccines like Hepatitis-B (HepB), Diphtheria Tetatus Pertusis (DTP) and Haemophilus Influenza Type B (HIB), Solomon Polachek, professor of economics at Binghamton University, told the publication:

It is extremely important for babies to receive their vaccines on time since their immune systems are still developing, leaving them at a greater risk for contracting vaccine-preventable diseases. The issue here being that it is difficult for parents of new babies to try to fit in medical visits while also working, especially in those first few weeks. This especially true for the measles vaccine (MMR) because children need to get their first dose of MMR between 12 through 15 months of age, and the second dose between 4 through 6 years of age for it to be effective, according to the United States Department of Health and Human Services' (HHS) website.

So if anyone is still wondering whether or not paid family leave is beneficial, here's yet another item to add to the list of pros.