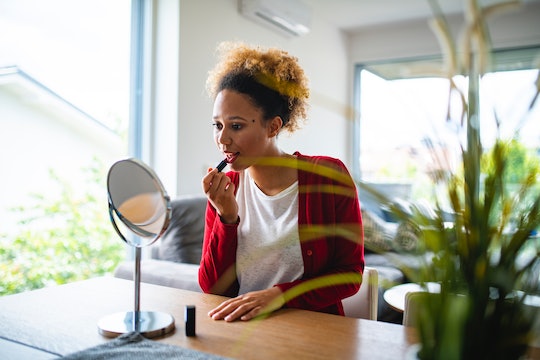 It's pretty amazing how symbolic color can be when you think about it. Pantone's new "Period red" color helps to end the stigma around menstruation simply by calling attention to it. Because it's weird that there is still a stigma about something that happens to around 50% of the population. (Sure, it's a little sad that in 2020 a company using the word "period" feels revolutionary, but there you have it.)

Pantone has partnered with the Swedish feminine hygiene product brand Intimina to release a new shade of bright red called "Period red," a shade which "emboldens those who menstruate to feel proud of who they are," according to a statement by Pantone Color Institute vice president Laurie Pressman. The statement went on to say that the color was created to help women learn "to own their period with self-assurance; to stand up and passionately celebrate the exciting and powerful life force they are born with; to urge everyone, regardless of gender, to feel comfortable to talk spontaneously and openly about this pure and natural bodily function.”

Pantone's Period red was created as part of a new campaign by Intimina to "normalize the most normal of bodily functions" called Seen + Heard, as per the statement, by encouraging conversations to develop on national and international levels about menstruation. Period red was designed to represent the color of a steady menstrual flow.

Period stigma remains a very real concern for women all over the world, particularly in countries like Nepal, where a 2019 study found that women were still being forced to sleep in "menstruation huts" every month even after the country banned the practice. In 2018 Global Citizen reported that 1 in 10 girls in Africa are missing school because of period stigma.

Releasing a color called Period red won't end the stigma, but it could go a long way to normalizing the conversation. As Flo Code, a company providing free access to menstrual hygiene products, noted on Twitter, " There is a new *official* color – Period Red! @pantone created this color to help break make menstruation more visible and normalize this normal body function. We love to see it."

I say everyone go ahead and paint their walls Period red. That would be one way to start the conversation.