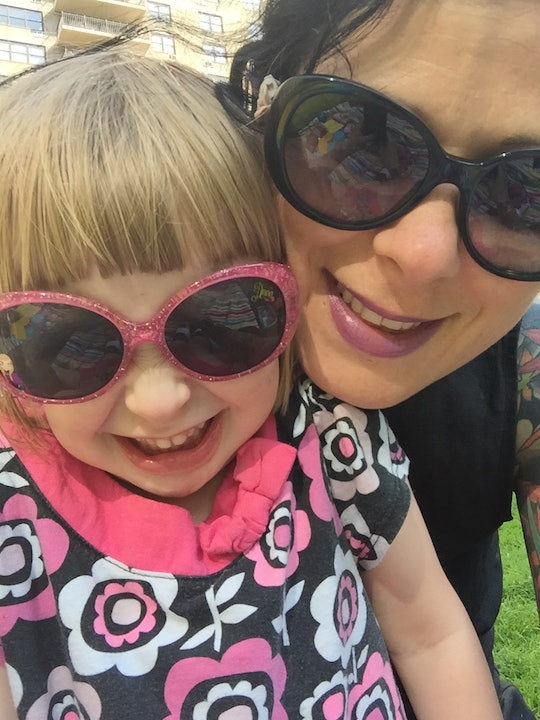 Parenting Won’t Be Like Anything You Imagined. It Can’t Be.

This weekend I tried to sync my phone and I couldn't because it was too full of photos. Pictures of me, twice hugely pregnant. Thousands of pictures and videos of my two daughters as newborns, toddlers, preschoolers. They were stunningly beautiful. Their lives were so new, so full of hope. Big dreams, big potential. A big future. Big sigh. I’d had so much planned and none of it went the way I thought it would. Parenting has just not been anything like I imagined. My heart felt heavy, and I couldn't bring myself to delete anything. I thought about what went through my mind when those pictures and videos were taken. All the assumptions I’d made about my children and the people they would become, the lives they would have. The future never happens the way we want it to or think it should. It can’t. And yet, grieving the loss of a future that will never happen — even if I know deep down it never would or could have anyway — is deeply painful for me.

I carried what I thought was a typical, healthy baby girl for 39 weeks. When Freyja was born, she looked perfect. (She still does.) When she was less than a day old, I held her in my arms and talked to her just like I did her older sister Thora. I told her how much we wanted her, how loved she was, how her whole life was ahead of her. I told her about all the things we would do together, how much in the world there is to explore, to see, and to do. I told her about school and work and travel and love and sadness and joy. I read to her from my favorite books and tried to empower her, even as a baby, to believe that she could do anything in life if only she put her mind to it.

As it turns out, there will be so much in life that Freyja will not be able to do, no matter how hard she puts her mind to it. She has a severe disability caused by a neurological disorder, and some things will never be possible for her. I spent the first few years of her life propelled forward by the notion that if I just hope it hard enough, will it hard enough and put enough effort into her recovery, I could fix her because that was what I intended for her all along. That if I willed her hard enough to walk, if I sent her to enough specialists, got her enough therapy, her brain would heal and she would live the life I always wanted for her.

That is not going to happen. I know that now. The obvious truth is that no child is going to live the exact life their parents always wanted for them, but when your children are neurotypical it can be a lot harder to come to terms with that because it’s harder to see. I can’t possibly create the life I think I want for Thora any more than I can with Freyja, but with Freyja, there’s no pretending. We don’t even know what her lifespan will be; it’s possible she won’t reach old age, or even adulthood. We have no way of knowing now if she will be able to live independently, go to college, have a job. It’s likely that she will never walk independently. She will always need to wear braces on her legs. She may always require assistance with tasks requiring a great deal of balance and stamina, and more. Empowering Freyja to achieve her dreams has become a very different conversation as she has gotten older. On the other hand, what I whisper to Thora in the dark at night about all of life’s possibilities hasn’t changed that much since she was a baby. It’s my perspective that has changed. The life I want for Thora now is the life she will want for herself, not the one I think she should have.

She talks all the time about what she is going to do when she’s older, 'like really old, like 18.'

Of course I wish that Freyja didn't have pontocerebellar hypoplasia. I wish she had a normally developed cerebellum and pons. I wish she could walk and talk with the ease that other children her age do. I wish that at as an elementary school kid she didn't have the busiest schedule in the family because she needs lots of extra physical, occupational, and speech therapy. I wish we didn't spend so much time in hospitals and doctors' offices. And I wish that her big sister’s life was not so impacted by all of it too. When we visited the Please Touch Museum in Philadelphia one weekend and walked through the pretend hospital section, I wasn't the only one horrified by the pretend MRI machine. Really? I thought. This is supposed to be fun? Thora was only 4 then, but she knew exactly what it was and she recoiled from it too. She walked right past the hospital section to the pretend supermarket. I wanna go food shopping, she said, and muscled her way over to the child-sized shopping carts and began to pile one high with produce. I was still stuck back there by the pretend MRI machine. A child lay on his back, sliding into it, while another donned a white coat and peered somewhat doubtfully into the apparatus. There were young children placing baby dolls on stretchers, listening to their heartbeats with toy stethoscopes. This was not fun for Thora, and I couldn't blame her.

There is still so much potential for Freyja. I know that. I know that not all the things I talked to her about when she was brand new are impossibilities. She talks all the time about what she is going to do when she’s older, “like really old, like 18.” She says she wants to pierce her ears when she’s a grownup. She wants to become a teacher. She wants to have a baby. For now, I tell her she can do those things when she’s ready to and leave it at that. Someday she will not equate piercing her ears with becoming a teacher or having a child of her own, and someday we will talk about each of those more. But not today.

I can’t even begin to imagine what her life will be like then. I don't know why it matters.

Freyja has made incredible strides in her life already, and at 7, her struggles are not over. Her life is not the one her father and I envisioned for her when we held her as a newborn. We hope she will be 17 someday, and maybe even 70. I can’t even begin to imagine what her life will be like then. I don't know why it matters. When it comes down to it, I know just as little about what Thora’s life will be like. It's unknowable and there is nothing in the world I can do to know it except live now and do the best that I can for them both every day.

It's been a long six years since Freyja’s MRI revealed what it did, since we got the preliminary diagnosis, since our lives changed forever. Tonight I lay with her at bedtime and breathed her in. I read books to her and she reads books to me. I felt present with her tonight, just helping her with words she doesn't know, holding her and loving her for who she is right now. It felt so good to be in the moment instead of worrying that she’s not reading well enough or that someday this problem or that problem may happen in her life. So maybe it is safe to delete some of those old pictures and videos.

I want to make space for new ones anyway.