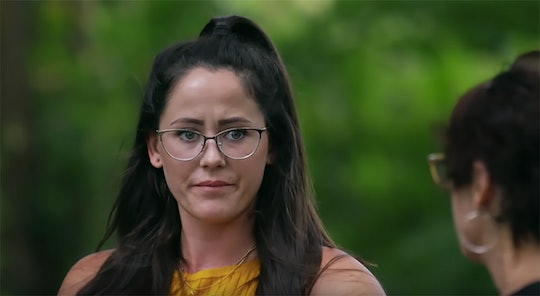 In what can only be described as the holy grail of disturbing incidents, Teen Mom 2 star Jenelle Evans' husband shot their family dog, Nugget, for supposedly snapping at their 2-year-old daughter, Ensley. Many fans were alarmed by the turn of events, including parents who believe Evans' husband, David Eason, mishandled the relationship between Nugget and Ensley.

Evans has owned many pets throughout the years, all the way from dogs to lizards. Little Nugget, a French Bulldog, joined the family in August 2018. "These dog days got us hanging out the window cooling off! Everyone meet Nugget the Frenchie!" Eason penned on Instagram at the time.

Sadly, Nugget's life ended earlier this week when Eason shot the animal at the family's home in North Carolina. Evans confirmed the dog's death in a Wednesday Instagram post, stating: "Nugget... I’m crying everyday. I love you so much and I’m so sorry. I’m speechless. You were my side kick and knew the moment I felt bad and would cuddle with me. You still had a lot to learn and a lot to grow from your lessons."

Evans and Eason did not immediately respond to Romper’s requests for comment regarding the dog's untimely death.

As for Eason, he shared a video — presumably moments before the shooting — of Ensley and Nugget playing. Ensley, a curious toddler, leaned in to kiss Nugget, prompting the dog to snap. Eason also shared a photo of Ensley's red cheek, but there doesn't appear to be a visible break in the skin.

Instead of giving up the dog to a no-kill shelter or a family without children (training Nugget was also an option), Eason shot the dog dead in the family's backyard.

I don't give a damn what animal bites my baby on the face... whether it be your dog or mine, a dog is a dog and I don't put up with that sh*t at all. I'm all about protecting my family, it is my life's mission. Some people are worth killing or dying for and my family means that much to me. You can hate me all you want but this isn't the first time the dog bit Ensley aggressively. The only person that can judge weather or not a animal is a danger to MY CHILD is ME.[sic]

There are so many disturbing angles to this story, especially where it concerns the senselessness of Nugget's death. As many parents with pets have already mentioned, little kids need to respect an animal's boundaries (no pulling, hitting, etc.), and dogs should receive training if they nip or snap at a child.

That dog didn't need to die for Ensley's protection. It didn't latch on or attack. If that was a bite, it didn't even break skin. Next time, sit with your toddler and teach her to handle the dog with care instead of filming it from across the room like a bafoon. The dog had to protect itself because David and Jenelle don't teach their kids to be respectful of the dogs' boundaries. They treat the dogs like toys, and D and J allow it.

"If the dog did nip at the child, most often that's a symptom of the child pushing the dog's boundaries which requires parental intervention to manage either the child or dog's access to each other," someone else said.

My dog has nipped at my kids for less, and has never broke skin. She’s a small dog too, and just doesn’t like to be messed with when she’s on top of the couch (she sleeps on the top corner of the sectional up against the corner of the wall, it’s like her little den). Any other time she loves (supervised) hugs and kisses. My kids know when she’s sleeping or hiding to just leave her alone. It’s pretty simple.

Chiming in here to mention that there are plenty of resources for families with young kids who are interested in dog ownership — some tips include positive reinforcement for both dog and child, teaching your child how to appropriately pet the dog, and supervising all interactions.

What's also concerning about Eason's video is that he continued to film despite Nugget's obvious signs of discomfort. And if this wasn't the first time the dog lashed out, as Eason claimed, then why didn't he intervene?

Of course, the big elephant in the room here is that this isn't the first time a troubling incident has occurred at Evans' home. Evans called 911 back in October 2018, claiming that Eason physically attacked her. The couple later chalked the event up to a "drunk misunderstanding," according to People.

Considering Nugget was Evans' dog, the following statistic from the National Coalition Against Domestic Violence is pretty compelling: "71 of pet-owning women who go to abuse shelters reported that their abuser had injured, maimed, threatened or killed pets."

Additionally, "40 percent of abused women stayed in an abusive home because they refused to leave their pets behind."

Many fans agree that Eason's handling of this situation was wrong. As countless parents have pointed out, managing the relationship between a toddler and animal requires a lot of work, care, and insight. I'm not a fly on the wall in Evans and Eason's home, but it's pretty obvious from the video of Ensley and Nugget playing that none of these aforementioned actions were taken in this case. R.IP. Nugget.