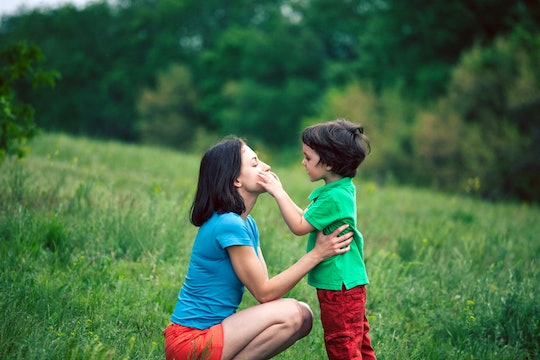 When I found out I was having a son, I was elated. He was going to get the cutest of overalls, flannel shirts, and soccer jerseys, and he was going to love his Mama more than anyone on the planet. I pretty much thought that would be the gist of it. Little did I know that raising a child who identifies as the opposite gender from my own would turn out to be a series of hysterical challenges. It seems I'm not alone, either, because parents are sharing hilarious stories about raising kids of the opposite gender, and some of them are true gems.

Moms and dads are hitting up an extremely popular Reddit thread to discuss the most surprising thing they've experienced raising kids of the opposite gender. All the usual suspects are there, like "How on earth did you manage to pee on the danged ceiling?" And "Why do I need Barbie's whole life story, family tree, mother's maiden name, and social security number just to have pretend tea?" (Duh, Dad, it's for the conversation starters. Amateur.) But there are also some genuinely wonderful responses to quandaries posted by parents. This is one of those rare Reddit threads that hasn't yet devolved into some pre-apocalyptic battle waged on the interwebs.

Dads seem to be flabbergasted at how soon female-identifying children form preferences about clothes. For Reddit user SakiClanche19, this means that "Mom will pull out an outfit for me to dress her in the next day and every time, I get the 'I don't want to wear that. It's not pretty.' When my wife picks her up from school she always asks why she's not wearing the outfit she set out. It was either [a] 30 minute screaming fit or let her choose her outfit. Lose the battle, win the war."

I can relate. My daughter knew her mind before she was two, and has dressed herself since. My son is 10, and just started caring about what he wears about a month ago.

The biggest parenting shocker to me was pretty similar in nature. I was blown away by just how closely my son adhered to many of the traditional gender roles with no prompting from me or my husband whatsoever. He liked monster trucks and race cars, and really loved watching people play catch. And can we talk about the penis thing for a minute? Is it really that interesting, gentlemen? Because he was legitimately fascinated by it, and probably still is.

I remember I asked my husband when the fascination would wane. He said "Well, I'm 36, and I'm still fairly fascinated with mine, so I'll get back to you on that one."

And heaven save us if they suffer some sort of groin injury. User cranfordio recalls a highly comical moment when his son hurt his favorite appendage. He wrote: "When my son was two he hurt his penis somehow, nothing serious. He turned to his mother and asked her to kiss it to make it better. She had to tell him no of course, but he didn't understand and was mad at her for a few days. First time I found out he can hold a grudge." I can only imagine how red that mom's face must have turned when her son asked him to kiss his penis to make it better. That's when you start to think, "This is maybe not the best solution parents have invented for injury treatment."

Dads have it easier. One of the most-repeated things they marvel about when it comes to their daughters is just how much they can talk. "I don't know when she breathes anymore, and it starts the second she wakes up and doesn't stop until she's dead asleep. (And then she talks in her sleep a good bit of the time too)," user SpunkCadaver wrote. It's called a life skill, SpunkCadaver, it will serve your daughter well in the future when she has to fight to get a word in edgewise.

No matter what gender your child identifies as, there are always going to be some serious surprises for you as a parent. Thankfully, there are places like Reddit to vent about them without your kid finding out you're as confused about the whole thing as they are.