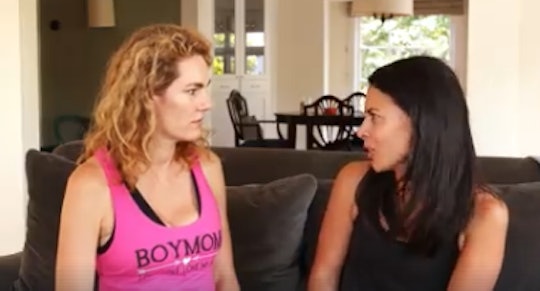 One year for my birthday, my youngest son Nathan wanted to wake me up with breakfast. He was 4 years old, and this is how he woke me: standing over my bed, naked other than his tiny boxer shorts, covered in chocolate syrup and peanut butter, holding an "I LOVE MOM" coffee mug full of a delicious milk/syrup/peanut butter combo. A combo that also decorated the walls and the floors of my home. He whispered, "Mom, here's your breakfast. I tasted it for you and you're pretty." This is the life of a boy mom. And this mom's viral video about raising boys is so perfectly accurate, it's making this boy mom oddly weepy. Because as a mom of four boys, I know a little something about the dirty/clumsy/gross/sweet life with sons.

As does Deva Dalporto, the woman who creates the amazing videos for YouTube and Facebook under the brilliant name, My Life Suckers. If you're wondering what sort of videos Dalporto creates, she notes on her Facebook page that NBC once dubbed her "The Weird Al of YouTube." And honestly, is there any higher praise than that to be had on this planet? Her videos have been viewed over 250 million times for good reason; much like her video about her life as a boy mom, Dalporto tends to hit that right note of being funny, silly, and really, deeply right about her subject.

In the video, Dalporto is asked by her real-life friend (and mom of three daughters) Jacquie Haggarty what it's like to be a boy mom. So she demonstrates... by farting in her face.

Then climbing all over her. Driving a toy truck over her head. Asking her a million questions while she's trying to read. Drinking water straight out of the tap. Peeing on the floor beside the toilet. Smearing a mystery substance on her arm. Climbing up on the roof. Explaining a complicated video game to her, ad nauseum (my God, did this one sound familiar).

Then ending it all with a hug, a compliment, and a heartfelt marriage proposal.

All of which sounds exactly right.

Now before anyone accuses Dalporto (or me, for that matter) of gender-stereotyping, let's take a moment to acknowledge this video was intended to be entirely tongue-in-cheek. And yes, I'm sure there are plenty of boys out there who don't love fart jokes (and girls who do), who aren't filled with a reckless, boundless energy that never seems to be satisfied until someone ends up bruised or falling out of a tree.

Those sons just happen to be different from the ones I raised... mine were frighteningly similar to Dalporto's own son. As Dalporto told Romper via email:

All of the things I did in the video are directly taken from stuff my son does EVERY. DAY. He really drinks from the faucet instead of using a cup. He really farts in my face on a daily basis and thinks it's HILARIOUS. He drones on about Minecraft for hours and hours and drives me crazy. But then he hugs and kisses me and tells me he loves me, and all is forgiven. That kid has me wrapped around his little, dirt-covered finger.

Considering her video has been viewed more than 10 million times already, I'm going to go out on a limb here and assume other people found Dalporto's version of a life with boys achingly familiar as well. And the response has been beyond anything she expected. "I'm so shocked and excited at how viral the video went. I'm glad I'm not the only parent who deals with this," she told Romper. "It's nice to know other people's boys and girls (because, yes, girls can do all these things too) are this crazy. It's a good thing they're so cute!!!)"

There is something so immensely satisfying about knowing your experience as a parent is shared by millions of other people. Something so deeply gratifying about being understood, about knowing other parents are just where you are now. Sitting on the couch, trying to read, as a little boy climbs all over your head and asks you for the millionth time which light saber color you think is the absolute best.