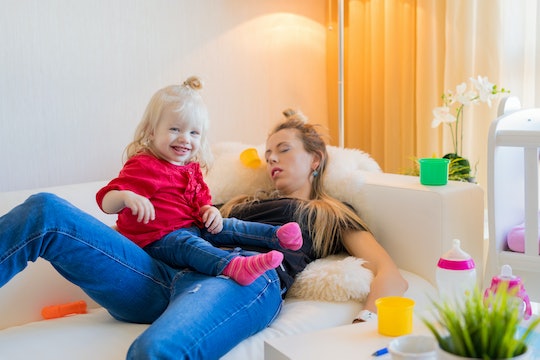 There have been days when I've been driving my kids to school or lessons or whatever and ended up accidentally driving us back home again in some sort of weird fugue state. Days when I've walked around mumbling grocery lists to myself or forgotten to put on shoes or fallen asleep folding laundry. I used to worry there was something deeply wrong with me, but it turns out this is pretty natural for a mom. Researchers recently confirmed that, yup, parents are totally worn out, and while I'm not surprised I admit I'm enormously relieved. It's not just me.

In fact, I'm actually far from alone in feeling overwhelmed by the monumentally huge job of raising humans. According to a new study, which was organized by PollFish and the Business Performance Innovation (BPI) Network, looking into how parental burnout might be affecting employee's productivity levels, 60 percent of 2,000 parents surveyed in the United States admitted they feel burnt out. Meaning they suffered from exhaustion, a drop in productivity, high levels of stress and feeling emotionally withdrawn, according to CNN.

The study also found that 30 percent of respondents pointed to pressure from trying to work and manage a home as one of their top contributing factors for feeling parental burnout. These parents also admitted that trying to juggle kids while both parents were working was a serious trigger for stress, according to BPI Network.

At least 40 percent of parents involved with the study also said their burnout could be described as "significant," and nearly half of respondents believed being burned out as parents had affected their quality of life.

I can picture a whole pile of parents out there nodding along like Tell me something I don't know. Stress, anxiety, and parenthood feel like they just go hand in hand, so it's no massive surprise to hear that parents are completely worn out these days. But the reality is, parental burnout has some pretty serious ramification if not managed or dealt with before it becomes significant. As the study noted, according to Total Wellness, some of the impacts of suffering with parental burnout include:

As much as parents might think they've gotten used to dealing with stress, perhaps that isn't the case. If parental burnout is causing parents to lose sleep, struggle with anxiety and, perhaps worst of all, find it difficult to enjoy quality time with their kids, things need to change.

Even employers have started to realize that parental burnout affects more than a person's home life; as parental burnout help expert Dr. Neil Brown said in a statement with the study's findings via PR Newswire:

Parental burnout is a state of physical, mental, and emotional exhaustion. It leaves parents feeling chronically fatigued, often experiencing sleep and concentration problems—and it can lead to depression, chronic anxiety, and illness. It can significantly impact work performance, productivity, business distraction and mindshare.

With the possibility of burned out employees in mind, BPI's chief strategy and research officer Dave Murray said in the same statement via told PR Newswire that businesses might want to consider adding counseling to their benefits packages. "It is staggering to look at the incidence of PBO symptoms among working parents in America and understand the implications this has for added employee burden, cost, concern, and downtime," he said, according to the news release. "Given this new PBO data, you would expect counseling for healthy parenting should certainly be added to the list of worker benefits."

There are some things parents can do to try to combat getting burnt out as well. The study by BPI found that social media distraction was considered a chief impediment to healthy parenting (29 percent of parents), with both parents working, behavioral concerns, bullying, and worry over violence at school all named as serious worries as well, according to Scary Mommy. Dr. Brown recommends, according to his statement in PR Newswire, limiting time on social media, setting clear boundaries for kids, and prioritizing time for yourself to have fun as some ways to alleviate possible burn out.

Because parents might be stressed everywhere, all the time. But that doesn't mean we have to accept this as our status quo.

More Like This
The 4 Main Parenting Styles & Which Is Best For Kids
When It’s Safe To Bring Your Newborn To A Restaurant, According To A Pediatrician
The 35 Top Toys For 3-Year-Olds
Can You Burp A Baby Too Hard? A Pediatrician Shares Tips For Gassy Tummies