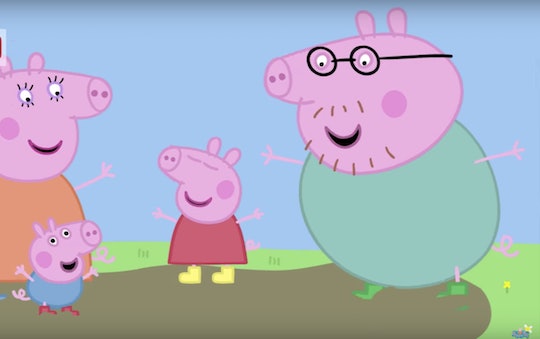 It's no secret that most children's television is somewhat geared toward the parents who have to watch it with their kids — whether it's in the same room or a distant hum coming from somewhere else in the house. But even with parental controls in full effect, there are hidden, terrible messages nestled into the most well-meaning of shows. Maybe. Or maybe it's just that people are so concerned about keeping their kids in a protective bubble that they're dead set on finding hidden, harmful messages in every television show their kids might watch (while they take a much-needed shower, of course). Take the parents who claim Peppa The Pig is fat shaming the father character on the cartoon, for example. (Et tu, Peppa?!) Is there a problem with the way kids see Peppa treating her father?

First and foremost: Fat shaming isn't OK. There should be no fat shaming anywhere in the real world, and television and movies and toys play a large part in forming kids' views about what's OK and "normal." But really, of all of the terrible things in the world, do parents really have to worry about Peppa The Pig fat shaming her dad too (who is, by all accounts, a pig)?

Romper's request for comment from Peppa The Pig's production company Entertainment One and Viacom, which airs the show on Nick Jr., was not immediately returned.

The Huffington Posts's Emily McCombs wrote an insightful article this week to express her, and other parents', distaste for Peppa The Pig's alleged fat shaming jokes about the show's father character. According to McCombs, there are times in the show when Daddy Pig is deemed not "fit," but then also manages to dive "seamlessly into a swimming pool," so it's kind of wishy-washy about what a "fat tummy" can and cannot do.

For anyone not in the know, Peppa The Pig is a British cartoon about a family of pigs. There's not a lot that happens in the cartoon. It's not an especially "educational" cartoon and there aren't many lessons your child can glean from it. It's literally just an adorable family of pigs that do things together. Sometimes, the father is called out in key moments (or entire episodes) for being fat, or at least "too fat" to participate in the family's adventures. His "tummy" is often the punchline.

Before you start to call out the "politically correct" army, read this one tweet from a dad on Twitter, who made a very good point:

Would you ever want to feel that way? No. No one ever wants to be compared to the character in their child's beloved cartoon that is the butt of the joke. Let alone the "fat joke." It may seem worth overlooking, for sure. After all, this is a cartoon about a family of pigs, right? Who cares?

In reality, it means a lot. For the record, being overweight isn't a character defect. So teaching little people in the back of a minivan, iPad in hand, that Peppa's dad is useless because he's overweight is pretty terrible. If the mom was the punchline because she was too — well, anything — would you laugh it off?

Moms are always stereotyped. But so are dads. And those stereotypes are usually that fathers are simply useless or, like Peppa's dad, too out of shape to take part in a daughter's world. That's not true. And that "defect" isn't necessarily funny or cute.

More importantly, maybe these upset parents have a good point: Instead of teaching kids it's okay to mock a person's physical appearance, even in lighthearted way, maybe focus on Daddy Pig's bad dad-jokes (it's a cartoon, but I'm sure that adorable animated pig has got plenty of them, come on). Either way, it doesn't mean your kids have to stop watching Peppa — it just means you can now have a very important conversation with your little ones about how wonderful diverse bodies really are.