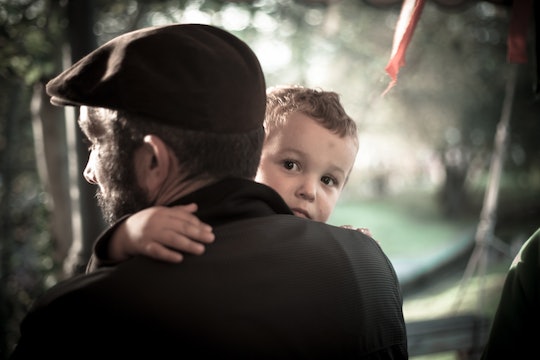 10 Things We Need To Stop Saying About Dads Immediately

As a mother, I've admittedly grown tired of the conversation surrounding or describing fatherhood; so, I can't imagine how you fellas feel. We've become so accustomed to talking about fathers as secondary parents. We praise them for doing even things that are the most basic as far as what is required of parents, while simultaneously downplaying their importance in kids' lives, as well as the value of their love and involvement.

Thanks to a society plagued by sexism and misogyny that teaches men to suppress their feelings and avoid all emotions, men (and plenty of women) talk about fatherhood like it's a joke: Fathers are so funny in their failures when they try to "be like mom," and fathers are just so silly, trying to be parents when it's clearly not something they're "programmed" to be. It's disheartening, to say the least. It puts an unfair burden on women to do most of the parenting and handle most of the responsibility, while also telling men that their non-monetary parenting contributions simply do not matter as much, are not as required, and when they do occur (and when they're magically without tragic, endearing dad-flaw), they are worthy of a parade that moms never get for doing the same stuff all the time.

But the truth is, fathers are just as capable of being outstanding parents as mothers are. Fathers are just as devoted and involved, and more and more men are becoming stay-at-home fathers, so the cultural "norm" is changing in a way that other generations have never seen. Furthermore, the elaborate gold stars we give dads simply for being involved parents are not only offensive to moms, and not only perpetuating of problematic ideas about gender roles, but they are offensive to dads; they're ultimately saying, "Wow, you're doing something that is totally not what a "man" does — how cool for you!" Like, what guy wants to hear that? Let's just let all of that "good dad" stuff be considered "normal parenting" stuff, and do away with the celebrations whenever a dude-parent does some of it, and see how it works to everyone's benefit.

As our culture continues to change, so should the way we speak about fathers. With that in mind, here are 10 things we need to stop saying about dads: