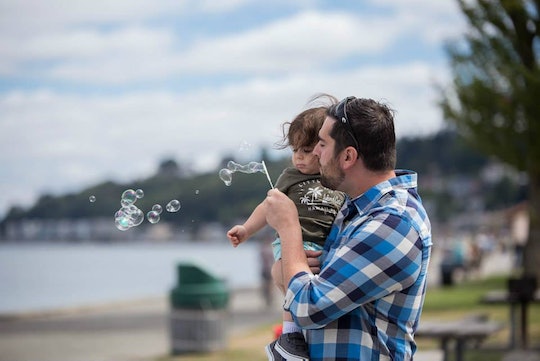 The One Thing We Absolutely Need To Stop Saying About Fatherhood

I've only been a mother for a year and a half, so I'm still learning and growing and attempting to navigate parenthood as sanely and successfully as possible. As I continue to master the struggles of motherhood, I am also learning about fatherhood via my partner. While we can't body swap, and wearing one another's shoes would do very little, we do get some insight into one another's roles; the socially constructed ones we feel pressured to adhere to, and the personal ones we've created for ourselves, based on what works for our family. And it is while watching and learning from my partner — and his interactions with our son, as well as society at large — that I've realized there's one thing we must stop saying about fatherhood.

I've watched as my partner has worried for not one, not two, but three people. When I became pregnant with twins, I could see the worry weigh the future wrinkles on his face, and I could see that while I was only worried about two potential people, my partner was worried about three. When we lost one of our twin sons at 19 weeks, I watched as my partner mourned silently, his emotions tied to his chest by the binds of a society that considers men weak when they visibly lament. I saw him watch me, worried for my physical and mental health, unsure if it was appropriate for him to grieve because he's not a woman and he wasn't pregnant and he didn't lose the sensation of a baby's tiny hiccups.

Now that we have our son, I've watched him do night feedings and change an untold number of diapers and get excited about dressing a tiny human in that one particular outfit. I've seen him get emotional when we packed newborn clothes away, and wax nostalgic when we look back at old pictures of our once-sleeping-baby-turned-rambunctious-toddler. I've watched from great distances, thanks to the convenience of technology, as my partner parented alone while I was on a business trip. He's been with our son from morning to next morning to the next, happy to spend one-on-one time with our kid's tiny giggles and wide smile and sweet eyes.

In other words, I've watched my partner be a parent to our child, and have watched him do so with all the devotion, commitment, and emotional complexity that I do. So why is it that, when a father parents, we call it "babysitting?"

Seriously, this is such a weird thing that both unfairly burdens mothers with a disproportionate sense of obligation, and also belittles a father's involvement in their kid's life. Why do we shower a father with praise for simply being a father? Why do we talk to fathers like their roles are secondary; an addition to motherhood that some great fathers do but most fathers don't and that's okay, because they're fathers? The more we reinforce a social construct via these subtle yet powerful words or phrases, the more we harm past, present and future mothers and fathers.

And yes, right now I'm talking about heterosexual couples wherein one woman and one man are raising a child together. But even still, when you look at same-sex couples who have kids, there's always the subtle prying and attempts by outsiders to figure out who is the "dad" and who is the "mom" in the situation. It's like no matter what shape a family takes, nor who the actual people are in it; even when there are inherent, biological limiting factors in play that would appear to make it impossible to reduce a family to a set of pre-fabricated stereotypes about male and female parenting roles, people still find a way.

And always, without fail, whoever the "dad" is (whether that title is one a person chooses, or one which is unilaterally projected onto them by an outside audience who feels entitled to take away someone else's ability to live authentically in service to their need to make that family "make sense" to their stereotype-addled sensibilities), they are somehow cast as "less" of a parent than the mom.

Just because one parent cannot experience pregnancy or childbirth (and, in fact, so many families are made up of parents between whom no one can do those things), doesn't mean that parent is somehow less than or an afterthought or a ghost author of your kid's story. Fatherhood has just as many responsibilities as motherhood, and it is up to the parents to determine who does what based on what works for them and their family dynamic.

Always, without fail, whoever the "dad" is, they are somehow cast as "less" of a parent than the mom.

Our culture, for reasons only sexism and the almighty patriarchy can describe, long decided that fatherhood was a secondary subset of parenthood, and when we tell men that they're "babysitting" when they're being parents or publicly praise them for getting up with the baby or changing a diaper, we're reinforcing that mindset. We're applauding an adult for simply being a responsible adult, and while sometimes that's necessary because adulting is hard and responsibility can be the worst, we're also putting unnecessary pressure on mothers to do more than they should, simply because they're women.

I've seen my partner seek out, ask for, and then just take on more parenting tasks. I had to unlearn what society has taught me, and I've made my son's father a true partner in parenting. In the throws of postpartum recovery, I truly thought I was to be responsible for every feeding and every diaper and every nap time. I didn't want to relinquish control, because I was convinced that would make me a bad, lazy, and uncaring mother. I was taking on more than I should, because I was raised in a culture told me I should; that that's what a "good mom" did.

But then I watched my partner, and I learned not just about motherhood, but about fatherhood too. I learned that my partner has, and should have, just as large a part in our son's life, as I do. I learned that he never babysits, because he's the dad. I've learned not to shower him with public praise just because he wakes up at night or changes a diaper or takes the baby so I can have a girls' night.

I've learned a lot in the year and a half since my son was born, about myself and motherhood and parenting and everything in between. But perhaps the most vital lesson I've learned has less to do with me and more to do with my partner. I learned that we need to stop talking about fatherhood like it's a secondary parenting role. Because it isn't.

More Like This
40 Valentine's Day Outfits Your Girls Will Adore Showing Off This Season
Julia Fox’s Apartment Tour Is Peak Mom Realness
Winter Travel Tips For Families
Tips to Beat Jet Lag, For You & Your Kids
What Parents Are Talking About — Delivered Straight To Your Inbox