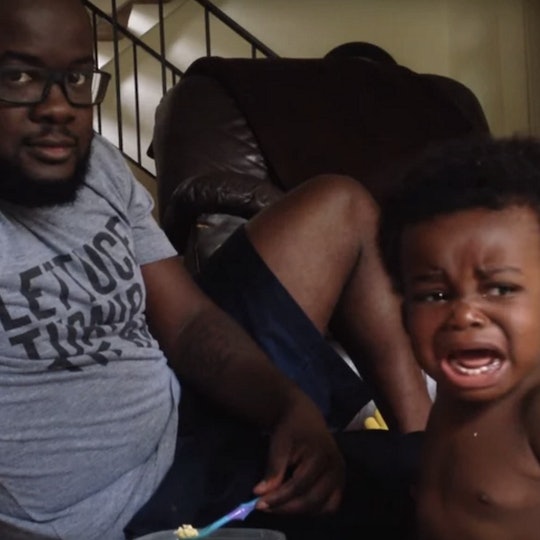 This Stay-At-Home Dad's Day With His Two Kids Is So Funny, In Case You Were Wondering What They Did While You're At Work — VIDEO

Being a stay-at-home parent can be simultaneously rewarding and frustrating; hilarious and terrifying, all at once. I've known the struggle for almost two years now: working when my son is sleeping, feeding him nearly all his meals, never getting to pee or shower alone, doing everything in my power to get him to submit to that elusive spell of nap time. After all this time, I'm surprised I hadn't thought to record what my day is like in order to show my husband, who works outside the home and only gets a mild version of my every day life on the weekends.

One stay-at-home dad did have the good sense to get it all on video, though. Inspirational hip-hop artist Beleaf is, first and foremost a father to two adorable toddlers, and he documents the beauty and hilarity of his daily routine in the video Patience or Lack Thereof. If you're a stay-at-home or even a work-at-home parent, you'll likely recognize many of these scenes from your own life: chasing down your kid to get them to eat anything, having impromptu dance parties, taking them outside for some playtime, the sticky messes, the crying for no reason, the always-treasured snuggles that remind you of why you're doing this in the first place. It's all there, and it's all part of Beleaf's latest web series, Beleaf in Fatherhood (which is a great title, by the way).

As the video starts, Beleaf shows the camera a pack of birth control pills, except there are only about two or three random pills left in the pack. It's a horror scene we all recognize: the toddler who got into mommy's things when she wasn't looking. You already know this is going to be good.

Next, we see the start of the day: warm cuddles in bed with Beleaf's two cute kids, Theophilus and Uriah, followed by breakfast time on the living room floor. (Because what toddler has time to just sit in a chair and eat?)

Our new favorite SAHD now discloses his fear of neighbors thinking he's hurting his kids because they won't stop throwing tantrums. I have the same feelings, especially whenever I go out and my son decides that it's the perfect time to scream bloody murder and kick and punch me because it's time to leave the playground. They are going to call child protective services on my ass for no reason, is a thought that runs through my mind all too frequently.

Beleaf then introduces us to the next segment of this video, roughly titled, "No one can understand you, bro," in which one of his sons attempts to...tell a story about a monkey at the zoo? Recount the last book he read? Who the hell knows! He hasn't quite gotten that whole talking-in-complete-sentences thing down yet and it's way too funny.

The rest of the video goes like this, more or less, with nothing but melt-your-heart-isms from his two smiling kiddos. Check it out below and see if you aren't inspired to document your own day.