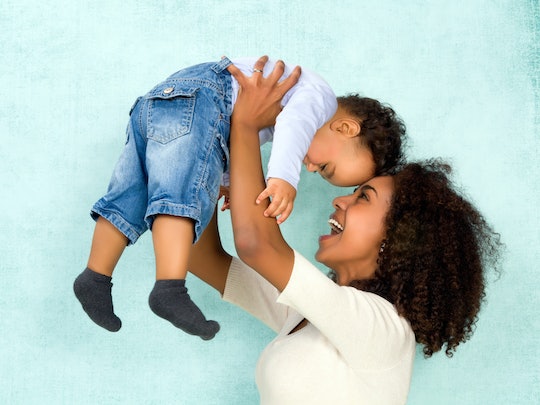 Parents Really Do Have A Favorite Child, New Survey Finds

When asked the dreaded question, "Who is your favorite child?" most parents will plead the fifth. "No comment." "I love you both equally." "Neither of you, as long as you keep asking me that question." As my parents' oldest child, I've heard it all before. But according to two recently-published surveys, it seems many parents do have a favorite child after all — and it's often the younger one. (Mom, dad, you will be receiving a call from me later.)

But of all the combined parents and grandparents who participated in the surveys, approximately half agreed that choosing a favorite child was awful.

Justine Roberts, founder of Mumsnet, said that while favoritism can be detrimental, it doesn't have to be. She told the Mirror:

Favouritism is one of the last taboos and can provoke a lot of guilt, so it’s important to say that feeling a greater affinity for a particular child is fairly common, and doesn’t have to be disastrous.

Roberts argued that liking one child more than the other is OK, as long as you love them equally and fully. "Toxic favouritism, where siblings become aware of being treated unfairly over the long term, is a whole other ball game," she told the Mirror. "The distilled Mumsnet wisdom on this issue is that lots of parents like their children differently - the crucial thing is to love them all wholly."

Another study, published in the summer of 2016, analyzed the factors that may contribute to a parent's favorite child. The paper was published in the August issue of The Journal of Marriage and Family, as per The Cut, but it is no longer available on the journal's website. For the paper, researchers studied 381 mothers who had two adult children, and found that mothers were three times as likely to feel closer to a daughter than a son, indicating that gender is a factor.

One other strong indicator, the study found, was whether or not a mother's children shared her beliefs on a variety of important topics, such as religion or politics. The study also found that trying to convince a parent that you are worthy of being their favorite child by flaunting your accomplishments, taking care of them in their old age, etc., is often ineffective.

Unfortunately, the surveys conducted by Mumsnet and Gransnet did not take into account the gender of the participants not their children and grandchildren. It would be super interesting to see a study that looked at both factors, so hopefully one will surface soon. In the meantime, I need to go call my parents and prod them for info on their favorite child. Wish me luck.