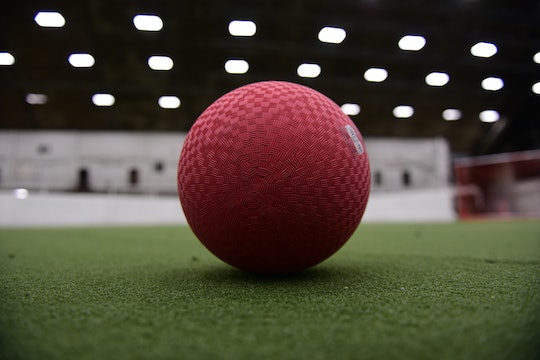 Parents, It's Time We Have A Talk About Dodgeball

The other night at the dinner table it was clear that my daughter was upset. When I asked what was bothering her she shared that she had been hurt during Physical Education (PE) class. As a result, she said she never wanted to go back. PE was her favorite class, though, so I pressed her for more details. That's when she told me that they had played dodgeball, and I instantly knew what had happened. So, parents, I think it's time we have a talk about dodgeball... because it's brutal AF.

Before that heartbreaking conversation with my daughter, I had assumed dodgeball was a thing of the past — like lawn darts or gym teachers who made you climb ropes and run laps until you puked. I had thought we had evolved past the whole "throw rubber balls at other children's faces" phase of physical education, but I was wrong. My daughter described what happened — that kids had thrown a bunch of balls at her and it was terrible and it hurt — and I realized that not much has changed in 30 years. Unfortunately.

I've never understood what's so "positive" about splitting children up into teams and encouraging them to throw projectiles at one another. And at a time when school violence, bullying, and children and teen suicide are real problems, this outdated practice seems so counter-intuitive. How does dodgeball fit in at our schools when those same schools have violence prevention programs? How do we teach our kids to be kind to one another, and to never inflict pain on one another, when, in the next class, we're happily promoting violence in the name of physical activity?

I, along with everyone I know who grew up in the '80s and '90s, have my own horrible dodgeball experiences and stories to share. From being picked last, to being eliminated first, to being hit so hard I had a bloody noses, to feeling targeted, intimidated, and humiliated by the more athletic kids, dodgeball was never a "fun" experience. Instead, it was terrifying and daunting and a source of anxiety — all things a young child doesn't need weighing them down as they're trying to learn at school.

If the goal of a PE class is to teach kids to be active, and to highlight how fun physical activity can be, then games like dodgeball need to be left in the past where they belong.

Now that I'm a parent I think this "game" is dangerous, exclusionary, humiliating, and totally unnecessary. Turns out, I'm not alone. According to the Society of Health and Physical Educators (SHAPE America), dodgeball should not be included in PE class. Not only does it promote violence that wouldn't be tolerated in any other school setting, but it doesn't give kids the physical activity they are supposed to get during PE in the first place, especially the kids who are eliminated first.

As Jeff Yang, Wall Street Journal columnist, told NPR, "I mean, I love team sports. I have nothing against team sports. I have issues with mob sports, and dodgeball is — from my own personal experience — the one systematized opportunity for bullies to target the — essentially, to winnow the herd from the weak and infirm." So, once again, I have to ask how it's possible that we can teach our children about inclusion, empathy, and kindness if we're simultaneously encouraging them to throw rubber balls at their classmates' faces?

Thankfully, school districts in states like Texas, New York, and Massachusetts have banned dodgeball and other so-called "target" games, according to NBC News. But not every state or school district is jumping on board. According to the Advocate, a state-wide ban failed in Louisiana in 2017 and after dodgeball fans argued that kids liked the game too much for it go be eliminated from PE curriculums entirely.

I don't believe that our schools should champion games that only work for certain kids. I don't think we should be targeting the less-athletic among us by encouraging our kids to be involved in games that make those who aren't as athletic feel excluded or bullied. If the goal of a PE class is to teach kids to be active, and to highlight how fun physical activity can be, then games like dodgeball need to be left in the past where they belong.

New Jersey PE and health educator Shannon Birckhead, M.S. agrees. "I won’t use dodgeball in PE. Instead, we play a lot of games with target practice at objects, not people," she tells Romper via email. "All of the skills learned in dodgeball can be learned in activities that are much more kid-friendly."

Birckhead then went on to describe one such game; a game that doesn't involve exclusion or a high chance of physical injury. "Half of the students hold a bucket, laundry basket, or a hula hoop, and they move around as the other half of the students attempt to throw a yarn ball into the object being held," she says. "This recreates the movement in dodgeball without any of the pain or bullying."

According to SHAPE America's position statement on dodgeball, the goal of PE programs is to give kids an opportunity to move. "Research shows that many U.S. children and adolescents do not engage in enough physical activity to build the foundation for a healthy lifestyle." Dodgeball does not fulfill this requirement, especially since, when kids are eliminated from the game, all there's left to do is wait.

"It’s important to give [kids] a foundation that will help them translate their knowledge into ways to help their bodies stay healthy their whole lives, especially when physical activity is no longer a mandatory part of their day." Birckhead says. As a person who hated sports or fitness of any kind until my 30s, I couldn't agree more, which is why we should be encouraging PE games that are fun and not, you know, painful. If a child leaves PE feeling targeted and bullied, chances are they will buck all physical activity for fear they'll always feel that way. We can't help our children learn to love physical activity if the physical activity in PE class is a reason why they don't want to go to school.

At the end of our dinner conversation, my daughter asked me if she could start a petition to ban dodgeball at her school. I told her I thought that was a great idea, and I am so proud of her decision to take a traumatic experience and use it as a catalyst for change. As parents, we all want our kids to feel safe at school, and it's clear that dodgeball is getting is getting in the way.

More Like This
What Is RSV?
Kids With Head Lice Don't Need To Miss School, AAP Stresses In Updated Guidelines
Can Elderberry Help Prevent Illness In Kids? Doctors Weigh In
Experts Explain Whether It’s Safe For Your Baby To Sleep On Your Chest