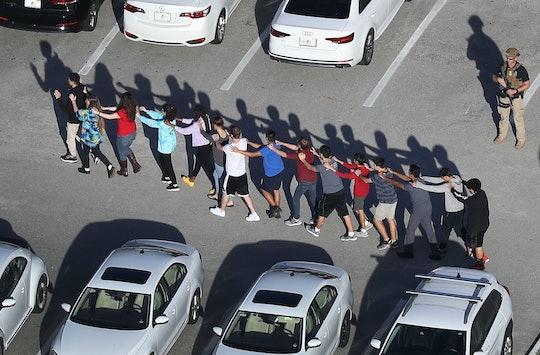 Honestly, I *Refuse* To Prepare My Child For A School Shooting

In a recent discussion on the student-led March for Our Lives, former Senator and current CNN commenter Rick Santorum shared some thoughts. After saying that the march (estimated at 800,000 people in Washington D.C. alone) was funded by "liberal billionaires," Santorum accused youth protesters of not being proactive enough. "How about kids, instead of looking to someone else to solve their problem, do something about maybe taking CPR classes or trying to deal with situations that, when there is a violent shooter, that you can actually respond to that?" Senator, I refuse to prepare my children for a school shooting.

My son is 6, my daughter is 3, and both attend public schools. The older is in first grade and the younger is part of the preschool program. They average one "lock-down" drill a month in their classrooms. My daughter's teacher let me know they'd gone through her first at the beginning of the year "just in case she starts talking about sitting in the dark." My stomach dropped and I immediately felt myself begin to well up. I could tell her teacher felt the same way. "I hate that we do it. But it's really much more for us than them. They don't know what it's for. We just tell them we're playing the quiet hiding game."

My son, who has been doing lockdown drills since kindergarten, still doesn't have a clear concept of why he does them. When I ask him what they're like he's very casual. "We turn off all the lights and sit against the wall in the reading corner," he explains. I think of the layout of his classroom and realize the reading corner is the back-most corner from the door, someplace someone looking in neither the doors nor the windows would be able to see clearly. It's the safest spot. (My daughter's classroom has windows across an entire wall, so there is no safe spot for her. She and her friends sit against their cubbies, and small as they are they can still be seen.)

Whether or not my children survive a school shooting will have nothing to do with their lockdown drill training or knowing what those drills are for. It will be luck.

There are lots of general gun-safety talks in our house, too. What should they do if they ever see a gun? What if they see their friend playing with a gun? I ask playdates if there are guns in the house and, if so, are they appropriately stored? But the school shooting drills? I bring them up only to give my children space to tell me how they feel in case they need emotional support, but other than that I leave the drills at school. I don't do anything to promote or supplement these protocols at home. I don't stress their importance or talk about why they have to have them. I don't explain the best way to survive a school shooting or how to perform CPR on a classmate who has been riddled with bullets from a gun designed to kill as many people as possible quickly. I don't believe that my children, at 6 and 3, need to know that they're rehearsing for the possibility that someone will one day try to murder them at school.

This has nothing to do with shirking parental responsibility or living in denial. I know that we live in a country where gun violence affects children — more than 17,000 children per year, according to the Brady Campaign, a statistic that doesn't include the families and communities of direct victims. That's why I teach my children what they should do if they see a gun at a friend's house, and I believe the advice I give them can help keep them safe. I tell them to stop, do not touch it, walk away immediately, and tell an adult. My hands-off approach to school gun violence is based primarily the clear-eyed, devastating truth that nothing I can tell them to do or not do will keep them from getting killed in an active shooter situation. Whether or not my children survive a school shooting will have nothing to do with their lockdown drill training or knowing what those drills are for. It will be luck.

Someday my children will learn the origins of their monthly choreography, and I imagine it will be less sudden revelation than slow realization. They will piece together the truth from news reports and what they do during lockdown drills will make sense.

Marjory Stoneman Douglas High School had lockdown drills, and the shooter knew how those worked. He knew where students went and what they were trained to do. And even if he didn't know about the specifics, even if he wasn't a former student of the school he attacked (as so many shooters are), any intruder is aware that a school full of students isn't suddenly empty because the doors are locked and the lights are out. In the end, it's just a question of which room he decides to shoot through first. Marjory Stoneman Douglas had an armed guard who, even if he'd charged into the school, handgun blazing, would have been no match for an AR-15. Marjory Stoneman Douglas was and is a school full of young people who grew up with the knowledge that they could be murdered in school. They had over a decade to prepare for this possibility. None of these precautions, well-intentioned though they were, prevented the deaths of 17 people. None of our drills will prevent a future shooting.

Someday my children will learn the origins of their monthly choreography, and I imagine it will be less sudden revelation than slow realization. They will piece together the truth from news reports and what they do during lockdown drills will make sense. Maybe they'll ask me and I'll feel they're old enough to know the truth. Maybe a teacher will beat me to it, or a child on the playground. But whatever they learn will fit in with what they've been exercising for years — dozens and dozens of re-enactments of the moments before their possible death.

This likelihood infuriates me, because it means that we, as a society, accept these hideous acts are somehow inevitable. But they're not, or at least they don't have to be. If I accept a lockdown drill as a reasonable response to school shootings, then I will be less insistent in pursuing more effective measures. Lockdown drills do nothing to truly address the issue of school shootings, except make us complacent towards them.

It isn't up to my kids to do well during lockdown drills. It's up to me to render them obsolete.

Complacency and security theater is not how we will save our children. Stopping gun violence will save them. We know what reduces gun violence: improved funding for programs that address mental, social, and emotional health in schools, and stricter gun laws. Yet many lawmakers, particularly at the federal level, refuse to make the changes we so desperately need.

But the thing about those lawmakers is that they work for me. Their jobs depend on people like me. My children can't vote yet, but I can. It isn't up to my kids to do well during lockdown drills. It's up to me to render them obsolete.

More Like This
The Best Travel Tips For Solo Parenting
A Parent’s Guide To Stomach Pain In Kids
Winter Travel Tips For Families
Tips to Beat Jet Lag, For You & Your Kids
What Parents Are Talking About — Delivered Straight To Your Inbox