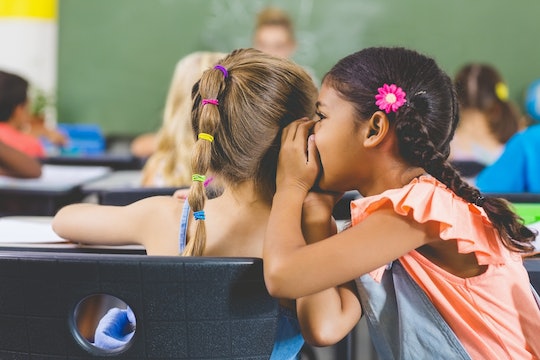 Parents *Must* Teach Their Children To Tattle & Here's Why

"Mama!" my daughter screamed, running towards me in tears. My stomach instantly sank. I knelt down to catch her in my arms and asked, "What happened, baby?" I was eager to understand her distress. "Mama!" she wailed again, and, again, my heart hurt. "Mama, Matthew took the puzzle and threw it all over the place, and then told me I couldn't play with it," she finally sobbed. Quickly, my composure changed from concerned to annoyed. "Stop, tattling. It's not nice," I coolly responded. "Tell him that's not nice," I added as she walked away from me, clearly defeated. I do not encourage children to tattle. It's wrong. No one wants to be friends with a tattle-tale. I have told my daughter this very sentiment many times, in many different ways, using different words and rhetoric.

Words and phrases surrounding telling on someone carry deep, negative connotations. "Snitches get stitches." "Rat." "Snake." "Tattle." "Loose lips sink ships." "Don't be a tattle-tale," I say to my kids, with a stern, "Figure it out," as my follow-up. I want my children to be able to defend themselves without my help. I want them to learn the interpersonal skills that will assist them in handling conflict. I want to encourage open communication between them and their friends. I want their friends to want to hang out with them. Hell, I want them to have friends. And I've been taught, since I was a child, that no one likes a tattle-tale. In fact, as a kid I almost never tattled. There was that one time, in second grade, when I told my teacher a boy kept pulling my hair and pinching me, but all she had to say about the situation was that his behavior meant he probably liked me. Other than that, I kept my mouth shut and kept things to myself.

Last Sunday, the country was in awe of Oprah's Cecil B. DeMille speech during the 2018 Golden Globes, and while her speech was phenomenal and made me ugly-cry, the most poignant moment of the night, for me, was Laura Dern's acceptance speech for her award for Big Little Lies. Dern said, "Many of us were taught not to tattle. It was a culture of silencing and that was normalized." I gasped as she continued, "May we teach our children that speaking out without the fear of retribution is our culture's new north star." I nodded my head, while I mulled over her words. "You're so right, Laura Dern. You're so right." Then I turned to my husband and said, "Crap, I think we screwed up."

Children tattle because they believe they have to follow the rules, regardless. They do not see gray areas of wrongdoing, and they don't understand circumstance. If someone breaks a rule, children tell us, the adults. They confide in us because they believe we can fix anything. They come to us for our support, our guidance, and for justice. But instead of receiving those aforementioned needs, I have realized that all I give my kids is a dismissive "figure it out." I shame them for tattling. I expect them to solve the problem without the proper tools. I thought I was teaching them important life skills, like resilience, accountability, strength, problem-solving. Instead, all I was teaching them is that nothing good comes from speaking up. And that is not a lesson I want my children to learn.

I never considered that the message I was sending to my daughter was "don't report any wrongdoings." Imagine her taking that message into adulthood? Imagine if something serious were to happen and she quickly remembered being dismissed, or even punished for tattling. Imagine how I've failed my daughter. Children take our words and internalize them, and we have little control how they process that information and how it affects them later on in life. We can control, however, what we say.

Laura Dern was right, we do live in a "culture of silencing." We do live in a culture where women aren't believed, are constantly questioned, and are subsequently punished for speaking out. We live in a place where the go-to responses to a woman who speaks out are, "Why didn't she speak up before?" and, "How do we know she didn't initiate it?" That needs to change. Our society is on its way to finally addressing a serious problem of silencing women who report sexual assault. But, as always, it starts with our children. Let's encourage our children to tattle and take the negative connotation out of these words. Let's open that line of communication and trust. Let's help our kids differentiate between a true crime and a misdemeanor. Because when parents teach kids not to tattle, they send them one message: transparency is wrong, and turning a blind eye is right. Let's no longer ingrain silence. Let's take the shame out of telling.