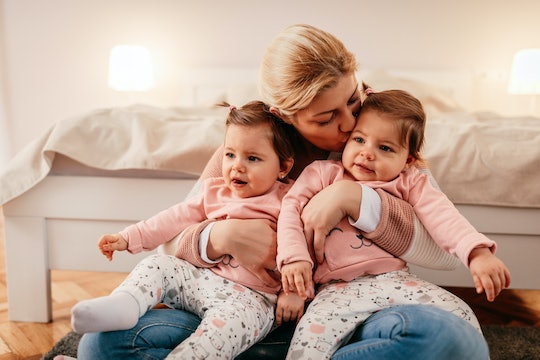 Parents Of Multiples Are More Likely To Have A Mental Illness, & Here's Why

It should go without saying that being a parent is stressful, painful, and exhausting. There is so much work and responsibility that goes into keeping your child safe — a lot of which is not seen outside of the four walls of your home. But for some mothers and fathers, raising twins and triplets may also mean coping with mental health issues not experienced by other parents. In fact, new research has shown parents of multiples are likelier to have a mental illness, but receive less treatment.

A new study published in The Journal of Psychiatric Practice found that people raising twins, triplets, or other multiple-birth kids experience higher rates of mental health issues in early postpartum, including depression and anxiety, than their counterparts, according to The Daily Mail. In particular, the researchers surveyed more than 240 parents, and discovered that 48 percent of participants coped with "extreme mental health issues," but only 10 percent of them received any type of treatment, The Daily Mail reported.

What's more: Parents who aren't married, parents from low-income households, and those who delivered prematurely were significantly more likely to experience severe depression and anxiety symptoms, the study showed, according to PsychCentral. Overall, close to two-thirds of respondents said their doctors didn't speak with them during pregnancy about potential mental health problems they may face after birth, The Daily Mail reported.

Dr. Susan Wenze of Lafayette College and Dr. Cynthia Battle of Warren Alpert Medical School of Brown University wrote in the study, according to PsychCentral:

There is a large, unmet need for mental health treatment in parents of multiples in the perinatal period, especially the early postpartum months.

This is not the first study to show that raising multiples has an impact on your mental well-being. A 2015 study published in The Archives of Women's Mental Health found that mothers and fathers with twins, triplets, or other multiples may deal with worse mental health outcomes than their single kid counterparts. Another study, released in 2008 in the journal Human Reproduction came to a similar conclusion in regard to mothers of twins who conceived through assisted reproduction treatment (ART). Having twins, but not going through ART, is what affected their mental well-being, the researchers found.

The Psychiatric Practice study comes a month after the American College of Obstetricians and Gynecologists (ACOG) released new guidelines in regard to postpartum care. Per the guidelines, ACOG recommended that doctors follow up with new parents within the first six weeks — not three months — after giving birth, and check in regularly throughout the six months to monitor their physical and mental health care. ACOG said it its announcement that these regular follow-ups can help reduce maternal mortality rates, which, along with the infant mortality rate, is still shockingly high in the United States.

Wenze and Battle's research further illustrates the necessity of accessible, affordable, and high quality postpartum care in the United States and around the globe. As with prenatal care, perinatal care is vital not only to the health of the new parent, but to the newborns as well. By receiving adequate medical attention, parents can treat conditions, be it physical or mental, that may impede their ability to parent fully, effectively, and meaningfully.

As the researchers wrote in their study, according to PsychCentral:

We recommend that healthcare providers attend carefully to parents of multiples’ mental health during pregnancy and the early postpartum periods, and proactively integrate discussion of perinatal mental health concerns into their prenatal care regimens.