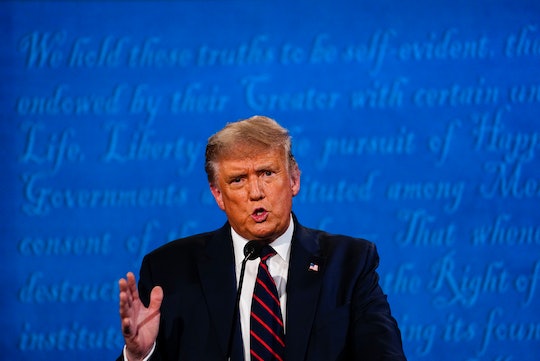 The first presidential debate between former Vice President Joe Biden and President Donald Trump was chaotic, but one moment in particular was especially upsetting for parents. During Tuesday night's debate, moderator Chris Wallace of Fox News asked Trump if he would condemn white supremacy and, once again, he did not.

"Are you willing, tonight, to condemn white supremacists and militia groups and to say that they need to stand down and not add to the violence in a number of these cities as we saw in Kenosha and as we've seen in Portland? Are you prepared to specifically do that?" Wallace asked Trump point blank during the first of three presidential debates scheduled ahead of the election.

"Sure, I'm prepared to do that," Trump responded. "But I would say almost everything I see is from the left wing, not from the right wing. If you look, I'm willing to do anything. I want to see peace."

Trump then asked Wallace, "Who would you like me to condemn?" Wallace circled back to his original question and said, "White supremacists, white supremacists and right-wing militia."

"Proud Boys, stand back and stand by," Trump then said. "But I'll tell you what: Somebody's got to do something about antifa and the left. Because this is not a right-wing problem — this is a left-wing problem."

One mother of Latino children wrote on Twitter that she "cried" during the debate, and that "Trump's refusal to denounce white supremacy was a low point." "I'm just sickened and frightened," she added.

One mom speculated that "Trump lost more suburban mothers and military parents tonight so he could keep a few racists."

Another, who acknowledged that the "whole debate was a sh*t show," wondered "how does one explain" to their children that the President of the United States refused to condemn white supremacy?

Trump's comments had some mothers facing some tough realizations about their own possible privilege. Like one mom who tweeted, "A hard thing (for me) has been realizing the Trump supporters I know and loved were wonderful to me because I'm a white, straight, married, Christian mom. Until all of this I never saw it. White supremacy is evil and we're swimming in it."

One mom simply noted that "it's not that hard" to denounce white supremacy.

CNN's Van Jones, a father of two, also express his outrage. "Trump refused to condemn white supremacy on the global stage in front of my children, and he gave a wink and a nod to a racist, Nazi, murderous organization," he said after the debate.

As horrible as it was for parents to see Trump refuse to denounce white supremacy, one woman shared that her undecided "Republican mother" was moved to vote for Biden while watching the debate.

Many mothers were left feeling devastated by the moment. Like one mother who tweeted, "the commander-in-chief refused to condemn white supremacy on the global stage in front of my children, in front of everybody's families."

Finally, one parent echoed that sentiment, perhaps because it seemed so unreal to see the actual President of the United States refuse "to condemn white supremacy while the world watched as our children and families watched."

This is not the first time Trump was given the opportunity to denounce white supremacy. For instance, in 2017 after a white supremacy rally in Charlottesville saw one person killed and 19 others injured, Trump refused to condemn their actions and instead stated that there were "very fine people" on both sides of the issue.

Trump's refusal to denounce white supremacy, once again, was a low point for the United States. A low point for parents who want their children to grow up in a country that is not brought to its knees by racism. A low point for people who expect more from their president.